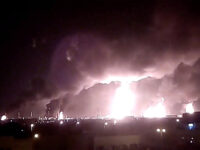 Despite efforts at diplomacy, the war in Yemen continues as the parties to the conflict compete for influence across...