The Strategic Forces Command (SFC) is the only tri-service functional command setup in 2003 to manage and administer all strategic forces (land, air and sea) of India. Its affairs are overseen directly by the CDS or erstwhile Chairman Chiefs of Staff Committee (CCOSC), similar to Andaman and Nicobar Command (ANC). However, during a conflict, the Prime Minister of India can directly order C-in-C SFC to carry out a nuclear strike. 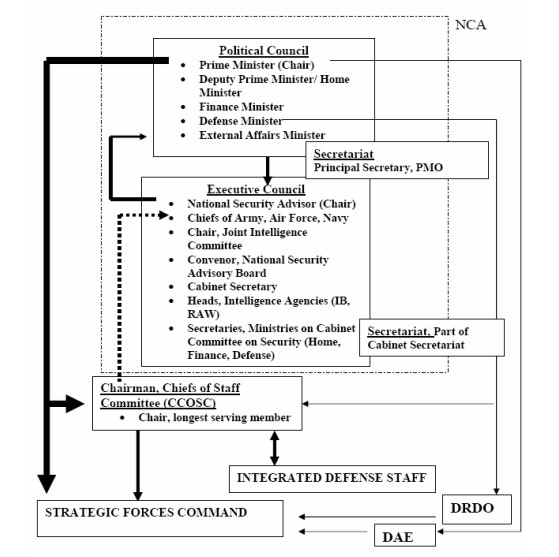 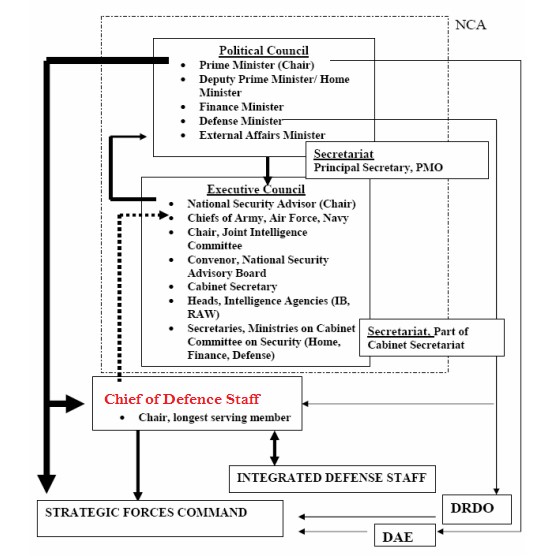 Air Marshal Kumar is a graduate of Mayo College, Ajmer and alumnus of the National Defence Academy.

He was commissioned in the Flying Branch of the IAF as a Fighter Pilot in 1982. He began his career as an Under-Training Operations officer at Tezpur Air Force Station. As a Flying Officer and later Flight Lieutenant, he was attached with the IAF’s oldest squadron, the No. 1 Squadron (“Tigers”) under Central Air Command (CAC). His squadron had relocated to Gorakhpur from Adampur almost a year before his joining and later moving further to Gwalior.

Upon promotion as Squadron Leader, Kumar was deputed as an Instructor at the Flying Instructors School, Tambaram. He was sent back to flying in CAC, this time at No. 7 Squadron (“Battle Axes”), which is an air superiority unit based in Maharajpur Air Force Station. Thereafter, Kumar was sent for international staff course training at the US Air Force Air Command and Staff College. He presented a research paper comparatively analysing the efficacy of Unmanned Aerial Vehicles (UAVs) and manned aircraft in tactical reconnaissance. Kumar was apparently inspired by the efficient employment of UAVs by the Israelis and the US forces during Operation Desert Storm. In his paper, however, he conclusively argued that UAVs could only “complement” rather than “replace” the role of manned aircraft in future warfighting.

On his return to India, Kumar was posted as a Flight Commander at No. 3 Squadron (“Cobras”), then at Ambala, in the Western Air Command (WAC), overlooking Close Air Support and reconnaissance activities for flight operations directed toward Pakistan.

After promotion to Wing Commander, Kumar was deputed as a Flying Examiner at the Aircrew Examination Board in Hindon (WAC). Next, as a Commanding Officer, he returned to lead No. 7 Squadron (CAC). It was during this period (2003) that Kumar was awarded the Vayu Sena (Air Force) Medal for Gallantry during Operation Parakram. According to his award citation, his actions purportedly helped the Indian Army recapture territory that was “lost” to Pakistan. Kumar was later moved to the Air Headquarters (Delhi) as the Deputy Director (Operations).

Upon his promotion to Group Captain, he was elevated to Director (Operations). Later, after completing Higher Defence Management Course at the College of Defence Management (Secunderabad), he was appointed the Chief Operations Officer at 40 Wing in Gwalior (CAC). Units overseen by the wing include No. 1 and No. 7 squadrons, where Kumar had served earlier. More importantly, 40 Wing also supervises the Tactics and Air Combat Development Establishment (TACDE) that imparts training for the IAF’s top-ranked pilots in operational doctrines. Subsequently, he was sent on deputation to Israel as the Team Lead of IAF’s Project Monitoring Team for Airborne Early Warning and Control System (AWACS). The foundation for this project was laid after a $1.1 billion deal between India, Israel and Russia was signed in 2004. By the end of this particular assignment (November 2010), Kumar successfully oversaw the transfer of two (out of three total) Russian-made IL-76 aircraft mounted with Israeli “Phalcon” airborne early warning radars.

After being promoted to the Air Commodore rank, he was appointed the Air Officer Commanding of 18 Wing, headquartered in Pathankot (WAC), which oversees operations of No. 26 Squadron (“Warriors”) and No. 125 Helicopter Squadron (“Gladiators”).

Kumar moved back to AHQ as the Director of IAF’s Project Monitoring Team attached with Aeronautical Development Agency (ADA) in Bangalore, where he supervised work on India’s indigenous Light Combat Aircraft (LCA) Tejas. He was promoted to Air Marshal but retained for an extended-term. During this time, the IAF received its first two LCA Tejas aircraft leading to the formal inauguration of a new No. 45 (“Flying Daggers”) Squadron. After his near 5-year stint at ADA, Kumar was transferred to Eastern Air Command (EAC) as Senior Air Staff Officer, where he played a key role in preparedness against China.

Beginning in 2019, Kumar was appointed Air Officer Commanding-in-Chief (AOC-in-C) of CAC. During the standoff with China along the Line of Actual Control (LAC), he visited the Chief Minister of Uttarakhand, an Indian state bordering China and Nepal, requesting strategic sites for the installation of air defence assets and setting up an advance landing ground.

A major segment of Air Marshal Rajesh Kumar’s career was spent in formations that senior analysts believe have responsibilities for undertaking nuclear strike missions. Figure 3 and its associated table prepared by this author provide a better understanding of Kumar’s prominent service and command postings. They indicate that Kumar has accumulated flight, staff and command (full spectrum) experience in various formations of CAC. 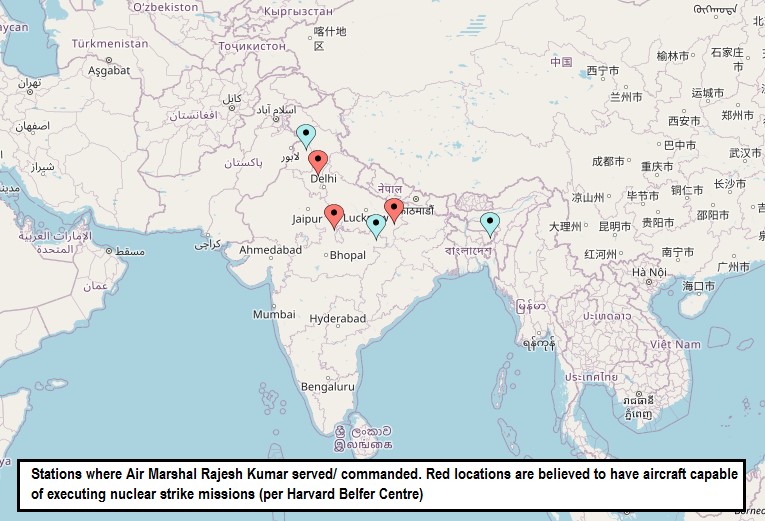 Compiled by the Author

Kumar’s experience in the CAC, including multiple project management experiences with Air Headquarters (PHALCON AWACS) and DRDO (ADA), make him an ideal candidate to lead the SFC.

Since its inception, the SFC’s command has been dominated by IAF. Out of his ten predecessors to C-in-C, six belonged to IAF. Then serving Air Marshal Jasbir Walia took the reins of SFC after routine rotational service headships. Following India’s so-called “surgical strike” in Pakistan (September 2016), the IAF has retained control of India’s strategic forces. Walia was succeeded by Air Marshal Dhillon. Indian Defence Minister Rajnath Singh, while addressing a political rally, claimed that his party’s government had executed three “surgical strikes” in five years, two of which were allegedly executed in Pakistan. It is reasonable to proffer that fearing a “strategic” response from Pakistan; the Indian Armed Forces agreed to have an Air Force official leading the SFC. This arrangement also underscores the particular importance that India’s strategic establishment accords to air power in nuclear deterrence.

The ultra-nationalist government of the Indian Prime Minister Narendra Modi appears bent on promoting strategic instability in South Asia. In November 2018, New Delhi deployed the submarine INS Arihant for a “deterrence patrol” in response to what Prime Minister Modi dubbed as “nuclear blackmail”, thus completing India’s nuclear triad. It remains unclear who was being referred to. A few months later, during the standoff with Pakistan (February 2019), INS Arihant was re-deployed as a “show-of-force”, latter having reasonable grounds to interpret the move as an irrational escalation of conflict dynamics.

Since May 2020, violent border skirmishes between India and China have been occurring on a regular basis; the latest media reports indicate that talks between both sides have failed to break the deadlock. To signal its preparedness, India conducted ten missile tests in a span of just over a month near the end of 2020; these included the strategic missiles “Prithvi II” and “Shaurya”, supersonic cruise missile “BrahMos” and subsonic cruise missile “Nirbhay”. Reportedly, the DRDO was directed by the Prime Minister Modi-led union government to “fast-track” its missile programme in the early part of the Indo-China standoff since New Delhi had “doubts” about reaching an agreement with Beijing. During this timeframe, the IAF chief Air Chief Marshal Rakesh Kumar Singh Bhadauria stated that his force was prepared for a “two-front war” (referring to Pakistan and China).

Kumar’s tenure at SFC will coincide with the Indian leadership’s ambitious agenda of establishing geographic theatre commands by 2023.

The SIPRI (Stockholm International Peace Research Institute) Yearbook 2020 reported that India’s nuclear stockpile increased the preceding year. While India may think twice about fighting China in a nuclearised environment, concerns remain, particularly among the Chinese analysts, that India would not hesitate from deploying its strategic arsenal during a war with Pakistan. This would be at a greater cost to New Delhi’s prestige since its repeated narratives attribute stockpile build-up as a response to purported Chinese expansion.

A pressing and controversial issue is that Air Marshal Rajesh Kumar will report to CDS General Bipin Rawat, who remains a 4-star officer and hence only “first among equals” to the services chiefs. Concerns have been rightfully expressed that since India’s National Security Adviser heads the NCA’s Executive Council, the CDS would be answerable to him and remain a “part-time boss” for the C-in-C SFC. In his second term after re-election (2019), Prime Minister Modi upgraded the status of his handpicked NSA (Ajit Doval) equivalent to Cabinet Minister rank, effectively enhancing his political weightage in the NCA. In such circumstances, the C-in-C SFC would essentially be receiving higher-level “guidance” more from the NSA than the CDS himself, not that the latter is any more succinct when it comes to thinking out loud.

Kumar’s tenure at SFC will coincide with the Indian leadership’s ambitious agenda of establishing geographic theatre commands by 2023. While the timeline given to the incumbent CDS is impractical at the outset, it will be interesting to see what functional relationship the C-in-C SFC has with theatre commanders, if at all the agenda materialises.

Keeping in view India’s growing interest in maritime counterforce posturing and insufficient budgetary allocation (2021-2022) for naval force modernisation, it is reasonable to speculate that Air Marshal Rajesh Kumar would accord special attention to improving the sea-based leg of India’s nuclear deterrent. Time will tell.