Maritime defence relations between Pakistan and Turkey go as far back as 1967, when the computers of Pakistan’s US-origin submarine, the PNS Ghazi, were upgraded at the Gölcük Naval Shipyard. In 1988, a joint Pak-Turk Military Consultative Group (MCG) was established which, by the turn of the second millennium, evolved into a High Level Military Dialogue Group (HLMDG).

Pakistani and Turkish naval forces have participated in a host of joint and multinational exercises hosted separately or in regional forums such as the Combined Maritime Forces operating under the United States Naval Forces Central (USNAVCENT). Pakistan Navy participated in Turkish Navy’s ‘Mavi Balina’ (Blue Whale) exercises since 2012 for Anti-Submarine Warfare Drills in the Eastern Mediterranean, including the ‘Doğu Akdeniz’ (Eastern Mediterrean) exercises. Similarly, the Turkish Navy remained a prominent participant in Pakistan Navy’s ‘Aman’ (Peace) exercises since 2007.

The name ‘Turgutreis’, alternatively known as ‘Dragut’, literally means ‘The Drawn Sword of Islam’ in reference to an Ottoman naval commander of the same name.

Both navies have two prominent joint naval exercises, the ‘Turgutreis‘ and ‘Ayyildiz‘. The name ‘Turgutreis’, alternatively known as ‘Dragut’, literally means ‘The Drawn Sword of Islam’ in reference to an Ottoman naval commander of the same name. Dragut/ Turgutreis is renowned as one of the greatest maritime commanders of the Mediterranean with considerable sway in North Africa. The term ‘Ayyildiz’, meanwhile, refers to the moon and star distinctive of the Turkish flag.

This article focuses specifically on the ‘Turgutreis’ exercises between Pakistani and Turkish navies.

Turkish Navy participated with the TCG Gelibolu, a US-built guided missile frigate that was transferred to Turkey in 1999. It was in service with the US Navy as USS Reid (1981-1998). The frigate is known to be embarked by US-built Sikorsky SH-60 Seahawk helicopters for ASW and surface operations, but media reports could not corroborate deployment during this particular exercise.

Pakistan Navy assets included two Chinese-built guided missile frigates, PNS Saif and PNS Aslat. PNS Saif is dubbed the “front line destroyer” of Pakistan Navy’s fleet. It is usually embarked with the Chinese-built Z9-EC helicopters for ASW, including maritime surveillance and transportation. The PNS Aslat meanwhile, is usually embarked with French-built Alouette III light utility helicopters. Both are F-22P Zulfiquar-class frigates built jointly in China and Pakistan and can undertake a variety of maritime missions in a multi-threat environment.

Other assets included fast attack missile boats PNS Quwwat (German-designed), PNS Azmat (Chinese-built) and PNS Zarrar (Turkish-built) and Chinese-built replenishment tanker PNS Nasr for refuelling operations. The PNS Quwwat along with its sister PNS Jurrat are part of the German-designed Jurrat class that are reportedly scheduled for replacement by Chinese-built Houbei class ships used by the People’s Liberation Army Navy (PLAN) of China. The PNS Zarrar is part of the Multi-Role Tactical Platform (MRTP) concept. These fast attack crafts are specially designed for naval special operations forces and can perform roles such as VBSS, surveillance, coastal defence and Search And Rescue (SAR) missions.

The second joint naval exercise was hosted by the Turkish Navy in the Eastern Mediterranean from September to October 2018. Some of the drills involved Combined Anti-Submarine Exercises (CASEXes), Air Defence Exercise (ADEX), Gunnery Firings and Surface Warfare Exercises (SURFEX) etc.

It was the first edition of Exercise Turgutreis in which a senior Pakistan Navy official was present. Then Commander Karachi (COMKAR) of Pakistan Navy held important meetings with his Turkish counterparts, including then Flag Officer Commanding of Aksaz Naval Base and then Commander of Turkish Navy’s Southern Task Group. This high-level representation, perhaps due to Exercise Mavi Balina-2018, was different from the maiden Turgutreis-I in which the highest representation was by the Consul General of Turkey in Karachi, not even the Ambassador in Islamabad.

The third joint naval exercise was hosted by Pakistan Navy in the North Arabian Sea in February 2019. It was held concurrent to multinational exercise Aman-19 hosted by Pakistan. It mostly involved table-top discussions in harbour to discuss naval warfare tactics and areas of mutual cooperation. Sea phases involved manoeuvres for consolidation of tactical skills and improving interoperability.

Guided missile frigate TCG Gökçeada (erstwhile USS Mahlon S. Tisdale of US Navy) was the sole Turkish Navy asset participating in the exercise whereas Pakistan Navy assets included multi-role guided missile frigate PNS Alamgir (also US-built), PNS Aslat (Chinese-built) and an unspecified long-range Maritime Patrol Aircraft (MPA). Pakistan Navy maintains US, French-Italian and Dutch-origin MPAs. On account of platform interoperability and reach, the US-built Lockheed P-3 Orion was the most likely participant. It is unclear if any helicopter (US-built Sikorsky SH-60 Seahawk or Italian-built Agusta AB-212) was embarked on TCG Gökçeada during this exercise. It is also unclear if the PNS Alamgir was embarked with the Z9-EC ASW helicopter for this exercise.

Unlike Turgutreis-II, there was no representation by any senior Turkish naval commander nor did media reports indicate the presence of any diplomats from Islamabad. Attendance by the Turkish Naval Attaché, however, would be customary on account of Aman-19.

Information about sea and harbour phases of Turgutreis-IV, including participating naval assets, are conspicuously not available. However, if details of assets participating in Dogu Akdeniz-19 are to be followed, Turkish Navy assets included guided missile frigate TCG Giresun (erstwhile USS Antrim of US Navy) whereas Pakistan Navy assets included the US-built frigate PNS Alamgir with embarked Z9-EC ASW helicopter of Chinese origin (as in the past) and Lockheed P-3 Orion, also of US origin.

There were reports in the Greek press alleging that Pakistani and Turkish navies ‘violated’ the country’s territorial waters off Kastellorizo and north of Rhodes during the conduct of Dogu Akdeniz-2019, prompting a demarche to Islamabad. The reports further claimed that Greek defence sources perceived (alleged) Pakistani violations as “part of Turkey’s attempt to prove that it has military alliances and is not an isolated force in the region”.

The fifth joint naval exercise was again hosted by the Turkish Navy in the Eastern Mediterranean Sea in November 2020. It was held concurrent to multinational exercise ‘Mavi Balina 2020’ (Blue Whale) hosted by Turkey, and a separate Coordinated Patrol (CORPAT) held jointly.

Information about participating Turkish Navy assets has not been disclosed. Pakistan Navy’s China-built guided missile frigate PNS Zulfiquar embarked with Chinese-built Z9-EC ASW helicopter for the exercise. Representation in the exercise was limited to the ship’s Commanding Officer who held meetings with Flag Officer Commanding of the Aksaz Naval Base. 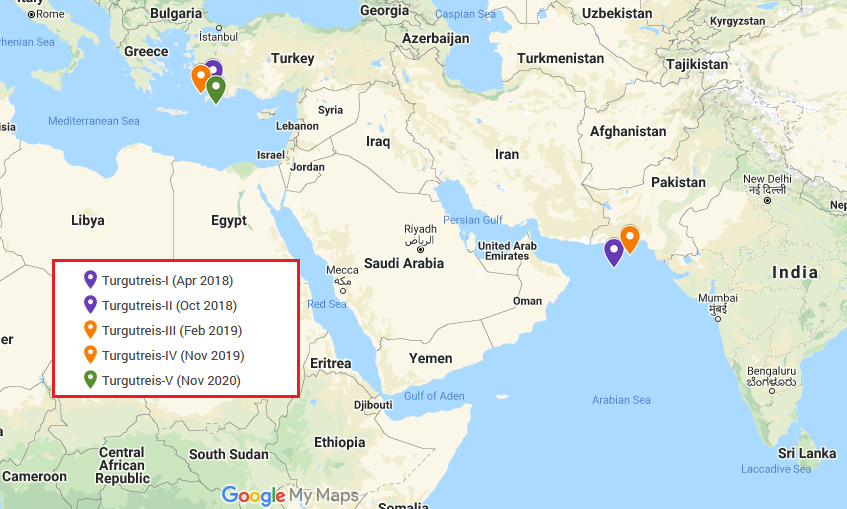 (Plotting by the author (locations are approximated, not accurate))

Exercise Turgutreis is the only joint Pak-Turk naval exercise to be held in two separate oceans, i.e. the Indian Ocean (North Arabian Sea) and the Atlantic Ocean (Mediterranean Sea). It brings together two key maritime actors from their respective primary areas of interest. As mentioned earlier, Exercise Ayyildiz is another joint Pak-Turk naval exercise, but its scope is confined to naval special operations.

(Based on open-source data compiled by the author from various Turgutreis editions; the probability of error exists due to undisclosed information in some cases)

Available information indicates that Pakistan participated more extensively in Turgutreis exercises across the spectrum of maritime operations. Participation of Turkish naval aviation assets has not been reported. Pakistan, meanwhile, participated with helicopters of ASW capability including MPAs. It is interesting to note, however, that Turgutreis-V did not include any MPA.

Surface combat capabilities, apart from naval special operations, appear to be the focus areas of Pak-Turk joint naval exercises. The deployment of American, Chinese and Turkish platforms in these exercises aims to promote interoperability. 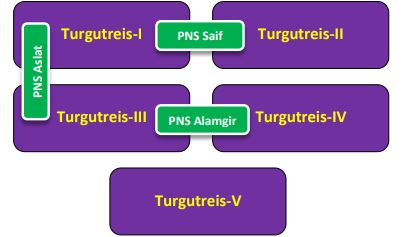 Three of Pakistan Navy’s frigates Saif and Aslat (Chinese-built) and Alamgir (US-built) participated twice in different editions of exercise Turgutreis exercises. These three frigates are crucial participants of Regional Maritime Security Patrols (RSMP) instituted by Pakistan Navy and have visited countries such as Saudi Arabia, Oman, the UAE and Egypt, to name a few.

The Turgutreis exercises could augment Pak-Turk naval partnership in the Western Indian Ocean. These exercises need to be elevated at a level so that senior Turkish naval commanders and their Pakistani counterparts, not below the Rear Admiral rank, can engage in detailed at-sea interactions also, apart from at-harbour engagements.

The existing momentum appears to be progressing at a slow pace and needs to be enhanced in lieu of increasing geopolitical contestation around the Red Sea and the Horn of Africa.

Future exercises under the banner should, ideally, include the Turkish naval base in Somalia. It could help Islamabad signal its resolve to deter maritime aggression by a revisionist and irresponsible nuclear-armed India.