Cleaving the Leadership, Resurging the Taliban

The unending War on Terror has the observers tethered to the media. The plain old fashioned geopolitical intrigues are now compensated with talks on militant groups, their causality, utopian ambitions, fear factor and effects in long run. This is how asymmetric engagements play out – those who intended to frustrate the terror are feeling vexed in themselves.

A drone strike by the US Joint Special Operations Command on the parched expanse of Balochistan decimated the leader of Taliban approximately a month ago. The tumultuous uproar that accompanied the collective sigh of relief from the stakeholders in Afghanistan failed to factor in the corollary of the rules of engagement set by the United States in the last 16 years: elimination of key terrorist leaders in isolation doesn’t bode well for global peace.

Coined as decapitation strikes that aim to obliterate the command and control mechanism of a militancy edifice, the strategy has not yielded significant dividends for the incumbent counter-terrorism regime post 9/11. Demonstrable through numerous examples, this posteriori maintains that severing the leadership from the core has not halted Taliban momentum over the years.

The key operational commander of Taliban, termed as the backbone of the so called Islamist Movement, Daadullah Akhund was killed in a commando raid spearheaded by NATO in May 2007. Undeterred, a swift replacement of Daadullah was announced by the Taliban. Less than a year earlier in December 2006, the USAF strike had ceased the life of Akhtar Osmani, the ex-corps commander of Kandahar and one of the potential successors of Mullah Omar. By fall 2008, the entire command corpus of Taliban was effectively liquidated by the international coalition forces in Southern Afghanistan yet the militancy continued unabated.

Decapitating the top figureheads more amenable to political dealings didn’t help end the militancy either. In the initial days of the commencement of Operation Neptune Star, Abdul Salam Zaeef, the co-founder of Taliban was apprehended and handed over to the American authorities by Pakistan. It wasn’t a significant lurch for Taliban and their resistance gained momentum. Three high ranking Taliban political officials; the Quetta Shura leader and Abdul Ghani Baradar were held captive along with Mir Mohammad and Abdul Kabir, the shadow governors of Baghlan and Kunduz respectively in 2010. Sharp spikes in the terror onslaught were recorded in the following period. 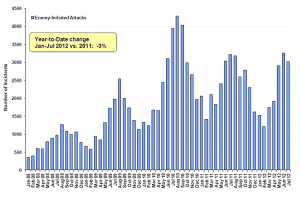 A similar trend was observable after the news related to the demise of Taliban founder Mullah Mohammad Omar officially leaked out in the mid-2015. The major setbacks for Afghan government following this media development variably resulted among others, in the fall of the Kunduz city in the North to the Taliban and a deadly attack on the Kandahar airport in which death figures tolled to 50. A damning semi-annual Pentagon assessment report starkly stated that the Afghan casualties, civilians and security personnel alike rose 27 percent from January 1 to November 15, compared with the same period in 2014.

Striking Akhtar Mansour off can rile the stakeholders with a genuine predisposition to peace once again. His nonchalance to peace overtures through the Quadrilateral Coordination Group created in December 2015 to revive the stalled peace process irked many, but it needs to be understood that Akhtar Mansour was a pragmatist, comparably a suave fellow vis-à-vis the ascetics who follow him through. There was more chance to reach a negotiable settlement with Taliban while Mansour was at the helm of affairs as compared to Haibatullah, a reclusive chief justice of the Taliban shadow bureaucracy. The appointment of Haibatullah has also sealed the fissures that cracked through the Taliban organisational hierarchy at the time of Mansour elevation as the supreme leader of movement. Six out of 18 members of the Taliban highest consultative council opposed Akhtar Mansour as their leader, the same day he was picked. But Haibatullah Akhundzada succession has not faced any hurdles of such nature. The Afghan Taliban are in lesser disarray now as they were a year back.

It is worth remembering that the Taliban regime has proved its mettle as a committed insurgent group since the last two decades. Due to nature of their allegiance to the movement, it can safely be assumed that they will not lay down their weapons if the leadership is severed from the top. Taliban commanders on a local level enjoy significant autonomy which aids them in guerrilla warfare. It is also their strength. Such decentralised militancy organisations are more resilient as they are flexible enough to adapt to local contexts.

Hereby, the schematic of how to go about in establishing a lasting accord takes a frontal position.

The efforts for sustainable peace should be conjoined with the process of nation building in Afghanistan under the sole command of Afghan stakeholders. In this context, it should be noted that the task of nation building, more so when enforced upon the indigenous by the non-natives of the land, has proved to be disastrous with time. Afghanistan has a proven track record of one such failure in the re-instatement on throne of former disgraced monarch Shah Shuja Durrani by the British Raj in 1839. This experimentation didn’t augur well as the authority of the King was overshadowed by the indirect supporting rule of Victorian government. As a result, the perceived legitimacy of Shah Shuja plummeted and ruined his government in 1841. This is a compelling reminder that seeks to dissuade the external governments from broad involvement in Afghanistan affairs, a position that Pakistan has officially maintained in the Quadrilateral Coordination Group meetings.

Apart from it, the internal divisiveness stemming from ethnic polarization has created a stalemate situation which the Taliban insurgency readily exploits. Demographic disparity (of Pashtuns, Tajiks, Uzbeks, and others) has played a degenerative role in Afghan politics, yet the woeful negation of it, evident from the absence of this elemental consideration from the security, social, and political architectures can be understood as the casus belli which the insurgents have factored in their strategic calculus.

Lastly, for the current administration, it may seem daunting, exemplified by the tendency of local warlords in Afghan society to stand against any ruler who appears to centralise authority in Kabul. But until a consensus for lasting peace is forged within the tribal order and common symbolism, culture, and literature is cherished and promoted, the destabilising forces will keep on impeding the process for a peaceful future.

is the Director Academics at the Centre for Strategic and Contemporary Research.