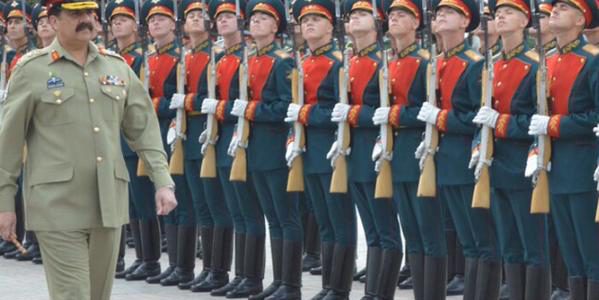 He touched down the USA in the mid of November for his second visit to the USA. As part of his visit, he met both the civil and military leadership of the USA.

On 17th November, he met the CIA Director John Brenan. During the meeting, regional security issues were discussed. Raheel Sharif emphasized for permanent stability in the South Asian region. He also called for conductive environment for re-initiating Afghanistan owned and led peace talks with Afghan Taliban.[1] The CIA director, on his part, acknowledged the accomplishments of the Operation Zarb-e-Azb.  He also appreciated the positive impacts of the operation for Pakistani security situation.

Later that day, Raheel Sharif visited Pentagon where he met US Defence Secretary Ashton Carter. During the meeting, Pak-US defence relations and regional security issues were discussed. Defense Secretary Carter emphasized that US values Pakistan and looks at Pak-US relations independent of all other countries.[2] He also appreciated Pakistani contribution and sacrifices for war on terror and acknowledge that effects of successful counter-terror (CT) operations are opening opportunities for regional peace. He also assured the Pakistani Army Chief that US will always support Pakistan in fighting terrorism and extremism. The Pakistani Army chief presented Pakistani perspective of the regional challenges. He said that Pakistan is resolved to eliminate terrorism and extremism from its soil.

Gen. Raheel also met US Secretary of State John Kerry. Secretary John Kerry emphasized that Pak-US relations are independent of all other countries. Both officials discussed regional security including Afghanistan, India and need for regional stability. Gen. Raheel highlighted the need for resolution of Kashmir to ensure lasting peace in the region.[4] The topic of Afghan-owned reconciliation also dominated the discussion between the two officials. John Kerry acknowledged Pakistan’s contributions and enormous sacrifices in fight against terror. John Kerry acknowledged Pakistan’s contributions & enormous sacrifices in fight against terror. Gen. Raheel reiterated Pakistan’s desire to strengthen Pak-US relations based on mutual interest and respect.

Gen. Raheel met members of two US Senate Committees, Chairman Richard Burr and Vice Chairman Dianne Feinstein and discussed matters related to regional issues and counter terrorism.[5] Both US Senate members appreciated Pakistan’s effort in anti-terror war and the country’s anti-terrorism strategy which resulting eradicating the threat of terrorism in North Waziristan area and on both sides of Pak-Afghan border. They also assured the COAS of their full support and co-operation in this regard.

On 20th Nov, COAS met US Vice President Joe Biden at the White House where he discussed strategic issues of mutual interest.[6] Vice President appreciated Pakistan’s crucial role for peace and realized Pakistan’s enormous sacrifices both in terms of economic as well as human loss. This meeting was very important in terms of regional and economic stability. He also expressed satisfaction over Pak-US cooperation on defense and for countering terrorism.  He also talked about the importance of the China-Pakistan economic corridor for Pakistan and said that it would bring greater economic prosperity to the whole region.[7]

Gen. Raheel also visited  Pakistani Embassy where he addressed the Pakistani community in which he ensured public that Pakistan armed forces will destroy the terrorist activities to maintain peace and security in the country.[9]

The COAS visited the Brazilian Defense Ministry where he met with the Defense Minister Aldo Rebelo. During the meeting, the COAS discussed matters relating to Pak-Brazilian defense cooperation, matters of mutual professional interest, bilateral military ties and also discussed about the benefits of anti-narcotics experience. the Brazilian minister of defense offered security assistance from Pakistan for the upcoming 2016 Olympics games due to be held in the South American country.[11]

Following the Paris attacks, the security of Rio Olympics 2016 have become a concerned for Western governments. The organizers have planned to deploy 85,000 security personnel for the first South American Olympics, doubling the number of security personnel deployed during the 2012 London Olympics.[12] Brazil is co-ordinating with several countries including France and USA to improve security for the 2016 Olympics.[13]

On 25th November, General Eduardo Villas Bôas, commander of the Brazilian Army, on behalf of his government awarded COAS “Order of Merit” in special Ceremony in recognition of his leadership for successful fight against multiple threats. Gen Raheel is the first Asian to have received this Award.[14]

After US and Brazil’s visit Gen. Raheel Sharif visited the Ivory Coast on Friday 27th November where he spent a day with the Pakistan Army contingent deployed as part of UN   peacekeeping force. He acknowledged the sacrifices of Pakistani troops in the UN peacekeeping operations and tribute to officers and men for their commitment to promote peace and stability in the world.[15]

Pakistan is an active player in UN peacekeeping forces.[16] Over the past 55 years Pakistan is contributing the most significant and outstanding performance in UN Peacekeeping missions. Number of world leaders and the UN leadership applauded the performance of Pakistan’s peacekeepers.  Pakistani peacekeepers have left no stone unturned in the noble cause of helping humanity, building peace and bringing stability across the regions under the banner of United Nations.

The visits of General Raheel to USA, Brazil and Ivory Coast were both productive and fruitful. General Raheel presented the Pakistani perspective for lasting peace in the South Asian region to both civil and military leadership of USA. The visit to Brazil will also play a key role in further strengthening Pak-Brazil relations.