Gen Pande has set a new precedent by becoming the first officer from non-combat arms (Corps of Engineers) to become COAS. This distinction might have been unimaginable until a few years ago. His successor as VCOAS (Lt Gen Raju) has also set a new benchmark since he has not been Army Commander of any geographic command prior to this appointment. Lt Gen Raju’s successor at DGMO (Lt Gen Katiyar) comes from the 1 Corps strike formation. 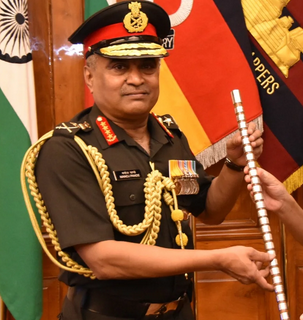 Gen Pande assumed charge as the 28th COAS. He graduated with a Bachelor of Science degree from the 61st course of the National Defence Academy (NDA), after which he joined the Indian Military Academy (IMA). He was commissioned into the Bombay Sappers (Corps of Engineers) in 1982. He completed higher defence education within India from Army War College (Mhow) and National Defence College (Delhi), and also a course from the Joint Services Command and Staff College (UK).

During the Pak-India military standoff 2001-2002 (dubbed “Operation Parakram” by India), he served as Commanding Officer of the 117 Engineer Regiment that was operating from Pallanwala in the Akhnoor district of Indian-Occupied Jammu & Kashmir (IOJ&K). After his staff course, he was assigned to the 8 Mountain Division in the Dras sector (again IOJ&K) as “Colonel Q” or Additional Deputy Quarter Master General, responsible for logistics that include ration, fuel, transport, ammunition, equipment repair etc. In this position, he coordinated closely with the Master General of Ordnance and Engineer-in-Chief branches within Army HQ.

Upon promotion to Brigadier, he led the 474 Engineers Brigade (Kharga Engineers), which is based in Zirakpur (Punjab) and forms part of the Ambala-based 2 Corps (alternatively known as Kharga Corps). The corps is a strike formation that possesses almost 50% of the Indian Army’s offensive capabilities and is oriented specifically toward Pakistan. After this term, he was deputed back to IOJ&K to lead the 52 Infantry Brigade; this appointment was rather unusual for a sapper since command of sensitive areas in IOJ&K is usually entrusted to officers from the infantry or armoured corps. This would suggest Pande’s command experience was exceptional and motivated his superior officers to depute him in an area brimming with insurgency allegedly sponsored by Pakistan. Later, during his education at NDC, Pande wrote his thesis on “Disaster Management in India”.

On attaining 3-stars (Lt Gen), Pande was transferred to HQ Southern Command as Chief of Staff before moving to Eastern Command theatre as GOC 4 Corps (Gajraj Corps), which commands mountain divisions overlooking China from Arunachal Pradesh and Assam. This coveted appointment was another distinction for a sapper. Pande was moved further east as Commander-In-Chief Andaman and Nicobar Command (CINCAN), where he was responsible for the timely completion of high-profile military infrastructure. Yet again, Pande made history by being the first sapper stationed in the archipelago.

In mid-2021, Pande returned to Eastern Command as Army Commander, responsible for the entire geography along the Line of Actual Control (LAC) with China. Less than a year later, being the senior commander, he was called to Army HQ to assume charge as VCOAS. He held this position for barely two months before being promoted to full General and incumbent COAS.

Several Pakistan-based “analysts” have proffered that Pande was nominated as COAS on account of his purported links with the Hindu extremist Rashtriya Swayamsevak Sangh (RSS), ideological patron of the ruling Bharatiya Janata Party (BJP), or his origins in Maharashtra. This is a ridiculously narrow-minded view laced with unconfirmed theories.

Pande’s father, Dr C.G. Pande, who retired as Head of Department (Psychology) at Nagpur University, once led the Nagpur Rationalist Association (affiliated with the Indian Rationalist Association). Secondly, assuming Gen Pande had “RSS links”, it would have been mandatory for him to receive the 4-level training in Sangh Shiksha Varg (training camps) that is mandatory for each “karyakarta” (functionary). The basic Level 1 (prathamika shiksha varg) starts from 14-18 years of age. During his mid-teens (when Level 1 of RSS training starts), Pande had already entered NDA (criteria for intake is age range 15.7 to 18.7). By age 20, he was already commissioned as a Second Lieutenant after passing IMA.

While there is sufficient yet underappreciated evidence of politicisation within Indian Armed Forces rank and file, reducing an accomplished professional as a purported ideological asset by overlooking family history, upbringing and without evidence reeks of ignorance. 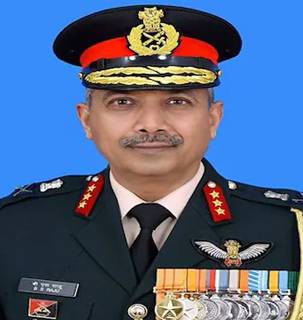 Lt Gen Raju is a graduate of NDA and later went to IMA, from where he was commissioned into the Jat Regiment (Infantry) in 1984. It is also worth mentioning that he is a qualified helicopter pilot.

As a Colonel, he commanded a battalion during Operation Parakram along the LoC with Pakistan. He was retained in the western theatre after subsequent promotions. As Brigadier, he commanded the 12 Infantry Brigade (Kalapahar Brigade) in Uri (IOJ&K) when former COAS late General (then Major General) Bipin Rawat was GOC 19 Infantry Division. He also completed higher defence education from NDC during this rank.

Upon promotion to Major General rank, Raju was appointed GOC of Counter Insurgency Force (Victor) under Rashtriya Rifles which looks after Anantnag and Pulwama districts in southern IOJ&K. During this term, he advocated for the establishment of robust juvenile detention centres for “misguided” teens of IOJ&K. Raju was later GOC 15 Corps (Chinar Corps) in Srinagar (IOJ&K). During this term, he issued several statements amplifying the BJP’s political rhetoric against Pakistan, from accusing the western neighbour of attempting to increase cross-border infiltration out of frustration post illegal annexation of IOJ&K to an unequivocal appreciation of scrapping Article 370 itself.

On promotion to Lieutenant General, Raju was appointed DGMO. During this tenure, he was a direct supervisor of the Indian Army’s preparedness against perceived Chinese belligerence along the LAC. He succeeded then reported to Lt Gen Paramjit Singh Sangha, who was elevated to be the first Deputy Chief of Army Staff (Strategy), responsible for overall Intelligence, Operations, Strategic Plans and Logistics. Sangha was in a position somewhat equivalent to the Pakistan Army’s Chief of General Staff. Raju’s past terms as an experienced counterinsurgency specialist may have factored major consideration for this appointment as his then-superior (Sangha) had previously managed the 2019 escalation with Pakistan.

Later, Raju was elevated to VCOAS despite not having experience in commanding any geographic command (Western Command, Northern Command etc.). This is not unprecedented, though; in the Indian Army’s history, Gen Sunith Francis Rodrigues had also been appointed VCOAS before moving on to lead Central and Western Commands and finally becoming COAS. Typically, an Indian Army VCOAS serves for a minimum of two years on the designation; with incumbent COAS reaching retirement age in 2024, Raju technically still stands a chance of succeeding him. However, the likelihood of this is very low since no COAS has been appointed without experience leading at least one geographic command/theatre. It is reasonable to speculate Raju will be sent for a regional command assignment before superannuating. 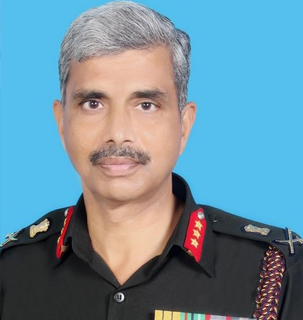 He was an instructor in the Indian Military Training Team in Bhutan and also the DSSC. He commanded his battalion (23rd Rajput Regiment) twice along LOC (IOJ&K) and LAC (Arunachal Pradesh). During his early career, he also served as General Staff Officer-1 (GSO-1) in Military Operations Directorate.

On promotion to Brigadier rank, he commanded an Infantry Brigade along the Pakistan border and later served as Brigadier General Staff in a Corps HQ.

When he was promoted to Major General, Katiyar served as Additional Director General (Staff Duties) in Army HQ. Further tenures during this rank are not known.

After attaining 3-stars, Katiyar was appointed as GOC 1 (Strike) Corps based in Mathura (Uttar Pradesh) which comes under South Western Command. It is one of the Indian Army’s reserve strike forces that has recently focused almost exclusively on the northern border with China. Recently, the outgoing COAS Gen Naravane visited 1 Corps to review its operational preparedness.

Gen Pande happens to be a course mate (61st NDA) of the incumbent air and navy chiefs (Air Chief Marshal Vivek Ram Chaudhari and Admiral Radhakrishnan Hari Kumar, respectively). Apart from this personal bonhomie, he has enjoyed considerable inter-service interactions as a former CINCAN. Thus, it is quite likely that tri-service synergy will be strengthened. Realistically, however, the consensus among services on the realisation of integrated theatre commands would still be difficult to achieve because of continued apprehensions of the Indian Air Force. From a pure land forces perspective, Pande’s continued rise and establishment of multiple precedents for sappers have laid broken the monopoly jealously guarded by officers from combat arms, particularly the infantry. With considerable service in the western sector overlooking Pakistan, Pande brings his unique background to strengthen the role of combat engineers in conflict zones. As the nature and character of warfare evolve, smart technologies will be essential to gaining battlefield advantage. A technical leader at the top will inspire top-down organisational change within the army to move outside the paradigm of industrial era warfare.

Lt Gen Raju has been quite vocal against Pakistan, apparently trying to appease the political leadership of India (BJP). He has more of a counterinsurgency mindset as opposed to conventional warfighting. Without acquiring any experience as an Army Commander (of a geographic command), it is unsure how much his input would be valued by Pande. The latter would perhaps find his Principal Staff Officers more resourceful, particularly the DCOAS (Strategy). It is also worth noting in the near future how much influence and respect Raju will be able to exercise over the Army Commanders. His time in the Military Operations Directorate was divided equally between managing the standoff with China and anti-COVID measures. As the VCOAS is also nominated by the Appointments Committee of the Cabinet led by India’s Prime Minister, there exist reasons to speculate that Raju’s unexpected elevation to VCOAS was politically motivated; there were other suitable candidates with the requisite experience for this position. In fact, all Army Commanders (except GOC-in-Cs of Northern and Training Commands) are senior to Raju. This fact further reinforces how general officers can be given out-of-turn elevations if they figure prominently before the political leadership. Similar happened when late Gen Bipin Rawat was favoured by the BJP on multiple occasions.

Lt Gen Katiyar has maintained a rather low profile throughout his career. His war course from the US, alongside command of a strike corps, makes him a strong contender for further senior appointments within Army HQ. Following the pattern of Pande and Raju, who both had background service in the Military Operations Directorate prior to becoming VCOAS, Katiyar might succeed Raju. If he moves out as Army Commander, he would still have a chance to be considered for COAS. Broadly speaking, Katiyar’s grooming in the US could favour him in view of India’s status as a partner for America in the larger “Indo-Pacific” paradigm.