In the wake of America’s growing interest in the Indo-Pacific sphere, including the Western  Indian Ocean region, Pakistan faces continued maritime security threats from the Indian military establishment. The institution of a Chief of Defence Staff has mandated grouping of existing air, land, and sea forces into integrated theatre commands.

The future threat from Pakistan’s east, particularly the maritime domain, could involve a joint forces command operating from India’s western front. Just recently, the Indian Air Force (IAF) reactivated its dormant Number 222 Squadron (“Tiger Sharks”) at Thanjavur, Tamil Nadu for maritime attacks using Su-30MKIs. Media reports claim that the new base will keep tabs on PLA Navy movements in the Indian Ocean but there is no binding to prevent sorties along the western seaboard, if necessitated.

At present, apart from the Thanjavur base, the IAF has three bases to launch aerial attacks in aid of a future naval showdown with Pakistan in the Western Indian Ocean (Squadron Numbers 20 and 30 in Lohegaon and Number 15 in Bhuj). Similarly, along the western front, the Indian Navy has aviation assets at seven locations (Porbandar, Hansa, Kunjali, Shikra, Santa Cruz, Garuda and Kochi). Indian Navy already maintains three forward-operating bases in Lakshadweep (Minicoy, Androth and Bitra) and is speeding up development to further sustain offensives directed toward the North Arabian Sea.

While the legality of Chinese efforts in South China Sea is a subject of continuous dispute, the time is ripe for Pakistan to consider land reclamation on the extended continental shelf.

Persistent patronage for India’s assertiveness in the high seas by the US and the passivity of Indian Ocean littorals raises genuine concerns within Pakistan about the emergence of a maritime hegemon. It could disrupt, degrade and even destroy the salience of the country’s long-term economic prosperity which is linked directly to the success of China-Pakistan Economic Corridor (CPEC), a component of China’s Belt and Road Initiative (BRI). Gwadar port being the lifeline of the Maritime Silk Route directly links the Indian Ocean to the Central Asia hinterlands.

The completion of Magampura Mahinda Rajapaksa Port, otherwise known as Hambantota port project, if uninterrupted, could raise the costs for Indian naval adventurism. Realistically, it would be unwise for Pakistan’s leadership to place all its bets on the Rajapaksas’ ability to resist US and Indian pressure thus far.

In March 2015, the United Nations’ Commission on Limits of Continental Shelf approved Pakistan’s claim to add 50,000 square kilometres to its original offshore territory, thereby totalling 290,000 square kilometres. This extended continental shelf was acquired with the support of the Government of Oman and comprises an area directly at the centre of the waters connecting Oman and India. 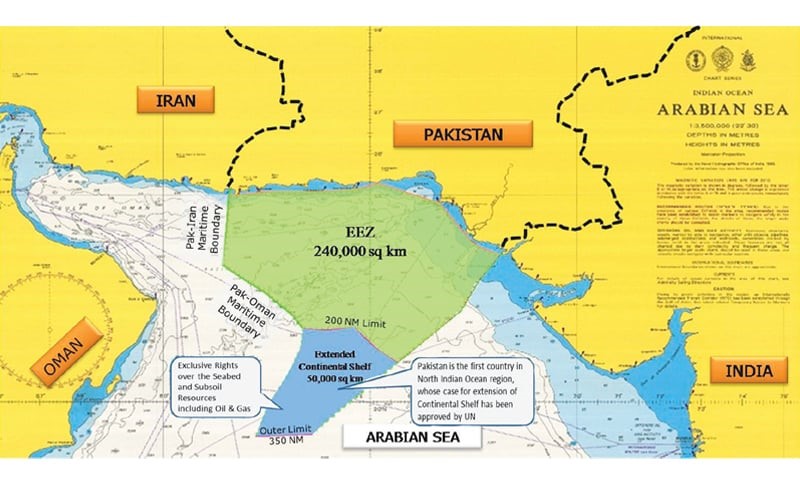 Land reclamation via construction of artificial islands has been a trending phenomenon, serving a variety of socio-economic purposes. In China’s case, seven artificial islands comprising the Spratly Group give PLA Navy the potential to control escalation dynamics in the South China Sea. According to the Asia Maritime Transparency Initiative, China also maintains 20 outposts on the Paracel Islands along with coast guard patrols in the Scarborough Shoal.

While the legality of Chinese efforts in South China Sea is a subject of continuous dispute, the time is ripe for Pakistan to consider land reclamation on the extended continental shelf.

Firstly, an artificially-formed archipelago would boost tourism while also enabling research in food security. Public-private partnership mechanisms can be developed to populate these islands through affordable housing for sea merchants on the one hand and high-end, commercial residential projects on the other, following the UAE’s lead. The overall objective must be to benefit from the untapped potential of a blue water economy and simultaneously increase counter-value targets to raise the costs of war for military aggressors.

Secondly, Pakistan Navy and especially its marines can gain an extended foothold in the Arabian Sea while also enabling coast guards to perform patrols during peacetime. Future scenarios could involve marine battalions using one of the artificial islands as a forward-operating base. Similar to PLA’s efforts, Pakistan could also build a runway strip for Pakistan Air Force aircraft and naval aviation assets to counterbalance India’s desired aerial dominance in the Western Indian Ocean. Naval intelligence can get increased visibility of Indian naval activities and communications.

The overall objective must be to benefit from the untapped potential of a blue water economy and simultaneously increase counter-value targets to raise the costs of war for military aggressors.

Pakistan’s all-weather strategic cooperative ally China has first-hand experience in land reclamation including necessary equipment to execute such monumental undertakings. The proposed benefits intersect national defence and economic security, proving immensely beneficial for Beijing’s own interests as well. Troops stationed at the PLA support base in nearby Djibouti could avail of an artificial Pakistani naval base in the extended continental shelf through re-fuelling and replenishment facilities.

Another important benefit which can be derived through these land reclamation efforts is that future PLA Navy berthing confined to the artificial Pakistani naval base in the extended continental shelf would remove misperceptions about Gwadar serving as a military base by the PLA Navy. These oft-revitalised assertions have unnecessarily securitised the purely economic salience of Gwadar and encouraged closer collaboration of India with Iran and Afghanistan via Chabahar.

India has strengthened its reach in the Eastern Indian Ocean through the naturally-formed Andaman and Nicobar Islands. On the Western Indian Ocean, it has no alternative except to forge geostrategic alliances with countries along East Africa and Oman through American patronage and strategic partnership with Japan.

This is the opportune moment for Pakistan to look 25 years ahead and plan accordingly.