Unlike previous tests of Land Attack Cruise Missiles (LACMs), this variant was an Anti-Ship Cruise Missile (ASCM); it was tested from INS Vishakapatnam, the first of four Vishakapatnam-class stealth guided missile destroyers being built through a joint Indo-Russian collaboration (Project 15-B) that was commissioned as recently as November 2021. India’s Defence Minister Rajnath Singh termed the ship as a ‘symbol’ of the country’s “growing maritime power”.

India’s interest in stealth destroyers began with the construction of Kolkata-class ships under Project-15A at Mazagon Dock Shipbuilders Limited (MDSL) in Mumbai from late 2003. Considerable delays were faced due to slow pace of indigenous construction, foreign contractor delays and also late delivery of the Barak 8 missiles.

In contrast, Project-15B at MDSL is proceeding smoothly. These destroyers have enhanced stealth characteristics and advanced weaponry including the Barak 8 Surface-to-Air Missile (SAM) and LACM/ ASCM variants of BrahMos. Other equipment includes a 127mm main gun and AK-603 Close-In Weapons System. Approximately 75 percent of the components in the project are indigenously manufactured.

With the recent test from INS Vishakapatnam, all stealth guided missile destroyers in active service with the Indian Navy are not only operating under the Western Naval Command (WNC) i.e. oriented toward Pakistan, but have also executed test-firing of BrahMos missiles at least once.

The first test of BrahMos ASCM was conducted in 2003, but this and subsequent ones were fired from destroyers that did not possess stealth characteristics. The test-firing from INS Vishakapatnam thus constitutes a milestone. Shortly before this test, the Indian Navy had moved a proposal to procure 38 extended range missiles for fitting onboard Vishakapatnam-class destroyers as the “main strike weapon”; they are already installed onboard other ships.

INS Kochi has the distinction, thus far, of conducting test-fires of BrahMos missiles on two different occasions. In fact, the first test from INS Kochi occurred just two months after its commissioning. With the recent test from INS Vishakapatnam, all stealth guided missile destroyers in active service with the Indian Navy are not only operating under the Western Naval Command (WNC) i.e. oriented toward Pakistan, but have also executed test-firing of BrahMos missiles at least once.

*based on open source data held by the author

Indian media reported that sea trials of the second Vishakapatnam-class destroyer, INS Mormugao, commenced from December 2021 or just over six and half years of keel-laying; this is a further half-year earlier than the over 7 years taken for INS Vishakapatnam to reach sea trials.

On an overall, the overall process of keel-laying to active commissioning of Project-15B vessels has been fast-tracked by two years.

Observers at PAK-IMINT analysed open source satellite imagery from MDSL. In November 2021, the INS Imphal replaced INS Mormugao in the closed dock for outfitting, as the latter was sent for sea trials in mid December 2021. Meanwhile, INS Surat is still in the dry dock undergoing final stages of construction before being launched.

With the testing and subsequent onboard fitting of BrahMos, India’s stealth guided missile destroyers enjoy a standoff capability that would enable them to easily take-out Karachi, Hyderabad and Ormara from waters off Gujarat. 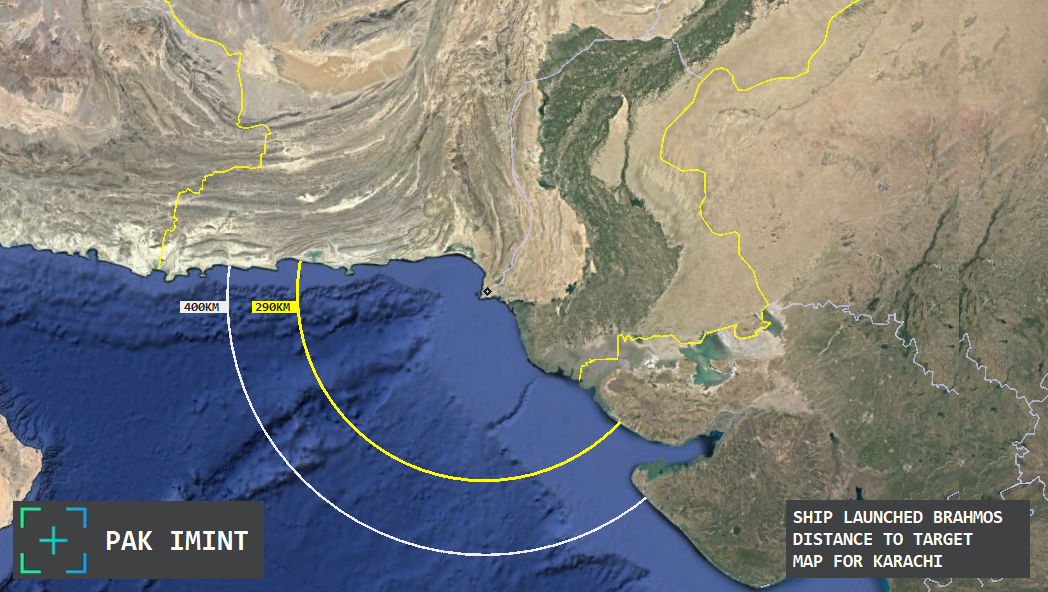 The extended range BrahMos missile enables even greater targeting in Balochistan, and may even be able to reach Gwadar if fired from the high seas.

Several under-construction vessels in Mumbai have experienced accidents over the past years, leading to further delays. In the specific context of stealth guided missile destroyers, the delivery of INS Kolkata experienced a gas leakage incident that killed a Commander (2014) while the INS Vishakapatnam experienced a fire outage (2019).

The uninterrupted fast-track construction of Project-15B vessels, despite the onslaught of COVID-19 and global disruption of supply chains, is rather unusual and speaks volumes about the Indian security establishment’s determination to enhance the potency of its navy’s surface warfare fleet. Perhaps the Indian Navy’s ambition to maintain three Carrier Battle Groups (CBGs) will not remain a distant dream, particularly keeping in view the plans to establish a unified Maritime Theatre Command.

If INS Surat is launched in 2022, Project-15B could be wrapped up by 2028; around this time, Pakistan will be indigenously constructing Chinese-origin Hangor submarines in Karachi. Pakistan Navy’s Vision 2030 will need to be mindful of a CBG in the Western Indian Ocean being activated earlier than forecast.