Geopolitical Contestation and Attacks on Chinese Nationals in Pakistan

The year 2022 seems heavy for Pakistan as political instability continues after Imran Khan’s outstation, the economy dwindles, and terrorist attacks by ethno-nationalist groups again target Chinese nationals. The recent episode at the Karachi University has unfolded new tactics of terrorists and raised many questions over the security situation within the country during this precarious political scenario. The suicide attack carried out by a Baloch woman is itself a new phenomenon. Firstly, it raises questions about the security measures all over Pakistan, particularly for the Chinese. Secondly, it signifies that the ethno-nationalists are trying to enter urban spaces for their heinous agendas. Their confidence is attributed to the degree of support gained from the anti-Pakistan forces, which must be checked. The least developed province of Pakistan, Balochistan, has seen many insurgencies against the state. But, after Chinese engagement in CPEC and separatists’ attacks on the Chinese nationals in Pakistan, there are serious doubts over the motivation and cause of the responsible groups. It seems from the recent attacks and videos circulating on social media by the Majeed brigade of Balochistan Liberation Army (BLA) that their agenda is to keep Balochistan under the tribal and ethnic grip. They want to stop their region from becoming a linchpin of geoeconomics. The Pakistani state has to be vigilant to bring them in front of the public and counter their narrative that is falsely based on the representation of common Baloch. There has been an increase, since 2001, in the number of attacks on Chinese people in Pakistan. It indicates that there are loopholes in the security domain for the Chinese nationals in the country that should be addressed. 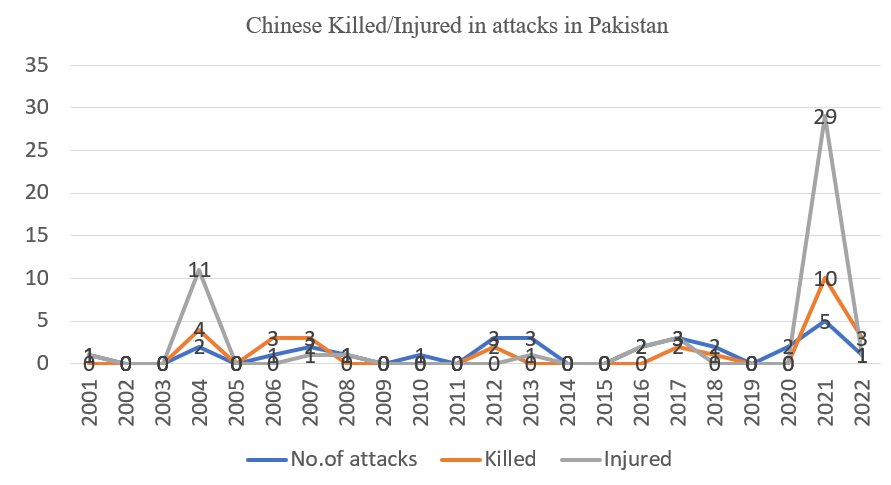 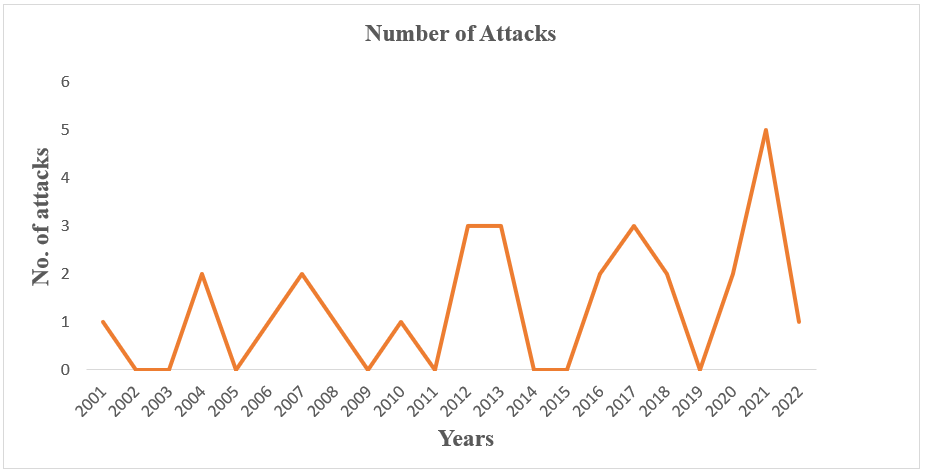 The graph in figure 2 further shows an incline in the number of attacks in 2011-2012, and the situation has been gradually worsening. A peak in attacks was witnessed from 2015-2017, and then again in 2020, which reflects the trend is increasing. So, there is a need for improving security measures.

The hike in attacks on the Chinese entails geopolitical forces like India’s animosity to keep China out of South Asia after engagement in CPEC. This is the time to overhaul the policy and approach to Chinese people’s security in Pakistan to stop antagonistic forces. Chinese nationals are engaged in different development projects in Punjab, including CPEC. They are exposed to the malicious designs of Hostile Intelligence Agencies (HIAs) and militant organisations.

Balochistan’s terrorist organisations were active in the border regions of Punjab and Balochistan, but the recent attack indicates that they operate in the main cities as well.

The analysis of threats received from time to time against the Chinese nationals reveals that Research & Analysis Wing (RAW) does not look upon these developmental projects with good intent. Similarly, terrorist organisations intend to thwart the developmental projects run by the Chinese in Pakistan. Daish, in a bid to attract attention and increase its rating amongst terrorist organisations, also has a likelihood to engage in such misadventures. Balochistan’s terrorist organisations were active in the border regions of Punjab and Balochistan, but the recent attack indicates that they operate in the main cities as well. Their presence and malicious intent are clearly known. These militant organisations are most likely to resort to the targeted killing of Chinese nationals.

After overhauling the existing framework for Chinese security, the following points could be considered with regards to better security of Chinese nationals working in Pakistan

A decline in terrorist attacks in general and on Chinese people, in particular, has to be ensured. The existing trend has the ability to sabotage the essence of Pak-China friendship, which would be against the national interest of Pakistan. So, it could be said that the security of Chinese workers/people in the country is synonymous with securing one of Pakistan’s major national interests. Moreover, there is a dire need to engage the Baloch people at all levels to pave the way for Chinese investment. Otherwise, the “foreign occupation like East India Company” narrative of Baloch separatists will attract the general Baloch masses.

Tauseef Javed works at the Centre for Strategic and Contemporary Research (CSCR) as a Research Associate. He is currently enrolled as a doctoral student at Fujian Normal University in Fuzhou, China. His research focuses on international relations, history, and area studies from an interdisciplinary perspective.