In March 2021, the Indian Navy’s Directorate of Network Centric Operations (DNCO) issued a tender for Space-based Automatic Dependent Surveillance-Broadcast (ADS-B) feeds. ADS-B is an air surveillance technology that provides information regarding the position, level, and intent of various flights in near-real-time. This data is broadcast every half-second from aircraft for unique identification.

While traditional ADS-B methods rely on ground-based receivers alone, a revolutionary method of acquiring information from satellites in Low-Earth Orbit (LEO) can receive more precise and secure ADS-B inputs for onward relays to the consumer.

Specifics gleaned from the tender indicate that Space-based ADS-B is required for a minimum period of two years for use by the Information Management and Analysis Centre (IMAC), Gurugram. The IMAC is a nodal centre of India’s National Command Control Communication and Intelligence System (NC3I) that was set up to link 51 operational centres and lower echelons of Indian Navy and Indian Coast Guard across both seaboards and island territories. IMAC fuses data received from coastal radars, white-shipping agreements, Automatic Identification Systems (AIS) transponders on merchant ships, air traffic and global shipping databases. It is reportedly in the process to transform into a National Maritime Domain Awareness (NDMA) centre.

The tender highlights that the Area of Interest for Space-based ADS-B is bound by coordinates 17°N 059°E, 25°N 069°E, 17°N 069°E. This region essentially covers the entire central stretch of the Arabian Sea: about 316 km southeast of Duqm (Oman), the Badin area of Sindh (Pakistan) in the north and almost 467 km southwest of Mumbai (India). The combined coverage area is approximately 473,362 sq. km. 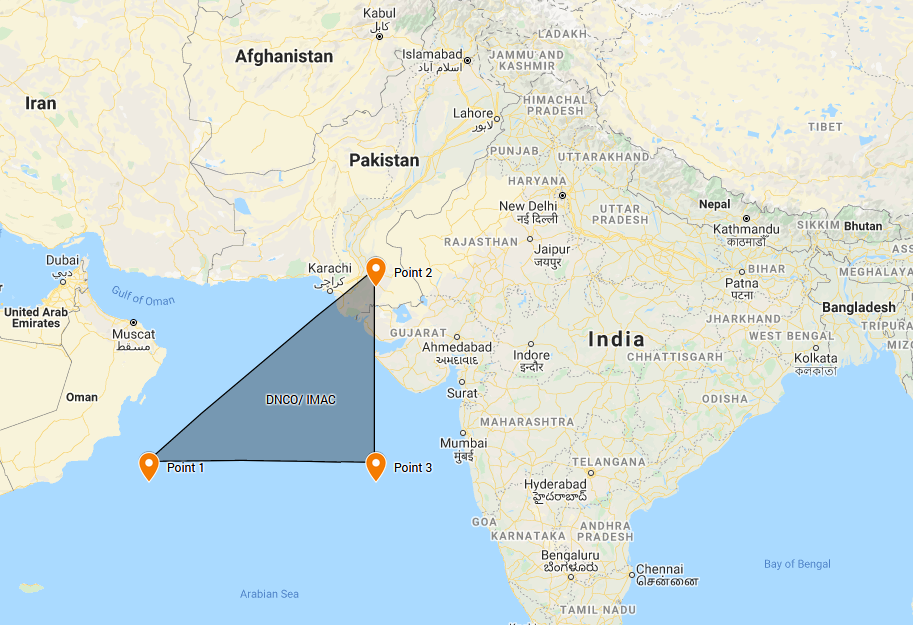 Plotting by the author based on coordinates mentioned in the tender

The vendor will have to provide an updated air traffic data feed after every five minutes by fusing space-based input with data from ground stations so that informational parameters such as Origin, Destination, Flight Plans, Position, Speed, Altitude and Course etc could be ascertained and subsequently verified. Moreover, the vendor will be responsible for the training of approximately 10 personnel within three months of the contract commencement.

The DNCO tender mentions that space-based input would be obtained from a “fully deployed operational global infrastructure consisting of a constellation of Low Earth Orbit (LEO) satellites and associated secure ground systems”. While the Indian Navy has been using a dedicated geostationary naval satellite GSAT-7 (“Rukmini“) since 2013, it has yet to be augmented by a new GSAT-7R, projected to be functional by 2022. There is no public information about Indian Armed Forces or associated security agencies using data obtained from LEO satellites.

The strongly assumed vendor in this regard is the Aireon, hosted on Iridium LEO satellite constellation comprising of 66 satellites. In July 2019, the Airports Authority of India (AAI) became the first Air Navigation Service Provider in South Asia to use Space-based ADS-B after signing a contract with Aireon. This enabled enhanced air traffic coverage of oceanic airspace within the Arabian Sea, Bay of Bengal and the Indian Ocean covering almost six million kilometres. 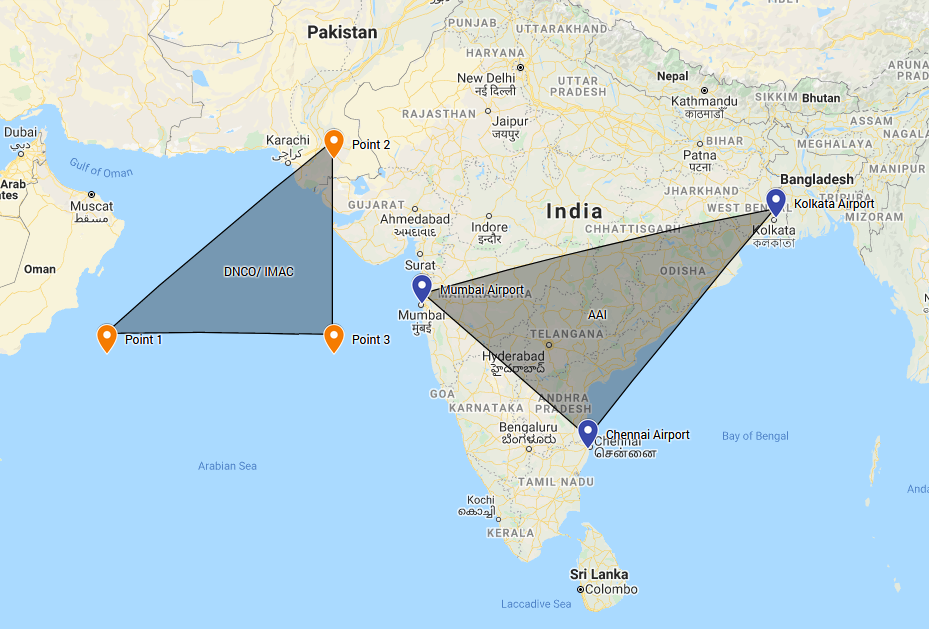 Plotting by the author based on coordinates in the tender and airport locations, for comparison

The Bay Of Bengal Arabian Sea Indian Ocean Safety Monitoring Agency (BOBASMA) which operates under AAI was set up to monitor international oceanic airspace and perform safety assessments. It is accredited by the International Civil Aviation Organisation (ICAO). In 2017, BOBASMA assessed that Large Height Deviation (LHD) reports filed by Indian air traffic controllers since 2013 indicated that Category-E LHDs between Mumbai Flight Information Region (FIR) and further FIRs to its west constituted “significant” safety risks for Reduced Vertical Separation Minimum (RVSM) operations in the Bay Of Bengal Arabian Sea Indian Ocean (BOBASIO) airspace. It pointed out that the oceanic airspace of Mumbai FIR accounted for the “maximum number” of long-duration LHDs. Per a previous estimate, only 60% of aircraft using Arabian Sea airspace were equipped with ADS-C/CPDLC. The report recommended that carriage of ADS-B and ADS-C/CPDLC by aircraft could help mitigate risks while Satellite-based ADS-B could help remove the gaps in traditional oceanic air surveillance.

Aireon boasts the ability to track more than 11,000 global aircraft in real-time. Such a capability would significantly boost the Indian Navy’s air traffic surveillance missions.

In this context, it would appear reasonable for the Indian Navy to acquire direct visibility of Space-based ADS-B independent of the AAI, as also the peculiar focus on the Arabian Sea. However, it must be borne in mind that military aircraft are usually exempt from ADS-B broadcasts (if they wish to be unobserved), instead of relying on geographical filters enabling visibility only to the host country near arrival.

Aireon boasts the ability to track more than 11,000 global aircraft in real-time. Such a capability would significantly boost the Indian Navy’s air traffic surveillance missions. It has been observed that at any given point in time, two Iridium LEO satellites are covering the Arabian Sea.

In his recent academic dissertation, Indian Navy Captain R Rajesh mentioned the advantages and disadvantages of employing LEO satellites for Maritime Domain Awareness (MDA). Some of the advantages include:

Conversely, Rajesh pointed out that there are also several disadvantages, including the need for deploying a complete LEO constellation. For the Indian Navy, the hassle is removed when commercial vendors are used for service provision. He concludes, however, that LEO satellites can prove as a “very viable alternative” to GEO satellites for the Indian Navy’s satellite-based MDA.

While it remains speculative that Aireon/Iridium Communications would be selected as the vendor for Satellite-based ADS-B, it fits the bill perfectly. Unsurprisingly, it points toward special technology access for the Indian Armed Forces by a US-origin and US-based company. In the long run, enhanced Indian MDA under the so-called “Indo-Pacific” paradigm benefits the US’ own regional interests.