The INAS 316 is the second Indian Navy aviation squadron to have a dedicated fleet of Boeing P-8I Neptune Maritime Patrol Aircraft (MPA), strategically located in the centre of India’s western seaboard. The first P-8I fleet of eight MPAs was inducted into and operating under INAS 312 (“Albatross”) in the southeastern seaboard overlooking the Bay of Bengal and Gulf of Mannar from Tamil Nadu.

Mainstream media reports shared important excerpts from Hari Kumar’s address, especially the reiteration that India intends to be the “preferred security partner” in the Indian Ocean Region (IOR), an extension of its self-proclaimed “net-security provider” status.

In his televised address, the Admiral disclosed that eight Boeing P-8Is that were previously inducted “continue to provide surveillance for joint service missions,” and their combined operational footprint extends “from Malacca, Lombok and Sunda Straits in the east to the southwest Indian Ocean, Gulf of Aden and the Persian Gulf in the west”. While it is true that these MPAs were involved in monitoring the People’s Liberation Army (PLA) movement in the Line of Actual Control (LAC) during the 2017 Doklam crisis (acknowledged by Hari Kumar), they were also called in to conduct widespread reconnaissance over the Arabian Sea during the 2019 standoff with Pakistan on Balakot. Thus, these aircraft have been operationally tested in a near-real conflict scenario with Pakistan.

With the completion of a base in Agaléga, which would help remove the blind spot in the southwestern Indian Ocean, the Indian Navy has basically (and rather ironically) formed its own “reverse string of pearls” concept.

The predecessor frontline air squadron of P-8Is maintained by INAS 312 (“Albatross”) was raised in the eastern seaboard but under Southern Naval Command (SNC), strategically positioned to keep tabs on both the Bay of Bengal and Gulf of Mannar while reducing flight time to Andaman & Nicobar Islands; they provide an operational advantage to keep tabs on the PLA Navy vessels during entry from the Pacific. INAS 316, on the other hand, has been raised at Western Naval Command (WNC), which is primarily Pakistan-focused.

If keeping an eye on the broader Western Indian Ocean is the stated objective, it would have been prudent for the Indian Navy to raise INAS 316 at, for example, INS Garuda in Kerala (also under SNC) or on one of the islands in the Lakshadweep. Since Pakistan directly shares both land and maritime borders with India, setting up base in INS Hansa only confirms that the Indian Navy perceives potent maritime threats from a less-equipped Pakistan Navy.

Some would argue that a base in Goa would expend less time and resources to keep tabs on PLA Navy movements in the Arabian Sea, particularly concerns among Indian policymakers that China might establish a “military base” for PLA Navy in Gwadar. This rationale carries little weight since PLA Navy can be monitored and, if necessary, restricted from movements to and from the Indian Ocean via the Pacific Ocean.

In his detailed analysis, Samuel Bashfield examined the undeclared construction of an Indian Navy base in North Agaléga island (part of Mauritius). He notes:

“The most important new infrastructure on the atoll is a 3,000-metre runway, and considerable apron for aircraft. Under construction also are sizable jetty facilities in deeper water, and what looks like barracks and fields which could be used by military personnel.”

“The outpost at Agaléga will be useful to support the operation of India’s fleet of Boeing P-8I maritime surveillance aircraft.”

“The vastness of the Indian Ocean means that P-8s and other maritime surveillance aircraft require airfields and refuelling facilities at staging points, which is where facilities like those on North Agaléga island come in.”

Until this facility is completed, the Indian Navy could also benefit from base facilities in the Diego Garcia, a UK-controlled territory in the Indian Ocean which hosts a sizable base for US Navy’s 7th Fleet (US Indo Pacific Command). In April 2019, around the time Pakistan and India were engaged in a military standoff, the Indian Navy’s P-8Is from INAS 312 participated in “cooperative activities” with their American counterparts focused on Anti-Submarine Warfare (ASW) training, information sharing, and coordination between naval assets which included MPAs. A pilot from 7th Fleet’s Patrol Squadron 8 stated the goal of these activities was “to further standardise our procedures so we can work more efficiently in future real world operations”. Then VP-8 Commanding Officer added further that the engagement would help in “laying the groundwork for future integration efforts between our Maritime Patrol and Reconnaissance Forces”.

The Indian Navy has already signed or renewed agreements for logistics and replenishment facilities in Duqm (Oman) and with Japan, the latter leading to options for the use of Japan Self-Defence Force Base in Ambouli (Djibouti). With the completion of a base in Agaléga, which would help remove the blind spot in the southwestern Indian Ocean, the Indian Navy has basically (and rather ironically) formed its own “reverse string of pearls” concept. Members of the Quad and even France would gladly support efforts to place greater reliance on India’s eyes and ears on the Indian Ocean rather than spending billions to do the same. 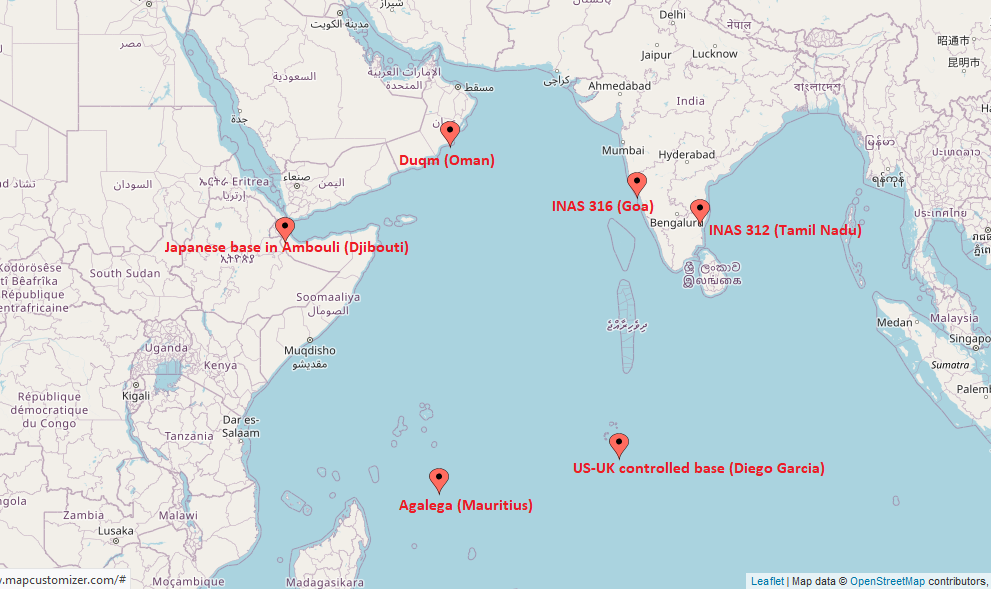 With the induction of six more P-8Is (a total of 12 in-service, four pending) in the coming decade, the Indian Navy is on the path to achieving unparalleled regional maritime information dominance. Moving forward, Pakistan might seek Chinese assistance to bolster its reconnaissance limitations in the interests of larger shared security concerns viz China Pakistan Economic Corridor (CPEC).

Pakistan Navy’s doctrine and Vision 2030 (released in 2018) do not indicate interest in looking beyond the North Arabian Sea or acquiring high-end MPA but rather the reliance on refurbished commercial jets. The Naval Air Arm vision (2017) is similarly myopic and indicates intent to focus on coastal surveillance within immediate waters. Detecting hostile movements at greater distances in the maritime domain is perhaps not a strategic priority.

Till the time of writing this report, India remains the only Asian country to operate P-8Is (South Korea has placed orders for the P-8As and is waiting for deliveries). This gives a further edge to India in terms of interoperability with partner countries. Excepting Japan, all Quad members possess variants of the P-8 Poseidon.

While India cannot reasonably expect Pakistan to launch an offensive in view of considerable force disparity, the latter’s defensive manoeuvres would remain susceptible to P-8Is, eventually leading to a high likelihood of combat disadvantage. Pakistan Navy’s policymakers would need to reconsider their strategic myopia. For starters, the Western Indian Ocean in its entirety should be considered an important area for active patrolling in the larger interests of pre-empting hostile intent. To do this requires a massive doctrinal rethink in consultation with the political government and logistics exchange agreements with friendly countries.

More importantly, the decision to rely on refurbished jetliners should be changed from being “a substitute” to being “a temporary solution” pending the acquisition of high-end MPAs from overseas.

The author is an Intelligence Analyst, Trainer and Consultant with management-level experience in Pakistan's national security sector. He writes for CSCR as an External Contributor and can be reached on Twitter: @misterzedpk