The global trend of Vehicle Borne Terrorism (VBT) is mainly fuelled by religious affiliations and revenge motivations. Ever since the resurgence of the global Vehicle Borne Attacks (VBA), terrorism has become easier, cheaper and cost effective. Terrorists carry out simple attacks by cutting down passengers, while driving onto them. In the last two decades, VBT had emerged as a new face of terrorism. Terrorists have changed significantly their modus operandi, from the past strategy of targeting financial centres towards the latest strategy, the cutting down of pedestrians.

For several years, terrorist organizations like Al-Qaeda and Daesh had frequently urged their followers via Twitter, Facebook, and other social media outlets, to carry out simple attacks by using cars and trucks as weapon. It was 2010, when Al-Qaeda’s Yemeni Branch repeatedly encouraged its affiliates around the world to use ‘truck’ as weapon.

Likewise, in 2014 ISIS called for lone wolf attacks, by using spontaneous weaponry to kill westerners, whom they call infidels. ‘If you are not able to find an IED or a bullet, then single out the disbelieving…Smash his head with a rock or slaughter him with a knife or run him over with your car or throw him down from a high place or choke him or poison him,’ said ISIS Spokesman Abu Mohammad al-Adnani.

Vehicle Borne Attack (VBA) is the simple way to carry out attacks, by using ‘car’ or ‘truck’ as weapon. It does not require any special skill, technique, finances and communications.

From 2006 to 2017, out of 12 VBAs, 07 were the outcome of religious motivations, 04 to take revenge, and the reasons behind the remaining attacks are not yet public. 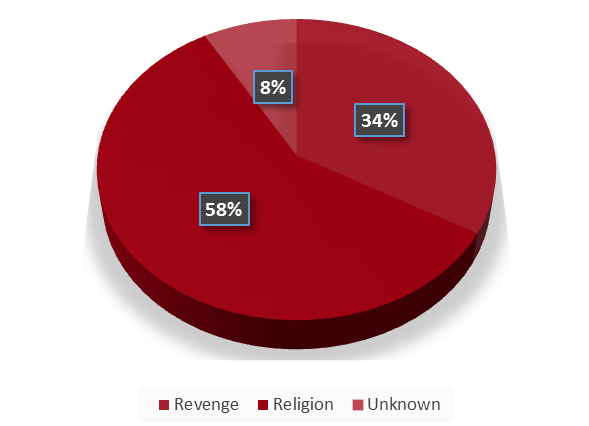 Terrorists portray ‘violence first’ as the divine act, executed in response to some theological imperative. It is noted that out of 12 VBAs, 07 were religiously motivated. The counter narrative strategy, which includes the use of images, texts, and videos to highlight the similarities and differences between different religions, cultures, ethnic groups, living within the country or across is vital to discredit the terrorists’ theological and divine rhetoric. Likewise, the use of religious textbooks, discourse of religious leaders and former Jihadists, to refute and dismantle violent religious and ideological claims is vital.

Sometimes it takes more than religious fanaticism. Revenge as a response to injustice has a long history. Right or wrong? Tit for tat has always been the basic principle of human scale. Whether it is Caesar crucifying pirates or the US invading Iraq, the emotional spectrum of revenge has been the same. Hard counter-terrorism appears as frightening. The psychological impacts of hard pursuits are many times proven as worse. The essay finds that 04 out of 12 attackers were motivated to take revenge for the bloodshed of their fellows who were killed in Iraq, Palestine, UK or elsewhere. The hard pursuits always produce grievances, provokes frustration and aggression, which leads to violence. So, states should ensure viable measures such as: speedy justice for all, banning hate speeches and mocking of a particular group or community. States should remain careful to the use of brute force, which can provoke revenge motivated terrorism.

Measure the vehicle, size, mass, speed, type and the driving behaviour by installing essentially designed sensors and cameras, in secret places at highways and roads, to get pre-emptive alerts, to prevent attack.

The record keeping of when, how and what type of vehicles frequently or otherwise visit the specific public places as: parks, beaches, clubs, cinemas, and other entertainment outlets can help security officials to assess the bad guy, bad vehicle and bad time, before he can conduct an attack.

Ban the entry of vehicles up to 100 meters or lesser from the public places as: beaches, cinemas, parks, clubs, and entertainment houses.

Use of portable barriers, which does not require digging, trenching, or any other underground worries is vital to be placed outside government, semi-government and private institutions that are particularly vulnerable to attack.

Install vehicle control devices to ensure the deactivation of bad vehicle to prevent the attack and also, to minimize damage or death toll during attack.

The VBT is difficult but not impossible to prevent. The essay finds that the maximum number of attacks being carried out, were either the outcome of religious affiliations or were a result of the motivation to take revenge. Therefore, it is vital to avoid the use of hard pursuits, which otherwise can provoke frustration and violence. Also, the use of counter narrative strategy is indispensable to refute extremist narratives.