In late September, North Korea launched six rounds of ballistic missiles. It fired an intermediate-range ballistic missile at Japan, launched off from the northeast coast and fell into the Pacific Ocean. It is the first time since 2017 that North Korea has shot a ballistic missile at Japan. According to officials, it launched from the Korean border with China and remained in the air for about 22 minutes before it fell into the Pacific Ocean. The North Korean missile came after the United States and South Korea wrapped up two days of naval drills off the Korean Peninsula’s east coast. It raises the question of why North Korea suddenly increased its missile tests and what message Pyongyang wants to send.

In response to the North Korean missile test, South Korea and the US conducted military drills over the east coast of the Korean peninsula. After a missile test, Japan alerted its citizens for safe shelter. South Korea and Japan both have condemned the military escalation of North Korea and have said that it poses a severe threat to regional security and stability. Japan’s Prime Minister, Fumio Kishida, has stated that this ballistic missile launch by North Korea was an outrageous act and impermissible and that they will respond as soon as possible with the utmost vigilance. The United States also fully condemned North Korea’s missile launch over Japan, described as a “long-range ballistic missile.”

Kim had guided nuclear tactical exercises directed at South Korea for a couple of weeks in protest over the recent US-South Korea joint naval drills involving an aircraft carrier.

North Korea has faced dozens of international sanctions since 2006 for nuclear activities. World leaders have put North Korea under economic and financial pressure for more than a decade to destroy its nuclear arsenal. Both US and United Nations sanctions are primarily imposed on North Korea because of North Korea’s nuclear weapons programme. The North’s continuous missile testing prompted the South to impose its first unilateral sanctions on the North in 2017. According to the South Korean Foreign Ministry’s news release, the sanctions focus on 15 individuals who “contributed to bringing supplies related to funding North Korea’s weapons of mass destruction and missile development”. 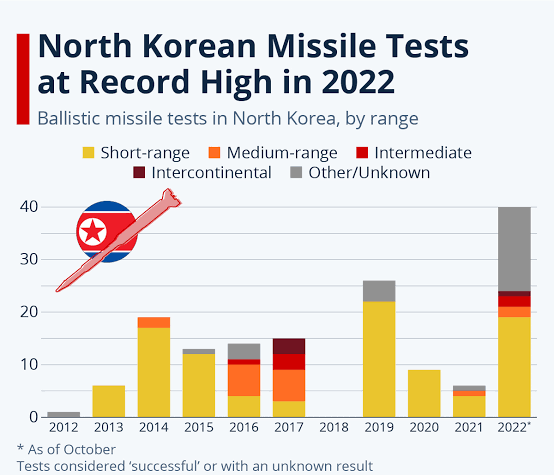 The missile tests intensified this year. The number of missile tests conducted in 2019 surpassed those conducted in 2017 as North Korea’s assertion that its missiles might reach the United States sparked a diplomatic crisis. According to reports, North Korea conducted more nuclear tests from 2018 to 2021. There have been no intermediate or intercontinental missiles since 2017, but those have been launched this year. Two summits between North Korean leader Kim Jong-un and US President Donald Trump in 2018 and early 2019 halted the tests. Still, they ultimately produced no tangible outcomes as animosity between the two countries swiftly heated up again.

Joint large-scale military drills between the United States and South Korea have been revived. These exercises had been scaled back in recent years due to diplomatic efforts to engage with North Korea and also because of the coronavirus outbreak. But, to alert Japan of Pyongyang’s use of a record number of missiles earlier this year, South Korean President Yoon Suk-yeol has called for more joint exercises. The tests were conducted after failed attempts to persuade Kim Jong-un to stop developing nuclear weapons and missiles. Besides, the US and North Korea were preparing for the drills when the nuclear-powered USS Ronald Reagan reached the port of Busan. The arrival of the USS Ronald Reagan resulted from efforts to increase the presence of US nuclear-capable assets in the region to deter North Korea. The South Korean navy stated that the goal of its joint training exercises with the US is to demonstrate military readiness and the firm resolve of the South Korea-US alliance to maintain peace and stability on the Korean peninsula. Although the US and South Korea claim the military exercises are defensive, North Korea perceives them as invasion preparation. Thus, Pyongyang frequently takes advantage of the opportunity to showcase its weapons and issue further threats.

A Warning to South Korea And the US

North Korea has said its recent bombardment of missile launches were “tactical nuclear drills” that leader Kim Jong-un personally oversaw. They were labelled as a response to the joint United States-South Korea naval exercises. Kim Jong said it was a clear warning to its enemies. Kim had guided nuclear tactical exercises directed at South Korea for a couple of weeks in protest over the recent US-South Korea joint naval drills involving an aircraft carrier.

The world is facing multiple threats of nuclear war. On the one hand, it is the Russia-Ukraine war, and on the other hand, its Pyongyang’s back-to-back missile tests. Kim has stated that the tests are being conducted to prepare for a nuclear war with their adversaries. Last month, North Korea revised its nuclear laws, and Kim declared it an irreversible nuclear power. A nuclear test has previously been conducted by North Korea after a series of ballistic missile launches. As the militaries of South Korea and the United States continue their joint military drills, some observers believe North Korea may continue its current testing spree, undertake its first nuclear test in five years, or launch other provocations near the western sea border or anywhere else. Clearly, North Korea will not stop; they will keep doing more advanced nuclear tests.