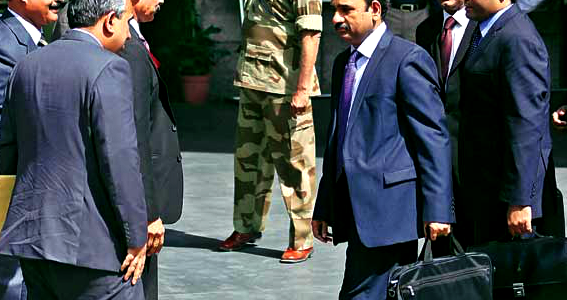 According to Indian media, five attackers are believed to have infiltrated into India from Bamiyal, 35 km from Pathankot. The handlers from Pakistan arranged a cab for the attackers in Pathankot using a Pakistani mobile number. The driver of the cab was killed by the attacker.

1st January 2016 [Friday]
As the cab break down, the attackers commandeer the SUV of the SP of Punjab Police Salwinder Singh and his associates in his official vehicle. The SP was travelling along with his friend and cook at Gulpur Simbli.

After thrashing the SP and his associates, the attackers first threw SP a few kilometers away. Later they threw another person near Pathankot while slitting the throat of the third man. The third man, pretending to be dead, was dropped out of the vehicle near Damtal hills on the Punjab-Himachal border (just 15 kilometres from Pakistan border). The SUV was later found abandoned at Tajpur, near the airbase.

Following the incident, a combing operation was launched in border areas of Pathankot and Gurdaspur districts. After a series of meetings of Indian NSA with Indian Army Chief Dalbir Singh and top IB officials, a team of 160 National Security Guard (NSG) commanders were rushed to Pathankot air base from NSG’s base at Manesar, outskirts of Delhi in the anticipation of a likely attack. In addition, an army detachment was also positioned at the air base to avert any likely attack.