Recent attacks in Balochistan have not been astonishing only in the extemporised nature of their occurrence but more so in a manner in which they could mobilise disinformation, propaganda and fake news on social media platforms – primarily Twitter. Balochistan has been at the centre of narrative battles for decades, and with the help of modern communication technology, it has further moved towards the very core of disputed discourses.

Given the historical standards, the case of Balochistan has often been proliferated and perceived by a wide spectrum. Therefore, it is only natural to encounter a multitude of narratives that are currently being associated with the overall debate. Each is attempting to establish its version of the truth. However, with the advent of the latest social media platforms, the burden of establishing truth has been adopted by a variety of non-state actors. Virtual space has been able to make room for all kinds of opinions, and the sheer pace of developments that unfold in that realm is the true reason of concern for all responsible actors. 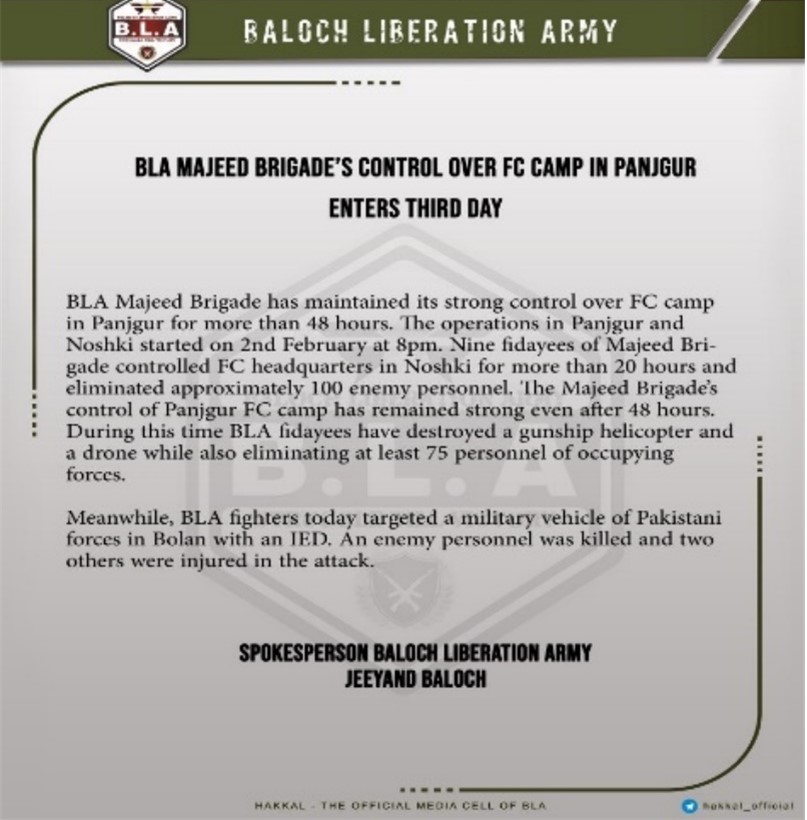 Recent terrorist attacks on Frontier Corps’ (FC) camps in Panjgur and Noshki district that resulted in the death of 20 militants and martyring 9 FC personnel once again leashed propaganda campaigns all across Twitter. Majeed Brigade of Baloch Liberation Army (BLA) took responsibility for attacks right after they were reported. An extensive press release by BLA’s spokesperson Jeeyad Baloch, in national and international languages (assuming that they wanted to cater to both Pakistani and international audiences) was in itself a competition of contradicting realities and laden with fake news. It made tall claims like – confrontation in Noshki lasted for 20 hours, killing 100 enemy personnel and the one in Panjgur lasted for 48 hours, killing 75 enemy personnel (see figure 1).

In recent years, trends on Twitter have been a significant reflection or indication of a nation’s inclination towards a particular narrative. Indian obsession with inciting disinformation, exploiting Pakistan’s security situations, and capitalising on the existing or emerging fault lines is a source of vital concern.

However, ISPR and Pakistan’s Ministry of Interior dismissed these claims, setting the record straight with official stats. Still, regardless of their presentation of the factual state of affairs, Twitter was rife with fake news. Certain Twitter accounts (see figure 2) were rather prominent in disseminating unverified information and rallying specific Twitter trends for apparently political or otherwise reasons. Attention-grabbing trends such as #BalochistanIsNotPakistan, #BalochistanSolidarityDay, and #FreeBalochistan became a part of mainstream Twitter space during and after the attacks. While most of these problematic trends were being mobilised by apparently independent research accounts or obvious Indian social activists, their impact on setting a particular discourse was considerably note-worthy. 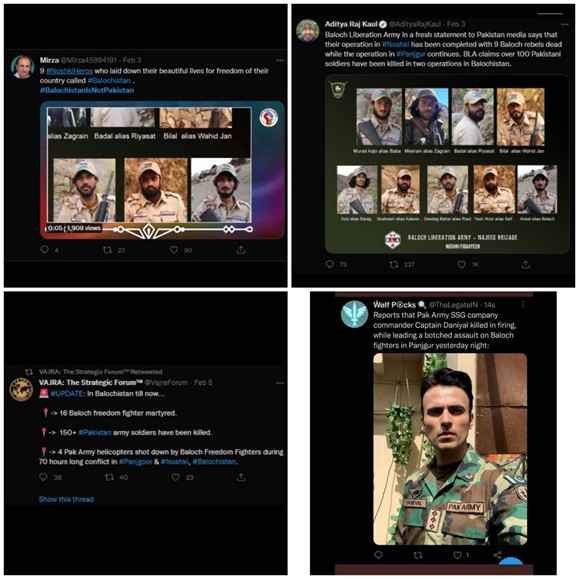 Aditya Raj Kaul’s Twitter account (@AdityaRajKaul) was at the forefront of reporting developments during both attacks, and while he only tweeted or retweeted most of the information, that was rather casually being spread on social media. His claims were influential in promulgating misinformation since they came from a position of seemingly journalistic authority. Tweets such as those contradicting ISPR’s official statements, in terms of the number of causalities and exploits of operation, were exceedingly misleading (see Figure 3). Meanwhile, despite some news agencies fact-checking analysis of fake videos and pictures that were circulated by BLA – Mr Kaul still kept treading on similar lines. Without acknowledging misreporting of information and taking responsibility for tweets that were ambiguous or fallacious to his 354.6k followers, he simply let them be. 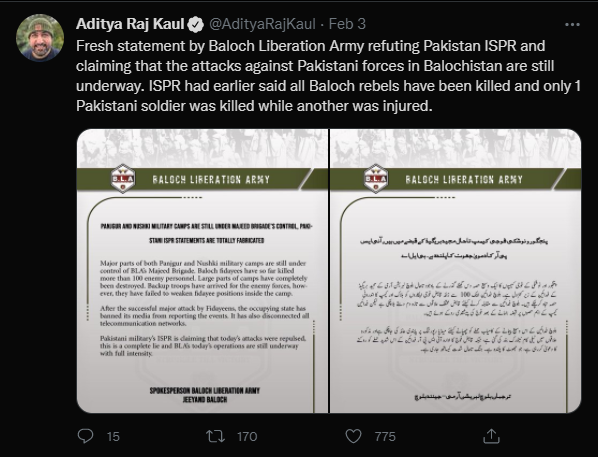 Amongst other prominent Twitter accounts that were significant in promoting fake news and thus false narratives were: Ŵølf PⒶcks (@TheLegateIN), VAJRA: The Strategic Forum™ (@VajraForum), Mirza (@Mirza45994191) and Sarhad Ke Paar (@Par1Ke)*. All these accounts seemed to be operating in close coordination with each other. For, they were retweeting each other’s content and forwarding sham trends, knowing fully well that BLA is not just another insurgent group but is a declared terrorist organisation, as per the US state department’s decision. In fact, few among them went so far in their pursuit of spreading disinformation and causing unnecessary chaos that they started circulating the portrait of popular Pakistani actor Usman Mukhtar in a SSG uniform, as so-called “Captain Daniyal” (see Figure 4), who was killed during Panjgur attack. During Indo-Pak border clashes or heightened tensions, Indian Twitter space has previously misused pictures of Pakistani actors and artists for advancing their propaganda. 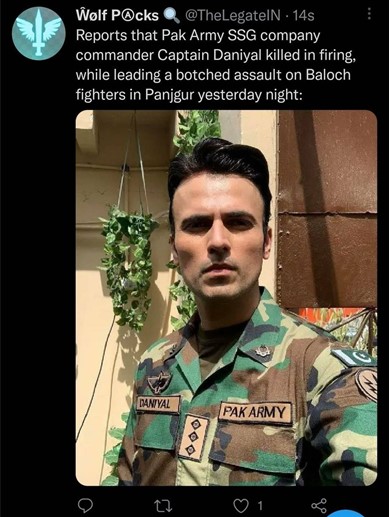 Besides the regular tactics of sharing out-of-context videos from previous conflicts, this time, a make-do infographic was also spotted on Twitter – explaining the objectives and exploits of the so-called “Operation Ganjal” (see Figure 5 and 6). Such content is rarely ever taken seriously or given considerable heed, for that matter. Nonetheless, the easy availability and accessibility of fake information and fabricated stats on social media is a grim affair that calls for earnest regulations from the networking company. 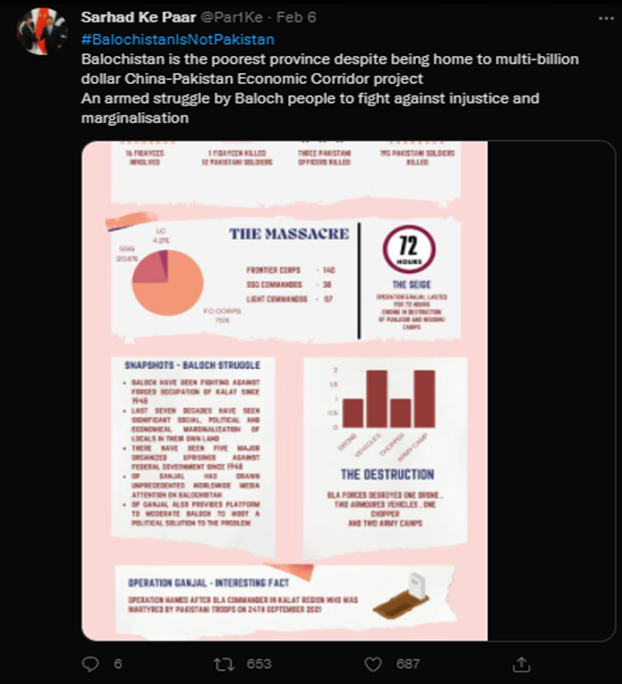 Indian social media space regularly suffers from infodemic. The latest developments, such as those demonstrated above, have only added to an already lengthy list of propaganda usually directed at Pakistan. In recent years, trends on Twitter have been a significant reflection or indication of a nation’s inclination towards a particular narrative. Indian obsession with inciting disinformation, exploiting Pakistan’s security situations, and capitalising on the existing or emerging fault lines is a source of vital concern. Pakistan holds India directly responsible for its dismantling security conditions, although New Delhi frequently denies Indian involvement or support to the terrorist organisation in Pakistan. But disinformation by Indian-based social media accounts, compounded with other irrefutable pieces of evidence, is increasingly making it difficult to agree with the Indian line of argument.

The damage in reputation that such tactics inflict and the degree of instability disinformation operations can constitute, in visibly unstable situations, is precarious for all responsible states. Pakistan has often addressed India’s use of social media platforms for political purposes. Still, so far, no concrete efforts have been conjured to deal with this elephant in the room effectively. Moreover, consequential  curfew in Quetta during and after the attacks also made reporting of affairs troublesome for journalists in Pakistan. Since lack of information is a crucial element in successfully conducting disinformation propaganda, thus, Islamabad ought to be more mindful of in-time reporting.

*Surely, there would be more than those reported here; only those most prominent and active during terrorist attacks have been reviewed.