South Korea’s new government has signalled a keenness to consider expanding its use of the US-deployed Terminal High Altitude Area Defence (THAAD) missile shield, citing the growing threat from North Korean missiles. This goes against the policies that the previous government has followed since 2017. South Korean deployment of the US-led THAAD missile defence system in 2016 was a contentious issue with China which saw it as a direct infringement on its security. Moreover, the US, South Korea and Japan conducted a ballistic missile defence exercise off Hawaii from August 8-14 during multinational Pacific Dragon drills. The Pentagon claimed that reviving combined drills aimed at securing against North Korea and China.

US-led missile defence deployments in South Korea in 2016 have been a bone of contention between Seoul and Beijing. China’s retaliation took the form of unofficial economic sanctions against South Korea. The Moon Jae-in administration of South Korea decided against deploying additional missile defence systems to placate China in 2017. Subsequently, it followed the policy of the “Three Nos”. This refers to Moon’s pledge not to increase THAAD deployments, participate in a US-led global missile shield, or create a trilateral military alliance involving Japan. Yet, the new South Korean government seems to have backtracked on the Three Nos. During negotiations between China and South Korean Foreign Minister Park Jin in August, Beijing argued that no more THAAD batteries should be deployed in South Korea due to the Three Nos policy of the previous administration. South Korea believes that Three Nos was not an agreement or pledge but an explanation of their position. The new government of President Yoon Suk Yeol maintains that those do not represent formal agreements and that they do not bind Seoul.

South Korea’s Foreign Ministry Spokesperson stated that anything limiting their sovereign right and national security is “not subject to negotiations.” In the August 10 statement, the foreign ministry maintained that THAAD is “a means of self-defence” for protecting their people against North Korean threats and that “it’s not a matter for discussion.”

By deploying THAAD systems in South Korea, practically at China’s doorstep, the US hopes to be at a strategic advantage which China vehemently objects to.

Earlier in July 2022, Chinese Foreign Ministry spokesperson Zhao Lijian said that a commitment should be “kept despite change of government.” He maintained that the Chinese opposition to the US deployment of THAAD in South Korea does not target Seoul, “but the US malicious intention to deliberately undermine China’s strategic security.” Beijing has called upon Yoon to honour assurances made by the previous administration.

South Korea and the US also conducted the Ulchi Freedom Shield joint exercises from August 22 to September 1, 2022. They were scaled down and postponed over the last few years to make room for diplomacy with North Korea. The US and South Korea claim their exercises as defensive. But, this will surely draw an angry reaction from North Korea. China, North Korea’s main ally, expressed concern over US military exercises with its Asian allies, saying it will raise tensions with North Korea and bring instability to the Korean Peninsula.

THAAD is a transportable system capable of intercepting ballistic missiles during their final or terminal phase. It incorporates an X-band radar, the Army Navy/Transportable Radar Surveillance (AN/TPY-2), and a single-stage, hit-to-kill interceptor to intercept and destroy ballistic missiles inside (endoatmospheric) or outside of the atmosphere (exoatmospheric). Developed by the US, it occupies mid-tier in the US ballistic missile defence system. It can intercept short, medium and intermediate-range ballistic missiles. The system can defend targets at ranges of 150-200 km. The AN/TPY-2 radar is capable of detecting and tracking enemy missiles at ranges of 870 to 3,000 km. The launcher trucks have eight interceptor missiles which, once an incoming missile is detected, can be launched to intercept it.

China and Russia have expressed concern over the deployment of the THAAD system in South Korea. China has expressed particular concern over the range of the AN/TPY-2 radar, which can detect missile launches and activity up to 1,000 km inside Chinese territory. This essentially puts parts of mainland China and some areas of eastern Russia within range of the radar, whereby the US can monitor its missile activity. THAAD interceptors are already deployed in the UAE, Guam, South Korea, the US (including Hawaii), and Saudi Arabia. There is also possible deployment or sale of THAAD systems to Japan which would further heighten tensions with China. 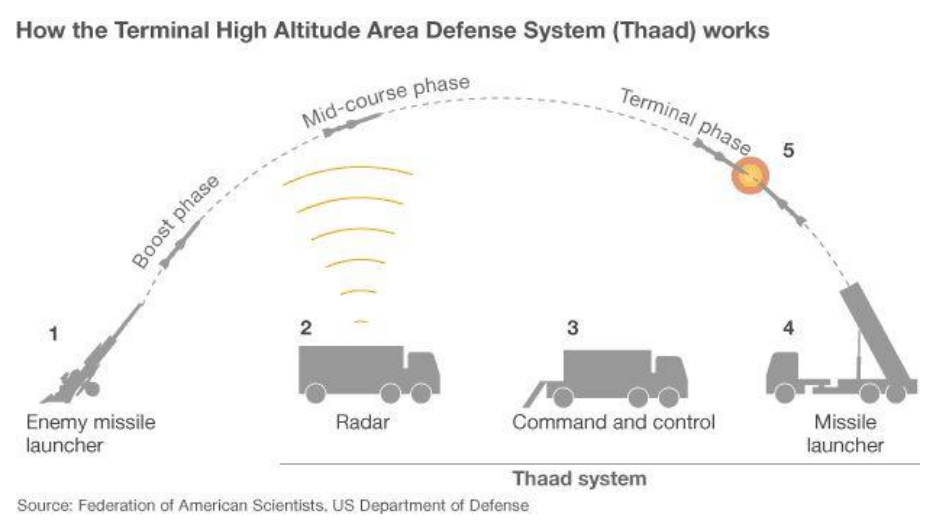 Internationally, China and Russia have raised concerns that the system would affect the regional security balance. China’s concerns centre around THAAD’s radar systems that could potentially help the US better detect any missiles China may launch in a future conflict. Having a radar at China’s doorstep means it allows the US to detect incoming missiles early and would provide it with an edge in a conflict. China, on the other hand, cannot put radars near US territory, which would give the latter a strategic advantage in a nuclear conflict.

Thus, in the past, China has vigorously objected to the deployment of the THAAD system in its immediate neighbourhood. It continues to do so, arguing that it would destabilise the regional security balance and do little to counter the threat posed by the North Korean missile programme. China imposed economic sanctions against South Korea in 2017 and could tighten the economic noose around Seoul if the latter decides to deploy more THAAD batteries or backtrack on the other informal commitments to the Three Nos.

When seen in the larger context of US-China competition, the issue of deployment of additional batteries of THAAD becomes significant. The US policies are majorly centred around a rising China. By deploying THAAD systems in South Korea, practically at China’s doorstep, the US hopes to be at a strategic advantage. The missile defence exercise between the US, South Korean, and Japanese forces also appear to be a part of this strategic competition and encirclement of China. Also apparent is the pro-US tilt of the new South Korean government, which is sure to exacerbate tensions with China. It may lead to direct confrontation between Seoul and Beijing or, at a minimum, further economic retaliation. South Korea needs to exercise a balancing act whereby it has to live as a neighbour of a rising China that it cannot antagonise. At the same time, it needs to put its alliance with the US in perspective.