Freelance Indian journalist Aveek Sen, who covers mostly cybersecurity and geopolitical issues of India and its periphery, was involved in an online spat against elements sympathetic to the ruling Bharatiya Janata Party (BJP) in March. These tweets opened a Pandora’s Box regarding unprecedented functional collusion between BJP troll farms and a former Military Intelligence (MI) officer of the Indian Army.

Aveek claimed that Colonel Dibya Satpathy of the Indian Army, a former MI officer, has been colluding with BJP troll farms for vested interests without the knowledge and approval of his superiors. Reportedly, Dibya was involved in these activities while being the Joint Secretary at India’s external intelligence service, the Research & Analysis Wing (R&AW). Some of his purported collaborators include Major Neelam “Neel” Kumari alias “The Skin Doctor” and Major Gaurav Arya, both veterans of the Indian Army. They are vociferously known to propagate views converging with those of the BJP. Gaurav, in particular, is renowned for his regular spate of targeted campaigns against the Pakistan Army. Aveek further claims that Dibya was suspended from R&AW “for working with the Americans” and “hid from his bosses at R&AW that he was freelancing with BJP politicians”.

Some of the fronts, setup by Colonel Dibya Satpathy, per Aveek Sen’s revelation, include:

If one is to believe Aveek’s revelations, Colonel Dibya Satpathy has been directing information operations campaigns against Pakistan at the behest of both R&AW and the BJP. Internal issues aside, the agenda of discrediting Pakistan remains a point of convergence for both patronising entities.

Root N Wings Media is a social media campaign agency and had put up recruitment ads for candidates, seeking social media experts proficient in research and “political campaigning”. The company was established in 2015 and apparently has no more than ten employees, typical of an intelligence front. Per Aveek, Root N Wings is set up on two floors, one managed by Ajayendra Urmila Tripathi and the other by an individual who operates a satirical online persona named “Aji Haan”. Open source examination of Ajayendra’s resume confirms his identity as Chief Technical Officer at Roon N Wings, where some of his stated responsibilities include “landscape analysis”, “campaign structure”, and “communication approach”. On the technical front, he also oversees “ethical hacking”, “data mining”, and “making new tools as per requirement”. These terminologies and descriptions are indicative of what one could expect in a lobbying group and/or intelligence unit. 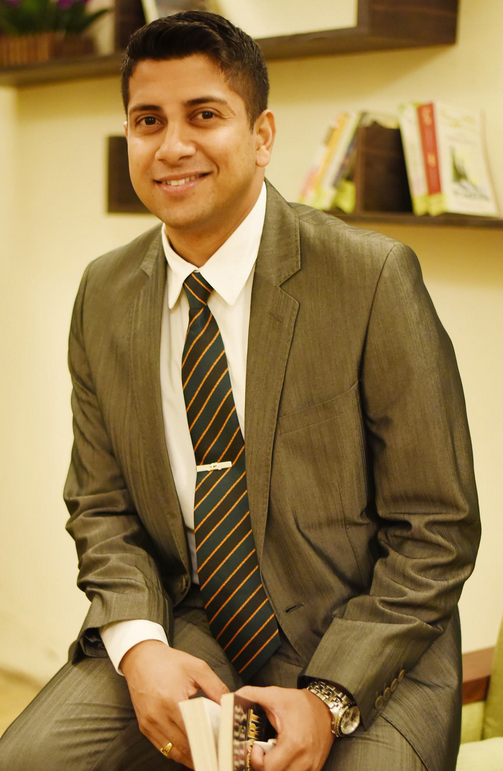 Dibya Satpathy alias “Shakti” (professional nickname) alias “Ricky” (among friends) is a published author (when he was in Major rank) from Odisha. He also wrote an analytical piece on Balakot strikes for the Indian Defence Review in which he concluded, “The only way to make it (Pakistan) relent is by mounting the cost each time such a misadventure is directed against India. It may be too early to expect a change in Pakistan’s strategy against India, making it economically and diplomatically unaffordable should be the most potent strategy to adopt”.

If one is to believe Aveek’s revelations, Colonel Dibya Satpathy has been directing information operations campaigns against Pakistan at the behest of both R&AW and the BJP. Internal issues aside, the agenda of discrediting Pakistan remains a point of convergence for both patronising entities.

Aveek revealed that he set up the website “thedisinfolab.org”, a shoddy version of the EU DisinfoLab that takes jibes at critics of India’s security establishment and also the BJP. He laments, however, that he started this venture mistaking it “for a R&AW op”, when in fact, it was BJP sponsored. 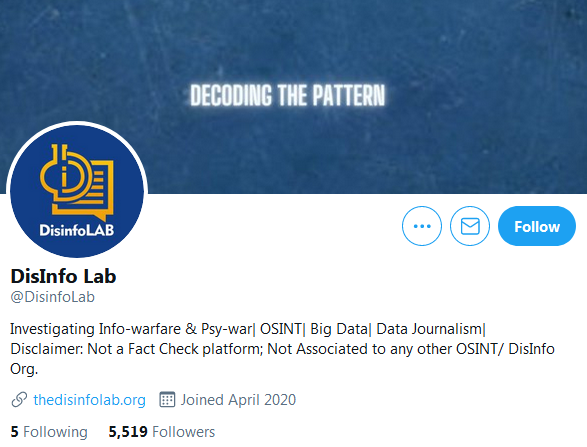 Some of the investigative reports published by this website include one aiming to discredit the United States Commission on International Religious Freedom (USCIRF) for being “sympathetic” to “Pakistan’s jihadi network”, a report on “Pakistan’s 5th generation warfare”, an “expose” to defame protesting farmers in Indian Punjab and one report targeting Pieter Friedrich particularly, a reporter who has documented and reported on the Hindutva organisation Rashtriya Swayamsevak Sangh (RSS), paramilitary patron of the BJP.

Taha Siddiqui and “The International Herald”

Aveek claimed that another fake setup, “The International Herald (TIH)”, was presented as a project of Colonel Dibya (R&AW) but instead turned out to be pushed by former BJP spokesperson and political candidate Tajinder Pal Singh Bagga. He references the November 2019 tweet of a dissident Pakistani journalist in self-exile, Taha Siddiqui, who shared the link to his article on TIH targeting Pakistan Army chief General Qamar Javed Bajwa and insinuating about his term extension’s impact on military ranks.

The agenda is obviously to try and create fissures across Pakistan’s political spectrum while also promoting a negative image of the army. 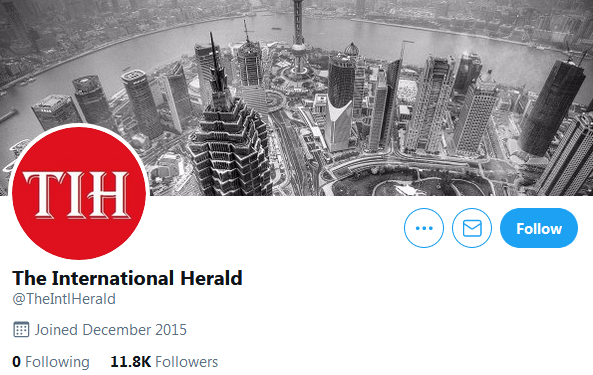 To prove his point, Aveek published a comprehensive list of TIH Twitter followers (descending order of newest to oldest), where Tajinder Pal Singh Bagga’s name pops up from among the first ten followers while also being mentioned in several tweets of TIH.

Even more interesting is the publication of an online payment receipt of € 103.04 in the name of Taha Siddiqui. Aveek says that he commissioned Taha to write the piece on Pakistan Army for TIH vide Transaction ID 7D364272BG4114147. 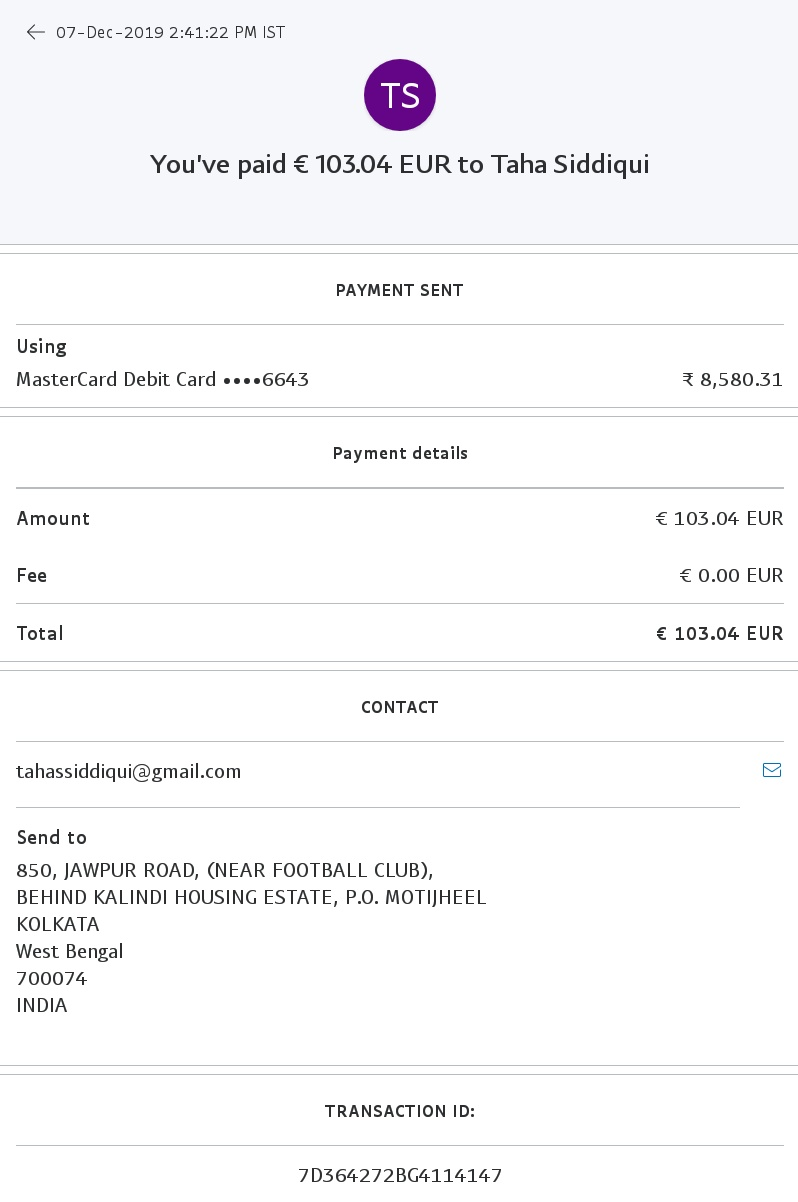 Taha Siddiqui is an active critic of Pakistan’s military establishment, advocating for “action” against the State of Pakistan, including by the Financial Action Task Force (FATF) and the United Nations (UN), among others. That he was apparently commissioned by an R&AW/BJP front to write against the Pakistan Army is unsurprising but makes for an interesting case study by authorities concerned.

Further open-source research, not mentioned by Aveek Sen, revealed that the website of TIH (now defunct) was, in fact, registered in 2018 in the name of Tajinder Pal Singh Bagga himself. This confirms the BJP’s digital footprints over vicious information operations targeting Pakistan’s national security leadership in connivance with dissidents such as Taha Siddiqui. 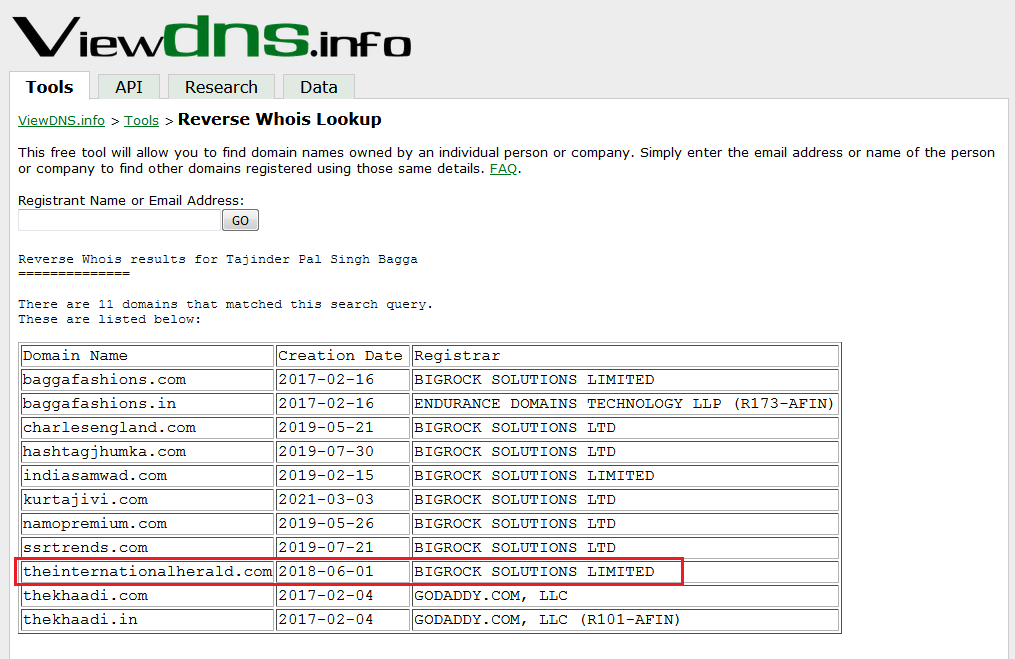 List of domain names registered in the name of Tajinder Pal Singh Bagga, probed by the author (Source)

Aveek Sen’s revelations confirm, to an extent, that there exists a functional relationship between India’s security establishment and troll farms patronised by the BJP. Such behaviour has been observed in the past as well. However, more questions need to be ascertained, such as why a purported double-agent for the US (Colonel Dibya Satpathy) would knowingly work with the BJP in campaigns targeting political and strategic adversaries.

The EU DisinfoLab report on Indian-origin disinformation directed against Pakistan uncovered the involvement of the Srivastava Family, who this author assessed are contractors-for-hire. In this particular context, we have interesting collusion of security-cum-political officials involved in organised propaganda.