Russia-Ukraine Crises: A Cause of Russia’s Compellence Strategy or NATO Expansionism?

“There are decades where nothing happens; and there are weeks where decades happen.”

The Russian-Ukraine conflict has become one of the top current stories discussed on media outlets every day across the globe. Tensions between both countries have been simmering since Russia invaded Ukraine. Despite two rounds of peace agreements in Belarus, no political solution has been accomplished, as talks end without any ceasefire.

Ahead of the Russian invasion of Ukraine, several western academicians and military observers believed that Russia’s President Vladimir Vladimirovich Putin was practising a compellence strategy to invade Ukraine. In the opposing view, the Russian officials and some other practitioners, even the US Scholars, accused the US-led North Atlantic Treaty Organisation (NATO) and European Union (EU) enlargement of bringing out the ongoing hostilities between Moscow and Kyiv. Also, some believe that the US democracy promotion to expand its sphere of influence into what a former Russian president Dmitry Anatolyevich Medvedev called Moscow’s ‘privileged zone of interest’ is an underlying cause of the crisis in Ukraine.

As fighting surged furiously across Ukraine, the US- Russia blame game for escalating the tensions between both states is not a conflict escalated by one but has a bifold story. Two versions of reality revolve around the current scenario; A western perspective, particularly the US point of view and the Russian perspective, which indicts the US and its allies. However, the historical roots of the conflict, the interest of the intervening states, especially those having benefited and are still profited during such unrests, can reveal the real story.

From Russia’s point of view, following the severe geographical asymmetry resulting from NATO and EU expansionism, its activities in Ukraine are essentially for defensive means, rather than offensive and expansionist.

The more predominant perception in the West is that Moscow has always been an expansionist state, considering Putin is an embodiment of the Russians’ ambitions of expanding its country into a ‘Russian empire’. While denouncing Moscow’s attack on Ukraine on 24 February, President Joe Biden argued that the actions of Putin and his Kremlin allies are a precise manifestation of the President’s quest for making an empire “by any means necessary”. However, for Russia, the role of geography can not be overestimated as it is the chief driver of Russia’s foreign policy. The country and its security policy have been shaped by the lack of natural geographical barriers such as oceans, rivers and mountains. Historically, it has shaped the Russian identity and enhanced its rulers’ conception of security. If the security policy of Russia is closely linked with its geography, they might be expanding their territory more for its defensive cause than making the country’s territory bigger.

From Russia’s point of view, following the severe geographical asymmetry resulting from NATO and EU expansionism, its activities in Ukraine are essentially for defensive means, rather than offensive and expansionist. Considering the threat posed by NATO expansionism Russia’s security concerns are genuine. Before starting the operation, Putin accused the US of dragging Russia and Ukraine into the war, saying that America wants to use “confrontation as a pretext” to impose more sanctions on Moscow. Hence, by deploying weapons and a large number of troops near the Russian-Ukrainian border, Putin would think about deterring not only Ukraine to join NATO but also deter the North Atlantic Alliance to repudiate Kyiv’s membership. It was a years-long warning of Moscow and other western scholars that such expansionism may lead to a catastrophe.

Moscow’s recent military build-up near the Russian-Ukrainian border which consequently led to an operation is not a week old. It has decades-long causes to be contemplated on. The current CIA Director, William J. Burns, when he was a political officer in the US Embassy in Russia, warned about the cataclysmic effect of NATO’s enlargement since 1995. Moreover, one of the influential American foreign policy experts since the end of the Cold War, John Joseph Mearsheimer accused the US of being solely responsible for the current predicament in Ukraine. According to him, the occurrence of this quandary can be linked with the 2008 NATO Summit in Bucharest, declaring that Ukraine and Georgia would become members of the NATO and would compel Russia to go against them – viewing this as an existential threat to the country’s national security. In 1997, the Russian President, Boris Nikolayevich Yeltsin approved the document of National Security Blueprint of the Russian Federation, stated that “the prospect of NATO expansion to the East is unacceptable to Russia since it represents a threat to its national security.”

If we look at the eastward expansionism of NATO post-2014 in the figure 1 shown below, Ukraine and Georgia are asking for NATO membership, and Finland and Sweden are also considering becoming a member. Besides Belarus, the rest of the countries in the east are already part of NATO. Therefore, Putin might be deeming it, in fact, a grave threat to the Russian Federation. 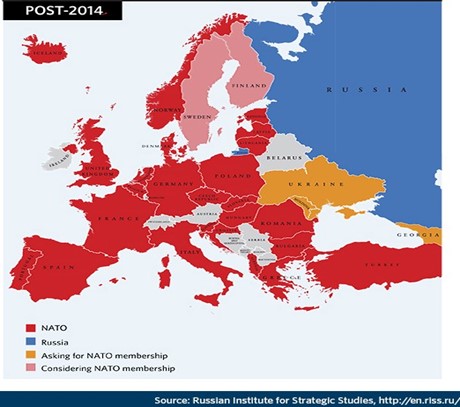 While putting the onus on Russia for the ongoing detriment in Ukraine, the western media, officials’ statements and think tanks should not overlook the strategic blunders of the US since the collapse of the USSR in 1991. Expanding the North Atlantic Alliance from 16 members states in 1990 to  30 members today is sometimes described as what the Democratic Socialists of America called “imperialist expansion”. It will not be wrong to say that Uncle Sam has always benefited from the war economically, as the country’s military-industrial complex expanded unceasingly since World War II. Currently, Ukraine is in a quest for heavy and advanced arms to safeguard itself from the Russian attacks. The supply of munitions to Ukraine is coming from some NATO states, but the main contributor within NATO is the United States, lending arms to a non-NATO ally, Ukraine. Days after the Russian invasion of Ukraine, President Biden ordered the US State Department to supply $350 million worth of weapons to Ukraine under the Foreign Assistant Act. In the last month of 2017, President Donald J Trump also approved an arms sale license for Ukraine to import $47 million worth of weapons from the US. Such worrisome figures and the continuation of military aid policy in both Trump and Biden presidencies might have provoked Putin to attack Ukraine. The EU enlargement has been bashed out in a similar way that triggered Putin and his government.

Sajjad Ahmad is working as a Communications Assistant at CSCR.