The Recent Leadership Changes in the Indian Navy

These new leadership appointments come at a time when the Indian Armed Forces are struggling to reach an agreement on theaterisation plans, which includes the formation of an integrated Maritime Theatre Command (MTC). Moreover, the growing presence of Trans-Atlantic countries in the regional waters, guided by their respective Indo-Pacific strategies, has played to the Indian Navy’s advantage and has given it a more visible presence compared to the other two services. 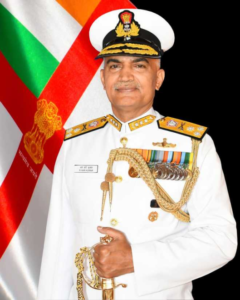 Kumar was commissioned in 1983 in the Navy’s Executive Branch and is a gunnery (naval artillery) specialist. During his service, he commanded various warships, including the aircraft carrier INS Viraat (decommissioned), destroyer INS Ranvir and corvettes INS Nishank and INS Kora.

He completed a Naval Staff Course from the US Naval War College. He later received a Master’s degree from King’s College London, followed by an M. Phil from the University of Mumbai. He then attended the Army Higher Command Course at the Army War College, Mhow (India) and later joined the UK-based Royal College of Defence Studies. The professional military education in an army institute within India is worth noting and would help promote “jointness” between the tri-services, an issue with which the Indian Armed Forces are still grappling.

Upon promotion to flag rank, Kumar was the inaugural Commandant of the Naval War College, Goa (previously functioning as College of the Naval Warfare with less sophisticated training courses). Later, he was a part of the delivery acceptance team for India’s incumbent and flagship aircraft carrier INS Vikramaditya, which entered the service in 2013. He was subsequently appointed as Flag Officer Sea Training (FOST) at SNC and later as FOC of the Western Fleet.

In early 2015, Kumar led Western Fleet’s successful participation in Theatre-level Readiness and Operational Exercise (TROPEX), which witnessed participation of both aircraft carriers INS Viraat and INS Vikramaditya, besides other frontline warships. Several months later, he hosted Israel Navy’s Commander-in-Chief, Vice Admiral Ram Rutberg, at WNC. Rutberg was given a tour aboard INS Kolkata by Kumar and later at the Naval Dockyard Mumbai. Two months later, after relieving command of Western Fleet to Rear Admiral (now Vice Admiral) Ravneet Singh, the current Deputy Chief of Naval Staff (DCNS), Kumar was promoted to Vice Admiral and appointed FOC of Western Fleet (FOCWF). He was later appointed the Chief of Staff at WNC and then at Naval Headquarters (NHQ) as Controller Personnel Services (CPS) before being designated the Chief of Personnel (COP). 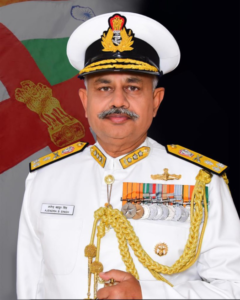 Singh was commissioned in 1983 in the Navy’s Executive Branch and is a specialist in navigation and aircraft direction. During his service, he commanded various warships, including the aircraft carrier INS Viraat (decommissioned), missile boat INS Veet and frigates INS Vindhyagiri, and INS Trishul. All these ships were later decommissioned except INS Trishul, which remains active. He also served as Navigating Officer aboard corvette INS Kamorta and frigate INS Ranjit.

Besides his domestic military education and training, he is a Master’s graduate from Cranfield University, UK. He served two tenures at the Directorate of Naval Plans in NHQ; as Deputy Director and later Principal Director. During the latter term, Singh participated in the eighth edition of “Regional Seapower Symposium” hosted by the Italian Navy in Venice (2010), in which he stressed the danger of asymmetric warfare from the sea while citing the example of alleged Pakistan-based militants who harboured into Mumbai for the 26/11 attacks of 2008. This served as a pretext for his emphasis on enhanced Maritime Situational Awareness among regional and extra-regional navies.

While at NHQ, Singh also set up and served as inaugural Principal Director of the Directorate of Strategy, Concepts and Transformation. Other staff appointments include Flag Officer of the AOB Project (to set up an Alternative Operational Base in Vizag under Eastern Naval Command) and Assistant Chief of Naval Staff (Policy and Plans).

Subsequently, he was appointed FOC of Eastern Fleet (FOCEF). Pursuant to this tenure, Singh was promoted to Vice Admiral and established as Deputy C-in-C of Strategic Forces Command (SFC) under the then C-in-C Lieutenant General Amit Sharma. Singh served in this position for two years before being moved to WNC as Chief of Staff. After that, he was deputed to IDS as Deputy Chief of IDS (Doctrine Organisation Training). He served first under Lieutenant General Podali Shankar Rajeshwar and later Vice Admiral Radhakrishnan Hari Kumar (incumbent CNS).

He had served in the ENC barely for nine months as FOC-in-C before being appointed as Kumar’s successor at WNC. During this brief tenure, he hosted the visiting US Chief of Naval Operations, Admiral Mike Gilday, in the Bay of Bengal during Exercise Malabar involving naval forces from the Quad countries (US, India, Japan and Australia). 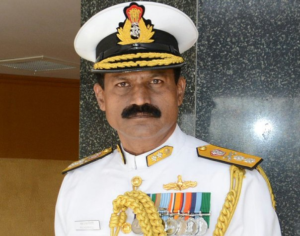 Hampiholi was commissioned in 1985 in the Navy’s Executive Branch and is a specialist in Anti-Submarine Warfare (ASW). During his service, he served as an ASW specialist aboard the frigates INS Himgiri and INS Ganga, as well as corvette INS Agray. He later commanded various ships, including missile vessel INS Nashak, amphibious warfare vessel INS Magar and frigate INS Talwar. He also has the distinction of commanding the National Coast Guard of Mauritius.

His tenure is filled with various instructional appointments, such as ASW School in Kochi and later Senior Directing Staff at the Naval War College, Goa (of which incumbent CNS Kumar was the inaugural Commandant). Staff appointments at NHQ include Joint Director of Personnel and Principal Director of Staff Requirements. Upon promotion to flag rank, Hampiholi served as an Assistant Chief of Naval Staff (Human Resource Development).

Later, he served as FOST at SNC before being appointed FOCWF. Subsequently, he was promoted to Vice Admiral and appointed as the Director General Naval Operations (DGNO) in place of Vice Admiral Satish Namdeo Ghormade, the incumbent Vice Chief of Naval Staff, who was moved as FOCEF. After his stint as DGNO, Hampiholi was appointed as the Commandant of the Indian Naval Academy. 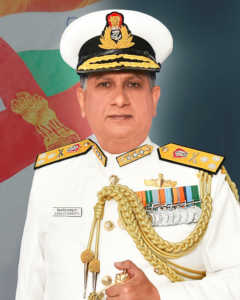 Dasgupta was commissioned in 1985 in the Navy’s Executive Branch and is a specialist in Navigation and Direction. He served as Navigating Officer aboard the minesweeper INS Bhavnagar, corvette INS Androth and destroyer INS Ranvir. Various ships that he commanded early in his career include aircraft carrier INS Viraat, missile vessel INS Nishank, corvette INS Karmur and frigate INS Tabar.

He is a graduate of the staff course at Defence Services Command and Staff College in Bangladesh. It is worth mentioning that his domestic military education includes a higher command course at the Army War College. His future instructional appointments include Directing Staff at the tri-services Defence Services Staff College, Wellington and Officer-in-Charge at the Navigation and Direction School.

He has enjoyed multiple stints across the western seaboard, including the Fleet Operations Officer at Western Fleet and later the Chief Staff Officer (Operations) at WNC. In the latter designation, he oversaw Operation Neer (Humanitarian Assistance and Disaster Relief operations for the Maldives) and Operation Raahat (evacuation of Indian citizens and foreigners from Yemen during the Saudi-led intervention).

Interestingly, all incumbent Quad member naval chiefs (except Admiral Michael Gilday of the US) are UNSWC alumni.

Similarly, he served on multiple occasions in the eastern theatre as FOCEF and later as the Chief of Staff at ENC, taking the helm from the now-VCNS Vice Admiral Satish Namdeo Ghormade. During his stint as FOCEF, the Indian Armed Forces mutually agreed to convert separate bilateral services with Russia (under Exercise “Indra”) into an integrated joint exercise involving elements of tri-services. He visited Russia for the inauguration of Indra 2017 at the Russian Navy’s Pacific Fleet training centre. At the NHQ also, Dasgupta served on various appointments, including Commander Workup, earlier in his career and later as a Naval Assistant to CNS.

Upon taking charge as FOC-in-C ENC, Dasgupta announced he would host the President’s Fleet Review (the third such occasion for ENC since 1953) and the 11th iteration of multilateral biennial naval exercise “Milan” early next year. In an unusual change, Milan 2022 would be held in Vishakapatnam port of Andhra Pradesh (India’s eastern seaboard) instead of Port Blair in the Andaman & Nicobar Islands, where they have been traditionally held. These events would certainly add much pomp and show to the ENC, as it was mainly in the spotlight due to tensions with China in the Eastern Indian Ocean.

The elevation of Admiral Radhakrishnan Hari Kumar to CNS was in popular speculation since the past year, primarily due to his credentials as an alumnus of the US Naval War College (USNWC), which gave him an advantage for strategic partnerships in the West-led Indo-Pacific framework. He is the ninth Indian CNS and a USNWC alumnus, the last being Admiral Robin Kumar Dhowan (2014-16).

Interestingly, all incumbent Quad member naval chiefs (except Admiral Michael Gilday of the US) are UNSWC alumni. In this perspective, Kumar has been groomed in the same institutional higher learning as his Japanese counterpart Admiral Hiroshi Yamamura and his Australian counterpart, Vice Admiral Michael Noonan.

Kumar and FOC-in-C WNC Vice Admiral Ajendra Bahadur Singh were commissioned in the same year (the former being a few months senior). Notably, both have prior experience working directly at IDS to facilitate their coordination with the Department of Military Affairs led by Kumar’s former boss, General Bipin Rawat.

Singh’s recent appointment was perhaps finalised after consultations between Kumar and his outgoing predecessor, Admiral Karambir Singh. Kumar himself never had a mid to senior-level stint at the ENC, so it was only rational for him to move out his equal to handle affairs at the strategically significant WNC (Singh does have prior experience there as Chief of Staff). The proposed MTC plans an integrated headquarters at INS Kadamba in Karwar (under WNC) and would require careful restructuring. However, the likelihood that this process is completed on time is low.

As the Indian Navy is becoming more assertive and is spearheading India’s military diplomacy in the region, Kumar’s headship would foster improved relations with sister services which may witness reduced inter-service contentions and a unified focus toward managing the “two-front threat” from China and Pakistan.