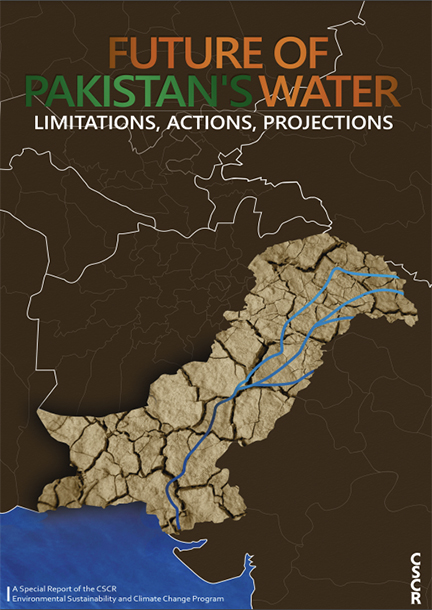 Future of Pakistan’s Water Limitations, Actions, Projections Water scarcity, defined as the unavailability or inaccessibility of adequate fresh water for environmental and human uses, is considered to be the next probable cause of global conflict, given the important economic, social, and political roles that are attached to this natural resource. According to the United Nation’s Water Development Report (2018), approximately 3.6 billion people around the world are living in areas where either water levels are extremely low or are diminishing quickly.

This means that water shortage is threatening the lives of almost half of the world’s population, who could be facing drought like conditions in the near future. Ultimately, water will become an absolute limiting factor for overall development as well. For an agrarian economy like Pakistan, dearth of water can have serious social and economic repercussions. Considering the aforementioned scenario, this book presents a comprehensive analysis of the water scarcity problem in Pakistan. It adheres to the definition of water scarcity as provided by the Food and Agriculture Organisation of the United Nations (UN), which expresses it in more relative and dynamic terms as “the lack of stability between water availability and its consumption” that can weaken if specific conservational actions fail to follow. Pakistan’s water related challenges stem from several factors such as its relations with neighbouring upper riparians whose activities upstream are threatening the flow of water downstream, lack of adequate storage options as the available water flows into the sea, limited reservoir capacity due to high rates of sedimentation, receding ground water due to excessive use of tube wells and the contamination of fresh water because of wrongful waste water disposal. Pakistan barely receives 250 mm of annual rainfall which makes it one of the most arid states in the world. According to the Water Aid Report (2016), the average water available for each person in Pakistan is about 908 m3 cubic meters which shows a decline of over 406 per cent since the 1950s.

Water quantities are unevenly spread across the country, where one region receives more water than the others. In this regard, this policy brief will investigate the overall concerns of the involved stakeholders, along with the future implications which the dearth of water will have for Pakistan as a whole. There is a need to stress upon the importance of water equality and right of water for all.

is Managing Editor at the Center for Strategic and Contemporary Research.