The growth and influence of China in the Arctic region have undergone a gradual and well-calculated shift from the scientific to the political domain, strengthening its claims and possessing sovereign territorial rights over the area. To second its goals, China has adopted identity diplomacy by generating a discourse calling itself a “near-arctic state” in its 2018 first comprehensive white paper on Arctic Policy. Likewise, it is strengthening its relationship with resurging Russia for mutual gains. This indicates the far-reaching Chinese interests in the melting ice sheets of the arctic region.

Research institutes in China regard public spaces such as the polar regions, especially the Arctic, as “the most competitive resource treasures” where the next “great power game” will be played on the basis of its geopolitical significance. Earlier, most of the research carried out by these institutes and experts was related to natural sciences, but the last ten years have witnessed an increase in political and human science research on the Arctic region. China’s political, scientific, economic and military aspirations in the Arctic demonstrate its commitment to becoming a “polar great power”. 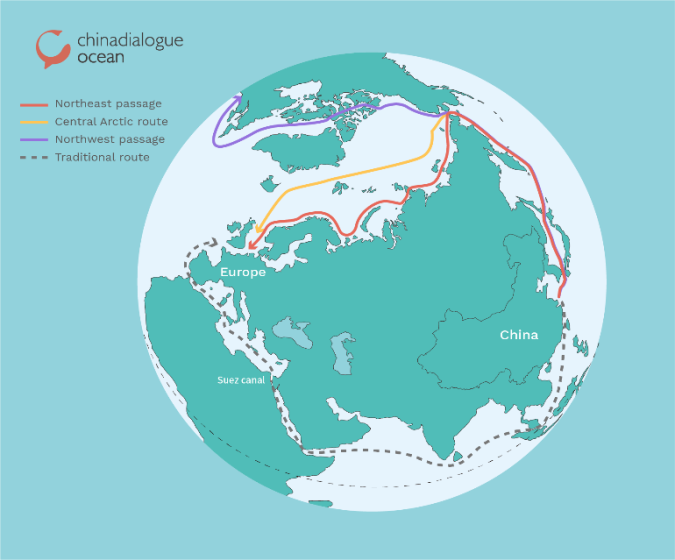 There are two major geostrategic interests for China in the Arctic region; shorter shipping routes and maximisation of energy resources. Under the Polar Silk Route, China plans three passages; Northeast Passage, Northwest Passage and the Central Arctic route. These are carefully designed to reduce shipping distances and become important routes for international trade.

The North East passage that will link Asia with Europe aims to reduce the distance by 3,000 miles while minimising the travel time for ships by as many as 11 days compared to the southern voyage via the Strait of Malacca and the Suez Canal. This route is increasingly being viewed as the next big shipping route over the next decade. Shorter shipping routes throughout the summer months will bring numerous commercial benefits to China.

China’s political, scientific, economic and military aspirations in the Arctic demonstrate its commitment to becoming a “polar great power”.

As for Beijing’s second goal in the Arctic, i.e. the maximisation of energy, about 30% of the world’s undiscovered gas and 13% of the world’s undiscovered oil may be found in the Arctic region. Being a high energy demand country, China aims to take advantage of these untapped natural resources of the arctic through the Russian Yamal Liquefied Natural Gas (LNG) project, in which the country holds a 30% stake. The project is expected to yield 4M tons of LNG per year. Expansion of shipping routes in the region will help China further its LNG transportation and reduce costs. According to a rough estimate, 70% of the Yamal LNG will be transported eastwards, and 30% will be westbound, which presents enormous opportunities for East Asian and European energy consumers to collaborate on developing infrastructure projects. On a side note, China is also becoming one of the biggest investors in the mining activities of the region and has agreed to a free trade deal with Iceland.

The main incentive for China to cooperate with Russia in the region is the development of a trade corridor between Europe and Asia through the Northern Sea Route (NSR). Sino – Russian alliance in the Polar Regions first emerged in 2003 when both nations signed an agreement to cooperate in the use of oceans. Later in the joint statement issued in 2017, the conjunction of the Belt and Road Initiative (BRI) and Eurasian Economic Union (EAEU) was announced along with the development of transport via the NSR. The radical position adopted by the US against China and Russia in the Arctic has increased mutual cooperation between both nations. According to a Congressional report published in 2019, increased Chinese and Russian activities in the Arctic will transform the region into a zone of geopolitical struggle.

Currently, the primary factor behind the prevalent environment of trust and cooperation between the two nations is the leadership role of Presidents Xi Jin Ping and Vladimir Putin. Both the presidents command great authority over their countries while keeping the domestic forces which may hinder cooperation in check. However, this also means that the relations between both nations remain fragile because political variability may put them at stake. But, the situation in the Polar Regions demands stable cooperation and an environment of complete trust without misinterpretation. Therefore, many bilateral initiatives in the Arctic region are yet to be practically implemented.

Another major factor behind the Sino – Russian alliance for the development of the Polar Silk Road is the Russian “Turn to East” policy. Traditionally Russia focused more on the European market and its European identity. But since the European Union (EU) and the US imposed sanctions on Russia after the Crimean crisis of 2014, Russia shifted its focus toward the Asian markets. This has led to the adaptation of new national plans for developing Arctic regions due to their ability to supply Asian markets, emphasising the NSR. For this purpose, the Russian government established the Ministry for the Development of the Russian Far East and Arctic in 2019. These national policies have impacted Russian foreign policy and have increased cooperation between China and Russia. With the development of the NSR, the importance of the arctic transport corridors, especially Primorye 1 and 2, has increased manifold.

Nevertheless, Beijing will likely refrain from investing in infrastructure projects completely managed by the Russian Federation. As for the corridor, the cooperation mutually benefits both nations in terms of national image building. It strengthens their shared view of a multipolar world. Both nations see the development of the Ice Silk Roads and the NSR as a way of strengthening global connectivity.

However, this Sino-Russian nexus has become a source of tension for the US. Greenland, one of the biggest Arctic states, is a part of North America and has political affiliation with Europe, but China, in recent years, has managed to become its largest export market outside of Denmark. US is concerned by China’s growing influence in Greenland, perceiving it as a threat to US influence in the Arctic. The US is growing its ground presence by establishing a consulate in the Danish territory. The contradictions between Denmark and Greenland have led to a pro-independence party coming into administration in Greenland. This implies that Greenland will have to rely on foreign investment to get independence from Denmark, which once again opens the market for Chinese investment.

Ali Afzaal Gondal is currently pursuing a Bachelor's degree in International Relations at the National Defence University, Islamabad. He is a former intern at CSCR.