Electoral System of Pakistan and its Evolution: Proportional Representation

It has been 73 years of Pakistan’s emergence as an independent state on the world map. The political setup that it inherited from the British in 1947 had various issues at first. One of the major issues was to establish a stable political set-up that involved modelling of an electoral process.

The constitution of Pakistan 1973 preserves and explains the electoral system of Pakistan. Article 51 of the constitution explains number of seats in the national assembly and candidates’ requirements, while Part VIII with the title “Elections” is about elections law – election day, roll, responsibilities of authorities, mode of conduct, etc.

The political history of Pakistan experienced many military coups. It has been two decades since the last coup and there have been three successive democratic governments after that. So, Pakistan has achieved political stability to an extent. Now it is high time to move further from core issues to advanced problems.

Evolution is the key to progress. Pakistan needs to explore a better system which can deal with advanced issues. Changes are needed in the electoral system to keep up with the world and to deal with the contemporary problems.

In general, there are two basic electoral systems to elect the members of legislative council. The most used worldwide including Pakistan is “First Past the Post (FPTP)”, while the other is “Proportional Representation” which is implemented in some of the first world countries and under consideration among others.

The First Past the Post is the simplest electoral system, which is implemented in most of the countries such as US, Canada, African States, UK and its former colonies including Pakistan and India. In this method, the voters receive the ballot paper that contains the list of all the candidates from each constituency. The voters get to put a stamp/cross in front of their favorite candidate to choose the one they want to elect as their representative in the legislative assembly. The person who receives maximum votes is elected.

However, there are some flaws in this system. Usually with this method, two big parties make government mostly. Most parties do not tend to make enough seats due to the fewer number of candidates elected. This system also tends to promote “two or few” parties system.

Pakistan has a parliamentary system in which the legislature is elected directly by public voting through secret ballot in constituencies. In the 2013 general elections, Pakistan’s Muslim League – Nawaz (PMLN)  established the government receiving 32.77% of total votes. Similarly in 2018, Pakistan Tehreek-e-Insaf (PTI) won the elections and formed the government by receiving the majority of votes i.e., 31.82%. In both cases, over half of the country’s population did not vote for these parties yet they formed governments based on majority. The system promotes the general will, and not will of all voters. 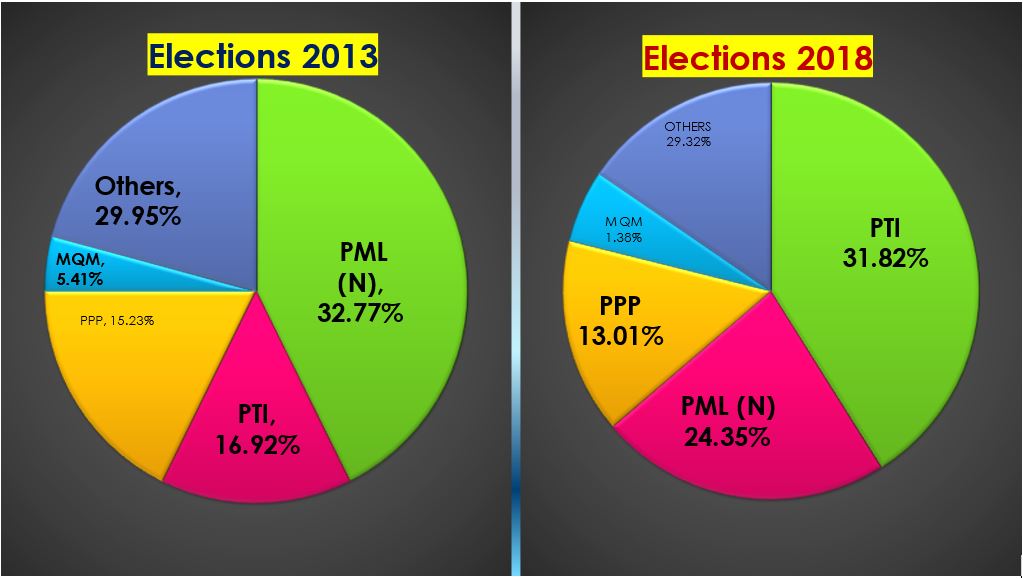 The electoral system of Pakistan has other demons as well, for which it needs to go through a scrutiny. Being a debt-ridden country, Pakistan spends a lot on elections. It is estimated to have spent a whopping amount of Rs440 billion on 2018 elections, which is 10% higher than the total cost of the previous elections of 2013.  The Election Commission of Pakistan tried to put a bar on the amount spent by a single person /seat /constituency to limit the overall expenses of the elections. But in a country like Pakistan the bar is not very effective as all the assets are not declared by people in tax returns, so a lot of involved money is black and hard to track. In case by-elections are required during the mid-tenure, it creates chaos in itself with many violent protests and strikes along with a lot of expenses on the government.

Among many other setbacks of elections in Pakistan, the most major is the swift boating among electables within each constituency. Such politics include defamation and character assassination of the opposite party. Violent fights among opposing parties are also commonly observed in many constituencies. Political parties choose electables that can ensure maximum votes. In this race, many competent candidates refrain from participating.

The post-election scenario is also challenging as the blame game starts among the political parties that last for months. The role of opposition is also uncertain and non-rational which keeps it from focusing on national problems and generating a collective policy to deal with local, regional and global issues. The opposition remains in an effort to destabilise government and end its tenure before the constitutional deadline.

Contrastingly, Proportional Representation is emerging as a new sensation among the developed countries. The political scientists of the countries like Canada, United States (US), and India are exploring variants of proportional representation to mix them with the existing system to have an improved electoral method.

Meanwhile, the proportional system is already adopted in many countries, including Belgium, Denmark, Greece, Italy, Norway, Spain, Israel, and Russia. It is an electoral system that seeks to create a legislative council that reflects the overall distribution of public support for each political party. The FPTP system or majority system on the other hand effectively rewards strong parties and penalises the weaker ones by providing the representation of a whole constituency to a single candidate, who in most cases may be elected by less than 50% of the votes cast. Advocates of proportional representation argue that the purpose of elections is to get a consensus on how a country should be governed, and if the assembly represents the full diversity of opinion of the country, the decisions are regarded as legitimate. There are three methods that can be used to achieve proportional representative electoral system: Single Transferable Vote Method (STV), the Party-List System, the Additional Method System

The single transferable vote method, though not widely adopted, is a system in which parties nominate more than one member for constituencies and people also have to elect more than one person. The public can vote as per their preferences, or the election commission will collect votes and distribute them among candidates through a regulated system.

According to Party List System, the public will not vote for the candidates but for their preferred party. The party itself will engender a list of candidates that can be public or confidential. The party seats will be directly proportional to votes it gets, and later party allocates seats as per the pre-decided list.

The additional method system is a mixed system that is widely adopted. Under this method, half of the seats are elected via constituencies elections and others via proportional representation. Voters cast two votes – one for the preferred person and the other for the party. In this method, mostly the party vote determines the seats for the composition of a legislative assembly.

The most significant benefit we can accomplish via proportional representation is getting rid of constituency politics at the national level. As there will be no more need for electables and their local fames. Therefore, political parties will be encouraged to focus on policies and long-term planning with candidates and put forth genuine experts and technocrats without fear of being beaten out by electables.

When thousands of people vote for a small political party, but the party loses a seat by a margin of a few hundred votes, the votes of thousands of voters go to waste. The proposed system would be effective for smaller parties to get more seats in the National Assembly.

If proportional representation is implied at the national level, the vote of every voter will count in the making of the legislative assembly. A collated government would be established as a result that could focus more on development, relying more on experts and technocrats rather than the members that help win the constituencies. This could also rid the nation of party hoopers in the process.  The amount officials spend during an election will be minimised, and the amount wasted on by-elections will be saved by the system.

Mr. Iqbal lecturer in Faculty of Politics and International Relations at University of Sialkot. He is developing his expertise in field of Foreign Policy and Regional Integration. He has graduated from University of Gujrat (UOG) and National Defence University (NDU).

Dr. Rashid is an Assistant Professor and currently designated as the Head of Department of Politics and International Relations, at University of Sialkot.