Future of Kashmir’s Self Determination Movement 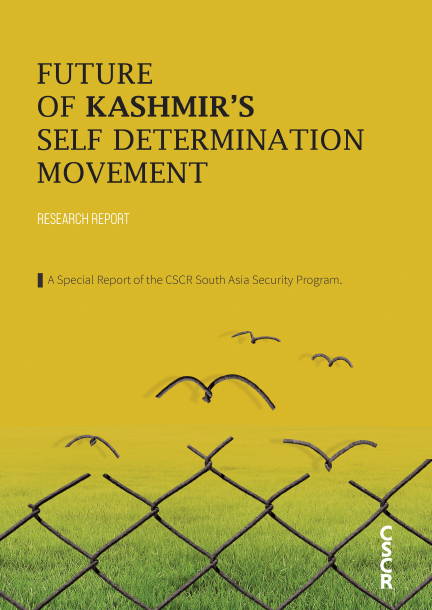 The self-determination movement of Kashmir entered a critical juncture following India’s unilateral revocation of Articles 370 and 35-A from its constitution. This watershed development for the Indian-occupied Kashmir, as well as the larger South Asian region, was followed by increasing Indian hegemonic activities in the disputed territory. This was also coupled with an increase in human rights violations ensued by an escalation in restrictions on political, social, economic liberties, along with extra-judicial killings, arbitrary detentions and an indiscriminate counter-insurgency operation launched by the Indian government.

As of now, Kashmir’s self-determination movement enters its 74th year employing strategic and political dimensions, with a role of indigenous political parties along with armed struggle. Youth and women of the disputed territory have also played a characteristic role in this struggle. However, structural repressions and curbs by the Indian government have considerably shrunk political activity in the region, specifically after August 2019.

Amid the rising tide of nationalism across the globe, the thriving forces of economic interdependence, and the growing convergence of India with the West, the international response to India’s illegal actions and policies has not been much impactful. Also, from differing Indian domestic circles, the popular and hyper-nationalist BJP government has received appreciation for the illegal revocation of Article 370 and 35-A. It is in this backdrop, that a majority of Pakistan-based experts believe that status quo over the Kashmir issue may prevail in the future.

Around 71 per cent of Pakistan’s academic and strategic experts over the Kashmir issue believe that the revocation of Article 370 and 35-A is a direct consequence of expansionist Hindutva ideology, taking roots in India. Another 86 per cent of experts believe that there are negligible chances of socio-economic development in IOJ&K post August 2019. These findings have been gained from a survey conducted by CSCR, as a part of this special research report. The survey has also revealed that a majority of Pakistan’s expert, approximately 80 per cent believe that there prevails a likelihood of limited confrontation over the Kashmir dispute between India and Pakistan. 67 per cent experts believe that a nuclear confrontation between the two countries may take place over the Kashmir issue. Hence, appropriating academic and research faculties towards understanding this issue is even more pertinent now.

In a post-August 2019 scenario, it is important that the people of Kashmir recalibrate and rethink the strategic and non-strategic dimensions of the struggle. Regarding armed struggle, around 62 per cent of Pakistan’s experts believe that the indigenous people of Kashmir should continue their armed struggle. A characteristic role can be played by the Kashmiri diaspora by actively pitching in to shape international opinions. It is also pertinent that Kashmiri’s right of self-determination and armed struggle be sensitised as the legitimate and legal right of the people. The provisions under Geneva Convention, International Covenant on Civil and Political Rights, and the International Humanitarian Law can be tapped for strengthening the legal case of disputed Kashmir.

Around 40 per cent of Pakistani experts believe that Pakistan’s inability to devise a cogent and comprehensive action plan is a major shortcoming in Pakistan’s Kashmir policy. While 92 per cent of the experts displayed their dissatisfaction towards the performance of the Parliamentary Committee on Kashmir, an overwhelming majority does not consider it to be a major shortcoming in Pakistan’s Kashmir policy. Hence, Pakistan can take up several new initiatives in this regard. 36 per cent of the respondents believe that Pakistan should improve its economic standing in order to create a conducive environment for Kashmir and Pakistan. The government of Pakistan can gain the ICJ’s advisory opinion on the Kashmir dispute; however, this is subject to the UNSC and UNGA referral. Pakistan can also push for the establishment and functioning of independent and impartial investigative/fact-finding bodies that can probe into the human rights violations and war crimes perpetrated by the Indian government.

Maryam Raashed is a former Research Assistant at the Centre for Strategic and Contemporary Research. She is a graduate of International Relations from National Defence University, Islamabad.