Jordan is a country that has successfully survived the Arab Uprisings. Despite the widespread protests due to inflation, unemployment and government’s corruption during 2011, the Hashemite monarchy managed to suppress the Arab Uprising through traditional Hashemite methods of political appeasement. Thus at that time, King Abdullah II effectively maintained the status quo of governance in Jordan during the peak of regional instability. However, chaos in neighboring war-torn countries engulfed Jordan with multiple challenges, especially the refugee crisis which is believed to be a root cause of Jordan’s economic crisis. Such chaos in Syria and Iraq triggered a flood of refugees across Jordan’s border and exacerbated endPreview Changes (opens in a new window)emic political, economic, and resource challenges in Jordan which ultimately paved the way to public demonstrations across Jordan.

The current demonstration is the biggest one in the Jordan’s history. Contrary to previous demonstrations, these riots are being led by lawyers, doctors, engineers, pharmacists, journalists, and authors rather than the Muslim Brotherhood. Their basic aim is to put pressure on the government to withdraw its proposed bill for a new income tax law that was presented to Parliament for ratification. The protesters showed discontent to this new tax reform backed by the International Monetary Fund (IMF). This tax proposal is a part of IMF-driven austerity measures since Amman secured a $723 million three-year credit line from the IMF in 2016. It also includes hikes in the general sales tax this year and the abolition of subsidies on bread and oil. In this backdrop, it is necessary to analyze current challenges that Jordan is facing.

Contrary to previous demonstrations, these riots are being led by lawyers, doctors, engineers, pharmacists, journalists, and authors rather than the Muslim Brotherhood.

Being situated at the crossroads of a region in turmoil, Jordan could not escape the consequences of regional Instability. Turmoil in neighboring countries caused a flood of refugees across Jordan’s northern border especially in Syria. There are 657,628 Syrian refugees in Jordan, as per UNHCR report released in February 22, 2018.  Initially, the Government of Jordan benefited politically from the inflow of refugees and provided 46,000 work permits to the Syrian refugees in 2017. As the Syrian conflict became increasingly elusive, the number of refugees from Syria in Jordan swelled. This refugees influx revealed long-present and deepening fissures in Jordan’s economic, political and social infrastructure. As a result, public disenchantment and resentment turned back toward the Jordanian Government, leading to widespread protest against government policies. 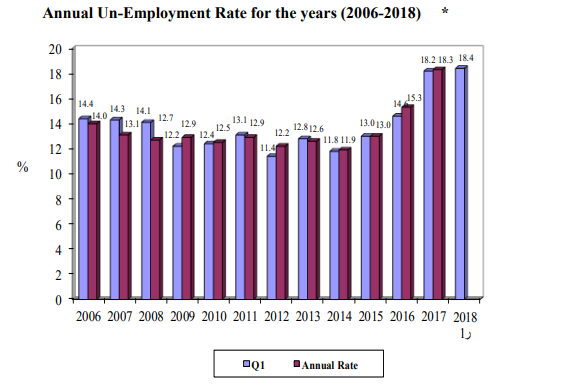 Moreover, inflation has also doubled since 2006 raising the cost of everyday goods and other basic commodities. Jordan’s capital, Amman, has become the most expensive city in the Middle East and 28th worldwide.

There are 657,628 Syrian refugees in Jordan, as per UNHCR report released in February 22, 2018.  Initially, the Government of Jordan benefited politically from the inflow of refugees and provided 46,000 work permits to the Syrian refugees in 2017.

Jordan’s budget deficit has remained huge. It has been relying upon foreign aid provided by the Gulf Corporation Council (GCC) and IMF. Jordan received a $723 million loan from the IMF in 2016, and a $3.6 billion from GCC on annual basis till 2017. However since then, this assistance programme has not been renewed. That is why Jordan has to implement a tax rise of between 50 to 100 per cent on key food staples such as bread, in a bid to decrease its $700 million budget deficit. Now, Jordan’s current debt has reached close to $40 billion.

On June 10, 2018 Saudi Arabia called for a regional summit to discuss ongoing economic crisis in Jordan. It is expected that the Saudi King may push its Gulf allies to renew their previous financial grant agreement with Jordan. On the other hand, Jordanian king Abdullah II hopes the summit will provide Jordan with an immediate cash infusion to help it offset the current budget deficit, amounting to about $700 million. However, Jordanian public did not welcome this summit. According to them, foreign aid is not going to solve the kingdom’s economic plight, nor will it achieve social justice. Rather, they are looking for system overhaul and social change.

Analysts seem to have varying opinion on who can be blamed for this crisis. Some are of the view that decades-long corruption, mismanagement and excessive influx of refugees have caused the crises instead of IMF-backed measures. Imposition of a new income tax and price hikes have added more fuel to the fire. Whereas some others believe that Jordan is paying the price for not recognizing Jerusalem as Israel’s capital. Earlier, Jordan criticized US President Donald Trump’s decision to move the US embassy from Tel Aviv to Jerusalem and sided with the Palestinians.

We can sum up by saying that the ongoing demonstrations have an ability to challenge the Kingdom’s status quo if it is not dealt wisely and left unaddressed. There is dire need to adopt pro-people policies that would aim and focus on country’s economic growth in order to address the grievances of Jordan’s people.

is completing her M.Phil in Strategic Studies from the National Defence University, Islamabad.