On 5 May 2021, the Appointments Committee of the Cabinet (ACC) led by Prime Minister Narendra Modi formally approved the appointment of an Additional Secretary and three Joint Secretaries (Army, Air and Navy) in the Department of Military Affairs (DMA), the body chaired by India’s first and incumbent Chief of Defence Staff (CDS) General Bipin Rawat. Prior to this, the three Joint Secretaries had been performing their duties in officiating capacity.

Indian media reports and information sourced from the website of India’s Ministry of Defence indicate that the DMA will be led by CDS and VCDS alongside an Additional Secretary with two independent Directors, five Joint Secretaries (three uniformed and two civilian officers), 13 Deputy Secretaries, 25 Under Secretaries, 22 Section Officers and a support staff of around 100 people. 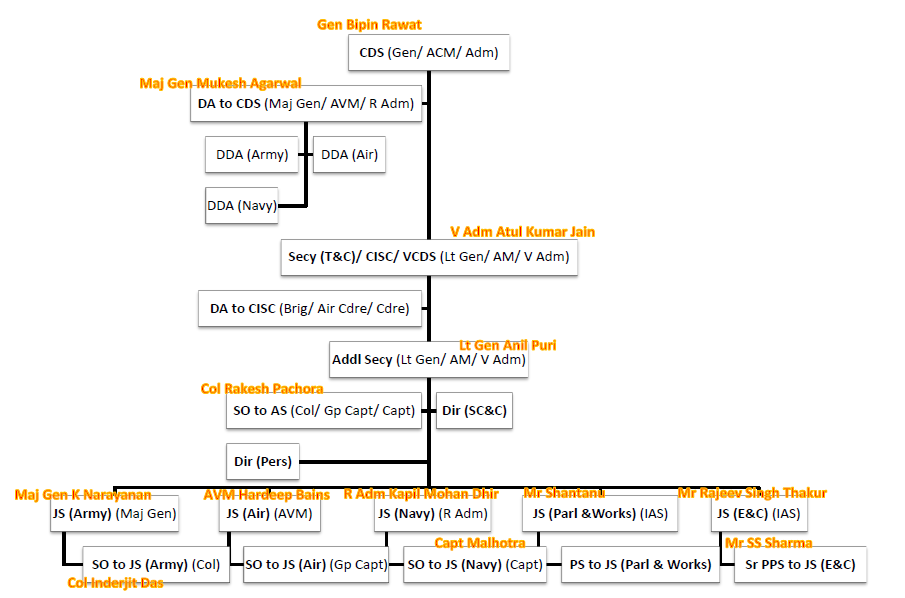 Author’s assessment of the leadership hierarchy in India’s DMA. The image is copyrighted.

With these developments, the burden of file-sharing on General Rawat will be significantly reduced and transferred to his subordinate staff. Moreover, the liaison between DMA and Headquarters Integrated Defence Staff (HQ IDS) will provide clearly defined mandates and correspondence channels.

He possesses vast service experience in the east, having served as the Flag Officer Commanding-in-Chief (FOC-in-C) of Eastern Naval Command, Chief of Staff and FOC of Eastern Fleet. Moreover, this is his second functional association with HQ IDS, having served previously as Deputy Chief of Integrated Defence Staff – Policy Planning and Force Development [DCIDS (PP&FD)]. Other prominent past appointments include Director Naval Intelligence (Protocol), Director Foreign Liaison and Principal Director (Staff Requirement) at the Ministry of Defence.

Lt Gen Puri has served twice in the Southern Command, as General Officer Commanding (GOC) of the 12 Corps/Konark Corps and earlier as GOC of 11 Infantry Division/Golden Katar Division, which also happens to be an under-command formation of Konark Corps. His other prominent past employments include Director General Operational Logistics and Strategic Moves [DG (OL & SM)] at Army Headquarters and Deputy Director-General Financial Planning (Alpha) in the Ministry of Defence.

It merits attention that Konark Corps’ under-command formations include the 340 Independent Mechanised Brigade that is trained and authorised for amphibious assault operations on foreign soil. Lt Gen Puri succeeded Lt Gen Taranjit Singh, who played a fundamental role in the initial setting-up of DMA after its functional setup in January 2020.

He was appointed last year, quoted in the media as the de facto spokesperson of the CDS. In 2018, as a Brigadier, Mukesh Aggarwal was part of the then Chief of Army Staff General Rawat’s defence-cum-diplomatic entourage to Sri Lanka. His continued association suggests he may have been handpicked by General Rawat. Earlier, he served as Commander of 8 Mountain Artillery Brigade in Kargil.

This is Major General Narayanan’s second functional association with HQ IDS, as he previously served there as Assistant Chief of Integrated Defence Staff – Information & Communications Technology [ACIDS (ICT)]. Earlier, he was GOC of 29 Infantry Division, also known as “Gurj” and “Silver Mace” Division under Western Command.

He was appointed last year. Air Vice-Marshal Bains was awarded commendation cards by the Chief of the Air Staff on multiple occasions for his services. He was a flying instructor with a “Category A” rating with experience flying MiG-21s, MiG-23 and Jaguar aircraft, to name a few. He was later Air Officer Commanding of Hakimpet Air Force Station, part of the Indian Air Force’s Training Command.

The policy input by Indian Air Force (IAF), thus far, appears low and could help explain the simmering concerns within the service about shifting toward theatre commands. With a mandate to ensure theaterisation before the end of his term, there is a lot on the CDS’ plate to manage.

He was appointed last year. Rear Admiral Dhir has recurring staff experience pertaining to naval special operations, having served in the past as Principal Director (Diving & Special Operations) at the Ministry of Defence and Director (Diving & Undersea Naval Operations) at Naval Headquarters. This is his second functional association with HQ IDS, as before this appointment, he was Assistant Chief of Integrated Defence Staff – Policy Planning & Force Development [ACIDS (PP & FD)]. His other prominent past appointments include Chief of Staff to Flag Officer Sea Training (FOST).

He was appointed last year. He is a graduate in Civil Engineering with distinction from the University of Roorkee, lending him the relevant technical experience to complement his administrative career. He was posted at the Ministry of Home Affairs twice (as Deputy Secretary and Director/Under Secretary). He has extensive service experience in Tripura, the north-eastern Indian state bordering Bangladesh; in fact, he was appointed to the Indian Administrative Service (IAS) in the Tripura cadre. Prior to his current appointment, he served as Joint Secretary in the Department of Defence Production within the Ministry of Defence for almost a year.

He was appointed last year. He served for almost 17 years in Rajasthan state, the cadre from which he was recruited to IAS. His postings at the Centre (New Delhi) include Ministries of Rural Development, Road Transport & Highways and Power, to name a few. Before his current appointment, he served for almost three years as Joint Secretary at the Department of Defence within the Ministry of Defence.

Observations of the DMA’s evolving organisational structure indicate a general tendency for administrative dominance by the Indian Army, followed by the Indian Navy. Traditionally, both services have maintained a suitable level of inter-service cooperation, especially on matters pertaining to amphibious warfare. The policy input by Indian Air Force (IAF), thus far, appears low and could help explain the simmering concerns within the service about shifting toward theatre commands. With a mandate to ensure theaterisation before the end of his term, there is a lot on the CDS’ plate to manage.

In this context, the continued appointment of IAF officers over India’s strategic forces might be an accommodating arrangement. While the Government of India insists that the CDS would be appointed on rotation from the tri-services, the Indian Army is unlikely to cede space for the VCDS slot. Till General Rawat’s term end in 2023, it will be interesting to observe if the next VCDS (in 2022) is appointed from the IAF.