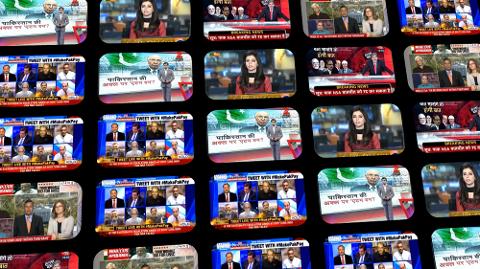 All too often, television is what determines what is a crisis. James Baker

Conventional understanding of foreign policy is usually limited to the state and the type of government of that particular state. In the study of international political community (International Relations), states play the role of actors; each of which is driven by a particular approach towards other nations. Foreign policy articulates a government’s strategy of interacting with fellow states to comply with the accords of global laws. In the anarchic system of world politics, countries base their decisions upon their set national interests. These national interests ensure the survival of the state and are determined by those in-charge but also depend on the “powerfulness “of the state in international politics.

Apart from the obvious incentives that drive a certain state’s foreign policy other behind the curtain factors are often not taken into consideration while discussing a country and its foreign policy. But as argued by political theorists, the states are not the ones with interests but only the “moral agents” have interest, hence the foreign policy of a state is determined by the ruling and a more-dominate moral agent. Moral agents can vary from state to state. Rise in global security concerns has revamped all related industries mainly the weapons industry; marking it as one of the unusual moral agent. Categorized as the fourth pillar of the state – the media is the second active moral agent. Weapons industry provides weapons for defense and the media identifies those from whom a state and its military should seek “defence”.

The interplay between the media, war and foreign policy of state does not take place in a test tube but rather in an open breeding ground. The pawns in this interplay as per the chessboard assessment are hierarchically placed – the military’s might, the economic capability and lastly the exertion of influence through a state’s prestige. Understandably, the state’s prestige is proportional to its “hard power” which is exercised in an environment where behind the curtain players like media and the 24/7 circulation of news becomes a pressing agent on the pawns. After the agenda is set, the “coloring” to the bigger picture of the state’s functioning i.e. its foreign policy begins.

Media is the market of information, making media the main trader of information in any country. A state requires the assistance of media to project its image in the international political arena. States fight for limelight on the international stage; their international prestige in the anarchic structure of the world variably depends upon a successful “manufactured consent” that resonates internationally as well as nationally, ultimately creating a reasonable foreign policy of the country. The media as a free entity crosses over to and fro between state and international audience in the form of a non-human diplomat. Media acts as the right hand man of the state when its foreign policy is being formulated. A state as an independent institute with all its due rationale, rigidly and clearly lays out its policy of dealing with certain states, but for other states, the foreign policy is based on the “information” given or played by the right hand man; its media.

The hard, the soft, the smart-power:

Nothing is as direct and as clear as the hard power of a state. Powerful states maintain powerful military and international presence in IGOs, although to counter the hard power, states resort to Mutually Assured Destruction (MAD) which follows after failure of diplomatic course. The soft power however, is maintained by the media. The sovereignty of Pakistan is maintained by the use of hard power. Since the media is a free market of information and a trader, the foes invest in media for long term and subtle agenda setting. “Hollywood” and “Bollywood” effects are largely in play, hampering and damaging Pakistan’s national security. Violation over Line of Control (LoC) that killed civilians in Pakistan; later claims of surgical strikes inside Pakistan caused an uproar on civil and political front within the country. A timely ban was placed on Indian content and films across Pakistan but soon was lifted as the “Bollywood effect” is a source of income for many. When the movies like “Waar” and “Operation 021” were rejected by the local audience, the impact of Bollywood both on the mindset of locals and political front became obvious, hence any harsh response by Pakistan on matters like LoC or even Kashmir was a heated debate.

Realist tendencies by Pakistan allow Pakistan to maintain the buildup of its defense capabilities while liberal/semi-liberal tend to use the benefit of soft power to slowly poison the socio-political mindset. Raheel Sharif’s talk in the World Economic Forum was another recent boiling point for many within the media as well as the advocates of free speech. Apart from the mainstream media, the social media has become another platform of soft-power, which was countered by launching a report campaign. Twitter accounts of many pro-Pakistan organizations and individuals were suspended due to open pointing out of the enemies and facts that countered the false propaganda, validating Nye’s remarks about soft-power that “it is not necessarily better to twist minds than to twist arms”.  Soft-power is slow seduction that can trick a change in behavior of a state without direct confrontation. Hard-power is honest, soft-power is a Satan’s whisper and is also cost free unlike hard-power which is expensive both economically and politically.

But when actually the media drives a state to direct conflict? Advocates of liberalism, who argue that democratic states do not engage in war with each other, largely undermine the moral agents and their influence to forge foreign invasion and covert war proxies. The Democratic Peace Theory has not been effective in stopping conflicts in the world. Realists hence argue the concept of hard-power to ensure ultimate survival of the state. Since media is an agent of liberal thoughts and freedom of expression and information, it points to the argument that the gap is filled by those against a state’s national and security interests. Media in Pakistan is mostly hyper and typically fails to understand the silent role they play in wounding national security interests. What the media cites and chants is its right to hold state and its policies accountable, and freedom to access sensitive information for the sake of the public at large. But the public at larger demands security, which cannot be given if their messenger plays the role of the assassin to the very policy and other measures to counter security threats.

The symmetry of warfare is a complex puzzle which involves numerous tactics that are active even in peace time situations. Nuclear capabilities attained by any state (democratic or non-democratic) flex to the concept of MAD which is very obvious in the international politics today, but states appoint and seed other assets that are active throughout the state. Use of arms and weaponry build-up by Pakistan has been questioned by many including those in the media with some even suggesting total nuclear disarmament including the staged assets by the state. Media, by providing such lobbyists the platform, twist state’s policy on national security. Since Pakistan has maintained a realistic tilt in its approach towards national security, the liberals unpleasantly argue the use of such assets and nuclear weapons through the use of their soft-power which is infected by various foes. In a world where conflicts and covert proxy wars are leading many to argue third world war situations, Pakistan cannot afford to let down its guards and the state has the right to ensure by many means (use of assets and nuclear deterrence) to strategically glide through opposed security risks.

Media thrives on “information” “news” and “action”. Globalization of politics has made international news more commercially benefiting to media than local politics. International organizations and MAD have deterred and perhaps even limited full scale wars between states but media creates “misinformation” and plays it long enough to take a country to war. Wars create more news and also keep states engaged internationally. The case of Syria, Libya and Iraq can be cited as examples. Lastly , the smart-power is the perfect balance of hard and soft- power and is more important in matters of international politics and if understood can be practiced by Pakistan to reap the maximum benefits. Foreign policy is the outcome of a state’s thinking which is mostly done by the moral agents.  Adding media to the equation of war and foreign policy makes the matter complex .The interplay between the states to the naked eye seem to be the actions of statesmen but even the statesmen are under the spell of the media.  Cohen suggested that the media controls what people think about in today’s world. It can be presumed that media controls what states think about which leads to how a state reacts (i.e. composes its foreign policy).  The media-led phenomena becomes a concern for the military when the disclosure by the media causes a terrible twist in the state’s plot and threatens its survival.

Media initially was a need of the hour but over the years the media has transformed itself as an active catalyst that can alter the environment in and around it. The evolution of media has affected the variables which the involved player needs to take under contestation before forming any policy, hence covertly impacting the foreign policy of a country.

has done her Bachelor’s in Mass Communications and Political Science from Forman Christian College. She was previously associated with U.S Undergraduate Student Exchange Program. During the course of her degree she focused on the emerging media and foreign policy theories. She tweets @MsAishaK