Although the official term “panda diplomacy” was first coined during the Cold War, it dates back to the Tang Dynasty when the first official “panda deal” was conducted. In modern times, panda diplomacy was carried out in 1941 when China gifted Pan-Dee and Pan-Dah to the United States (US) as a gesture of appreciation for providing aid against the Japanese. For decades, China has been engaging in panda diplomacy to promote its soft image as a reformed nation that can rise peacefully like the giant panda, native to the country. But, under the guise of helping the panda species, these efforts of China have proven harmful for the giant panda.

Although China has been gifting its pandas to its chosen countries, the practice was not as common as it is now. It was Chairman Mao who revived the tradition of giving pandas to China’s allies. This policy, however, came to an end in 1982 when pandas became an endangered species.

China began the new policy of “loaning” out pandas to other countries. In 1996, the San Diego Zoo asked for a pair of pandas on the basis of a “research loan’” for 12 years. They paid China $1 million, which fulfilled China’s need to capitalise on pandas and pacified conservationists who claimed that pandas were being exploited for profit.

In 2013, Cui Tiankai, China’s ambassador to the US wrote in the Washington Post, “There are actually two Chinese ambassadors in Washington: me and the panda cub at the national zoo.” Besides, an Oxford University study in 2013 stated that these “panda loans” have coincided with significant trade deals and symbolised China’s “seal of approval”. China denies this; still, the timings of these “panda loans” correspond with its major economic deals.

Countries like Canada, Australia, and France received panda ambassadors from China soon after selling uranium and nuclear equipment to China. Scotland also received a pair of pandas when it decided upon China’s deal. It is estimated that this deal was worth nearly $4 billion.

China has also used its pandas to express its displeasure with certain countries. China warned the US not to acknowledge the Dalai Lama. President Obama went against this, and as a result, China decided to take Tai Shan back from the US. Similarly, the 2014 flight MH370, which disappeared, carried almost 150 Chinese citizens. China was displeased with how Malaysia had conducted the investigation. A pair of pandas set to arrive at the Kuala Lumpur Zoo was delayed for a month, to show China’s displeasure.

In 2015, only 12 countries were hosting the giant panda, but the number of pandas outside China has seen an increase since then. Currently, the standard contract of hosting a panda is $1 million per pair, and 70% of this money must go towards the conservation projects for pandas. As reported by Jamil Anderlini, any offspring of the pandas belong to China and any biological material from the body; fur, blood, and semen, is also China’s property. 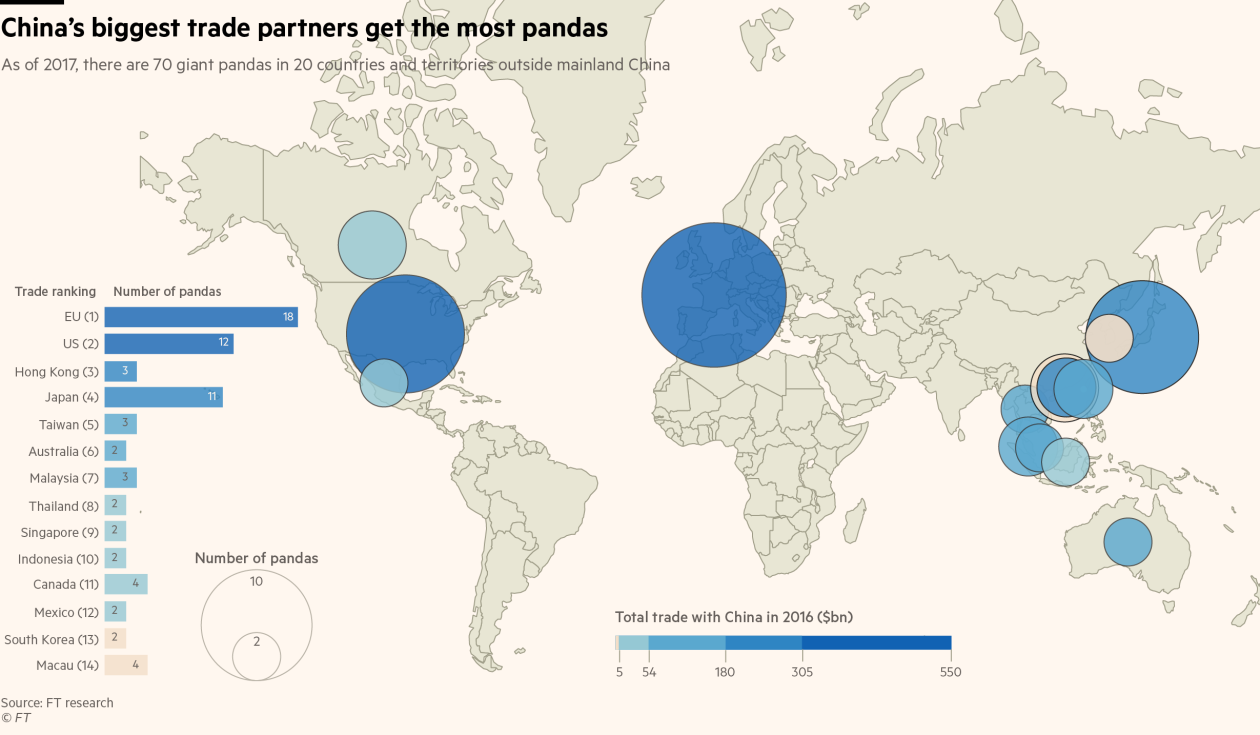 For China, the giant panda is a breathing, national treasure, representing China’s ancient culture and compassionate nature. “Far more money, time and effort has been spent on saving the giant panda from extinction than on any other animal.[sic]” The logo of the international non-governmental organisation, World Wide Fund for Nature (WWF), is inspired by the panda Chi-Chi.

Giant Pandas continued to be an endangered species as per the International Union for Conservation’s (IUCN) list since 1990. But in 2016, the IUCN announced that the giant pandas were not an endangered species anymore. They were moved from the “endangered” list to the “vulnerable to extinction” list. The change caused outrage in China, and since 2016 they have been attempting to reverse the decision. Later, in 2017, Meng Meng and Jiao Qing arrived in Germany as a loan for 15 years.

Nevertheless, the IUCN’s decision of 2016 was based on the official data provided by the Chinese government. It depicted a steady rise in the panda population as represented in the graph below. 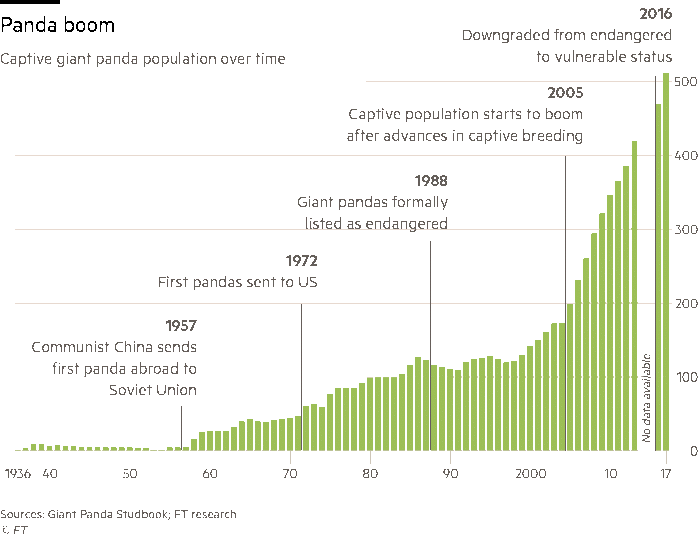 Raising these pandas in captivity hinders their capabilities to survive in the wild while making them the perfect ambassadors for China. The growth in their population provides China with more pandas to send as emissaries so that President Xi can enhance China’s soft power.

Pandas might appear to be the luckiest animal on the planet with the amount of money and effort which goes into their conservation, but they are rather unlucky at the same time. According to Wang Dajung, an expert on wild pandas at the Peking University, “Humans want to protect pandas, not for scientific reasons, or because they are ecologically important, but because they have cute faces and they are politically important.”  More than the “cute faces,” it is their political importance which grants them such protection.

China’s panda breeding facilities produce more pandas than required and have doubled the panda population in less than a decade. Such a large number of pandas is not needed to sustain genetic diversity. These cubs are raised by humans in medical facilities, giving them a higher chance of survival. Captive pandas do not possess the necessary skill to survive in the wild if released. Experts agree that there is no scientific justification behind breeding so many pandas if they cannot be released into the wild.

Pandas in the wild are not very profitable for the Chinese government and are considered a wasted resource as they cannot be exploited. Unlike the docile and human-friendly pandas raised in captivity and portrayed next to the world leaders, the wild pandas are aggressive and rarely seen by tourists. And they certainly do not make for good ambassadors of China. Even the locals of China do not care much for the pandas in the wild because they think there are already enough pandas to look at in the zoos.

However, the practice of using animals as diplomatic gifts is not exclusive to China. Other countries also gift animals as a sign of good relations. The government of Mongolia has a custom of gifting its horses to the visiting dignitaries. The Philippines recently loaned a pair of its Philippine eagles to Singapore. But none have managed to capitalise on this like China particularly since the giant panda is only native to China.

Experts agree that there is no scientific justification behind breeding so many pandas if they cannot be released into the wild.

People who favour panda diplomacy, mainly China itself, continue to promote the narrative that the money taken to loan out pandas is being put towards conservation efforts for the giant panda in China. But those results are not seen clearly till now and are therefore raising concerns.

Countries are now unwilling to take even “panda loans,” as they present an ostentatious expense to the host country. The conservation benefits have steadily been creating doubts for a long time. There are many pandas on loan outside China but still not as many as China wants. This unwillingness to host China’s pandas so that China can exercise its soft power is putting the country in a difficult place.

If China cannot loan out its pandas to other countries, it is left with docile, hand-reared pandas, with no survival skills that cannot be released back into the wilderness. This will not help China’s soft image, particularly when the country wants to show the world that it is a peaceful rising power. It is also why China is eager to give out “panda loans”. But the high costs make the hosting of the giant panda taxing on the zoos, making them seem like an expense not worth the hassle to even countries hosting or have hosted them.

If these pandas cannot be employed as a diplomatic tool for China, they are not of much use. It creates apprehensions about how China would treat them as the country has already shown it is not interested in conservation efforts for the lesser political animals. In case the giant panda cannot be used as an ambassador anymore, China will be forced to own up to the fact, stated by the conservationists from the start that it has damaged the survival chances of an entire species for nothing.

Zoha Fatima is pursuing her BS in International Relations from National Defence University, Islamabad. Her areas of interest include politics of environment, diplomacy, and space security.