By next year, China aims to have the capability to track the social behaviour of its 1.4 billion population under a complex infrastructure of social credit systems (SCS) through modern data technology, which has been described as ‘Orwellian’, ‘dystopia nightmare’ and real-life example of a similar system depicted in science fiction anthology TV show Black Mirror. Under this infrastructure, every Chinese resident will be allotted a specific credit score based on their actions combining both personal and publically available information about them. In other words, the systems will be the basis upon which individuals will be either rewarded or punished. High scoring individuals will able to access several facilities including getting discounts on energy bills, rent things without deposits, getting better interest rates at banks, etc. whereas low scoring individuals will not be able to enjoy many facilities and their movement will be mostly restrained. This article discusses the SCS infrastructure, its major loopholes and areas of concerns and future implications of SCS on the Chinese society.

By next year, China aims to have the capability to track the social behaviour of its 1.4 billion population under a complex infrastructure of social credit systems (SCS) through modern data technology, which has been described as ‘Orwellian’, ‘dystopia nightmare’ and real-life example of a similar system depicted in science fiction anthology TV show Black Mirror.

Since 1950s, scientific concepts from system engineering were incorporated into the Chinese sphere of governance and gave birth to the notion of Communist Party-designed social management. In this regard, Dang’an (files / records) system started operating in 1953 under which personal and professional information was stored about every worker excluding higher cadres and some farmers in the form of a file. Fast forward to 2014, the government released a document in which the establishment and the advancement plan outline of a national SCS was introduced and was to be achieved by 2020.

Currently, the SCS infrastructure is divided into four main kinds which emerge from the two approaches which have been explained as follows. The first approach views SCS as infrastructure for economic and financial activities and includes the nationwide governmental financial credit system by the People’s Bank of China and commercial credit score and rating systems by private corporations. The second approach views SCS as a tool for social governance and includes nationwide governmental blacklist/redlists by National Development and Reform Commission and municipal governmental SCS. 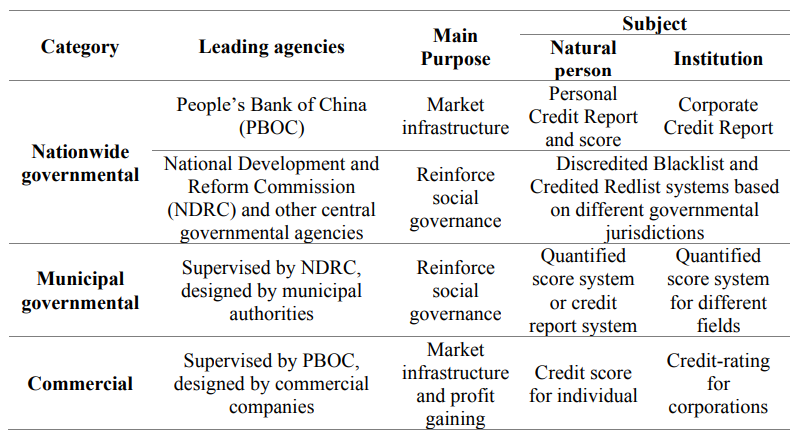 The extensive SCS infrastructure is not necessarily interconnected. Majority of the nationwide governmental SCS are controlled separately by different central government agencies. The linkage among more than 20 various governmental municipal SCS is more complicated due to diverse situations and metrics. Similarly, no commonality is found among commercial SCS. Before Baihang Credit was established, each commercial SCS only used their own data and public records with self-designed models.

Table 2 – Relationships among SCS for natural persons in China 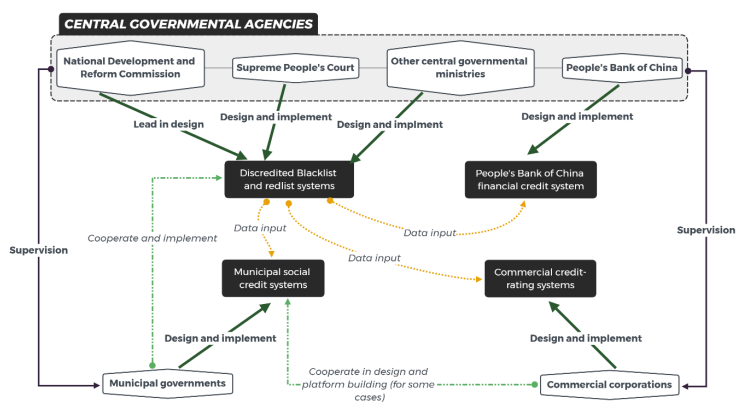 Source: Relationships among SCS for natural persons in China (Liu, 2019)

By introducing SCS, the Chinese government aims to achieve the following four objectives:

Additionally, Chinese leaders believe that the introduction of SCS is to convince the public that government decision-making is based on data analysis, thus enhancing the public trust of the government to regulate corporate and private behaviour.

According to some, SCS will improve transparency, resolve transaction disputes between enterprises and regulate people’s social behaviour to improve the overall efficiency and equity. However, basic questions about the SCS like principles on which the infrastructure will operate remain unanswered which raises questions about whether fundamental human rights like right to privacy and right to expression will be protected under this infrastructure and will not influence the credit scoring criteria.

The failure to integrate the SCS in the existing legal framework is another major area of concern. Several impediments including the lack of clear definition of ‘trust’, vagueness about untrustworthy behaviour, transparency issues and how to impose punishments has blocked the integration of SCS in the legal framework.

The SCS infrastructure is predicted to exacerbate the income and social inequalities because high and middle income citizens and those of advantaged backgrounds will be generally considered as more trustworthy and will be in a better place to prove themselves as ‘model citizens’. Additionally, poorest segments of the population will not be able to cherish the benefits derived from the system as they will be in a disadvantageous position due to shortage of resources to excel. Citizens will undergo behavioral and personality change fearing that they are being surveilled everywhere and every time. It will ultimately lead towards the erosion of concept of private spaces in the country.

Rating human behaviour through complex and non-transparent structure of SCS will not prove effective in achieving the stated objectives of Chinese government. Any such infrastructure which is devoid of fundamental human rights will not be substantial in the longer run and might be the cause of instability in the country by instigating people to resist the formation of a dystopian state by adopting measures which will enable them to survive in such a society and mobilize others against the state. Modern data technology should always be an enabler for betterment of society rather than determining factor of what should be an ideal state.

Fahad Nabeel is an independent researcher, and he tweets @fahadnabeelfn