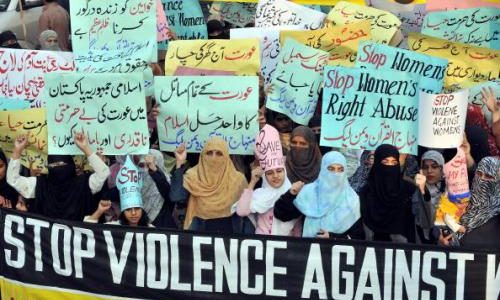 ‘Honor’ – an undefined concept in a patriarchal society – has long been used to justify the criminality of murder. Women are considered as the most oppressed group in the Pakistani society. Almost every day there are stories in newspapers reporting horrible crimes against women, such as acid throwing, Vani, domestic violence, child marriages, bride burning, rape, human trafficking, and even killing in the name of honor.

Women emancipation corresponds to complete independence of women to exercise her free will. This becomes a reality only when women are liberated from the shackles of the patriarchal society. What resist this emancipation are the myopic customs and traditions which are basically the bedrock of this male-controlled society. Therefore most of the crimes have been committed against women in the name of customs. In a society such as Pakistan, honor killing is a cultural reality where women are killed for tarnishing the family’s honor. Many killings have been committed against women who marry against their family wishes after exercising their ‘inherent’ right to choose. Not only this, women are also brutally murdered by their family members on issues such as seeking education, separation from an abusive husband, property related issues, vengeance for rejection or insult, and extra-marital affairs. These customs and traditions become more violent in tribal societies where male-dominated informal mechanisms of dispute resolutions are still intact. As a matter of fact, in the tribal areas of Pakistan where such practices are not even recognized as crimes, honor killing is a punishment for those who break the tribal codes. Majority of the victims in these cases are women and the punishment meted out against the perpetrators of this violent act is very lenient.

Honor killings are one of the most psychologically complex, legally challenging and socially distressing crimes against humanity. Reports of women being burned to death, stoned, stabbed, electrocuted and strangled to death are as barbaric as they are shameful. It is however hard to get true statistics on these incidents since the acts are usually concealed by the family elders, and so they rarely make it to the formal justice system of the country.  Surprisingly, the accused male or offender is often pardoned by the family elders for committing the horrific act since he has acted just to protect the family’s honor.

Each and every case that makes through the headlines proves that the issue of honor killing cannot be eliminated until the loopholes in the law are plugged to punish the offenders for their heinous acts. Under the formal Pakistani legal system, honor killing is defined as ‘a murder committed in the name of honor’. Before 1990, honor killing was a non-compoundable offense, but it was later made compoundable in view of the opinion of religious scholars and recommendations of Council of Islamic Ideology. The interpretation is that Islam allows a compromise in murder cases. Murder laws in Pakistan are adjudicated according to the criminal laws of Qisas and Diyat, which entails that the victim or his/her legal heirs retain control over the matter including the crime and criminal. They may choose to report the crime and prosecute the criminals or they may agree to a compromise according to the law. Minimum penalty for honor killing has been laid down to be 10 years (or a maximum of 14 years) when awarding of the penalty has been left at the discretion of the court where the right of Qisas has been waived. This however proves to be a major loophole for the offenders to get away with minimum or no penalty. This lenient punishment amounts to infringement of constitutional rights of women, which the state is obliged to guarantee under all circumstances irrespective of the gender. Legal practitioners are of the view that though the amendment made to the Pakistan Penal Code (PPC) and the Criminal Procedure Code (CrCP) in 2004, which declared honor killings as murder, the existing laws leave ample space for judicial gender biases to intervene and result in lenient sentences to murder, and to make room for compromises which allow the perpetrators to get away from the crime after minimal or no penalties. This in turn dodges the entire process to effectively deal with the issue of honor killings. To add more, women in Pakistan are generally unaware of not only their basic human and legal rights, but also the entire process and mechanisms they could access for their protection and wellbeing. The impunity with which the perpetrators commit the crime certainly makes the state accountable under national and international law.

The complex nature and causes of honor killing makes it harder to be addressed, however steps have to be taken from where it is socially acceptable. Reshaping what the society perceives as ‘honour’ is something critically required in this battle against honor killing. Naming and shaming the perpetrators of violence and bringing them to scrutiny are crucially important. Accountability of state for not effectively implementing the law should also be brought under the ambit of collective shaming to make government heedful of its responsibilities. Time and again women rights organizations have stressed that the state must act as a guardian in all such cases to prevent women from being murdered in the name of honor, thereby effectively turning the matter into a private wrong rather than a crime against the state. There is a need to exclude partial defense in terms of provisions of Qisas and Diyat laws, plea of grave and sudden provocation and cultural norms which are routinely accepted by court in cases of honor killing.

Given the importance of religion in Pakistani society and its constitution, it is equally important to iterate its teachings in true perspective. Islam in no way tolerates honor killing and violence against women to protect a family’s honor has not been recommended by Islam as just. The practice instead stems from socially constructed notions of patriarchy. Likewise, misogyny is an issue prevalent not only in Pakistan but it is a global nuisance which exhibits its worst form through honor killing. Fight against this irritant shall continue along with massive attitudinal transformations towards women. Civil society, media and other important stakeholders must challenge elements and cultural dogmas which deny women their basic human rights.

Honor killing in Pakistan results as an interplay of cultural practices and inadequate judicial administration which protects the abettor. Under such circumstances there is no doubt that struggle for women rights is to be waged on several fronts with agenda to transform connections between societal norms and gender. It is to be realized that honor is upheld by respecting lives and not taking them.

is a Career Diplomat (44th Common) at Ministry of Foreign Affairs Pakistan.