The New York Times recently published exclusive excerpts from the draft of a strategic accord between China and Iran, which if approved by the latter’s parliament, would see Beijing invest almost $400 billion into different sectors in Iran. In exchange for this monolithic investment, Iran would ensure that China receives discounted supply of oil for 25 years.

A few commentators in South Asia and the West are declaring this investment a ‘game changer’ for Beijing. However, the dynamics at play are much more complicated than what they appear to be. Even if the draft is passed by the Iranian lawmakers, there are many challenges lying ahead for China to yield any ‘strategic’ benefits from these investments except receiving cheap oil supplies.

At the ministerial level, China dubbed Iran a “strategic partner” in 2014 during a meeting between the then Chinese Defence Minister General Chang Wanquan and his Iranian counterpart Brigadier General Hossein Dehqan. However, it was not until 2016 that the foundation of a proper strategic partnership was laid out.

The Chinese President Xi Jinping first touched down in Riyadh on 19 January 2016 for talks with King Salman bin AbdulAziz Al Saud where both leaders announced the establishment of a China-Saudi Arabia ‘comprehensive strategic partnership.’ Xi then visited Tehran a few days later on 22 January to meet President Hassan Rouhani and sign a similar agreement based on mutual comprehensive strategic partnership. The full text of the agreement with Iran mentioned: “concluding a bilateral 25-year Comprehensive Cooperation Agreement on their agendas,” which we now know kept lingering and was never concluded.

While China has been protective of Iran in the international community, Xi opted to visit Riyadh first as a signal of his commitment toward improving relations with the Kingdom. The Gulf Cooperation Council (GCC) countries have been particularly uneasy with China’s growing fondness for Iran in terms of infrastructure and connectivity projects, especially since the Arab leaders experienced an ‘about-turn’ by the Obama administration. There is evidence of the fact that the “25-year partnership” ambition outlined in 2016 kept lingering for years, prompting the Iranian Foreign Minister Javad Zarif to lead a delegation to Beijing in August 2019, so that the matter does not die down.

It is evident from these back-and-forth visits that Iran and China spent considerable time trying to weed out mutual apprehensions of the partnership agreement. After four years, this ambitious project continues to flash headlines, while in fact it has made little substantive progress on paper.

Trade data reveals that Saudi Arabia remains the largest supplier of oil to China. In 2019, the Chinese oil import from Saudi Arabia increased from 0.5 million to 1.7 million barrels per day, or by 16%. Iran does not figure in the top three suppliers and the sanctions on Iran in 2019 further worsened the prospects of Tehran securing a sizable stake in China’s oil markets.

A comparative analysis of Chinese investments from 2016 onward reveals that Saudi Arabia received almost $14 billion, whereas, Iran received $10.37 billion. Investments into Saudi Arabia were initially lower than Iran but fairly regular, but almost tripled during the period in which Iran was experiencing sanctions. 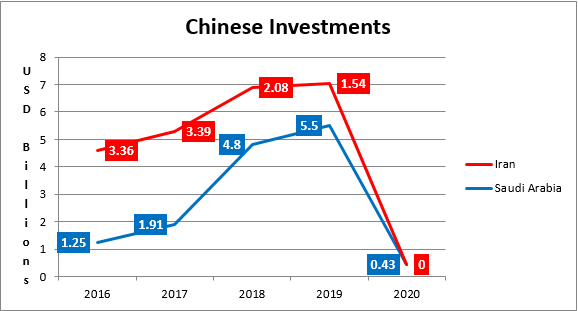 Plotted by Author. Data Source: American Enterprise Institute’s China Global Investment Tracker. Data for Year 2020 is as of May only.

A pragmatic analysis by Ofira Seliktar and Farhad Rezaei proffer that a “mystery clause” in the 25-Year Partnership roadmap is creating issues of ‘sovereignty violations’ (quoting Iranian President Mahmoud Ahmadinejad). Reportedly, Beijing will ensure that Tehran does not misuse revenue from this agreement to promote its destabilising regional policies through the IRGC Quds Force. Seliktar and Rezaei rightly argue that even if there are ‘hidden’ conditions in a China-Iran agreement, the IRGC would in all probability fail to oblige.

For Tehran, continued involvement in the affairs of Syria, Lebanon, Iraq and Yemen are the bedrock of its strategy to maintain regional dominance for its own political-economic interests, while also fulfilling Russia’s larger Eurasian game-plan in which Iran is the gateway to the Indian Ocean, and Syria serves as a critical node in the Mediterranean.

Despite growing bonhomie and a joint “comprehensive strategic partnership of coordination in the new era,” Russia and China’s regional ambitions diverge at various points. For example, despite being discreetly supportive of Assad regime in Syria, China is not militarily involved against the US as the Russia-Iran duo is. Likewise, despite a potent regional Combined Maritime Task Force in Bahrain, China has preferred to execute standalone counter-piracy operations in the Gulf of Aden.

Chinese presence on Pakistani soil for work on the China-Pakistan Economic Corridor (CPEC) has incurred embarrassment for Islamabad on several occasions because of a few successful targeted attacks by ethno-national militant groups in the Sindh and Balochistan regions. Keeping these factors in perspective, Pakistan Army raised a Special Security Division to protect these workers. In a similar vein, the Pakistan Navy raised Task Force 88 for full-spectrum coastal protection.

Iran would not, and could not, replace Pakistan as the regional hub linking the Belt and Road Initiative with Maritime Silk Route. The long-term security arrangements by Pakistan were put in place after extended consultations with China. Put simply, the People’s Liberation Army does not need Tehran to complement its excellent, historic interoperability with Pakistan Armed Forces.

Chinese boots on the ground in Iran are a dangerous gamble. If groups like Jaish-ul-Adl initiate targeted attacks on Chinese personnel in Iran, it would involve Beijing into a transnational border dispute between Iran and Pakistan which China would find impossible to manage. Military-to-military confidence-building measures between Iran and Pakistan have been fruitless to date and China would never offer itself as a guarantor of peace.

Facts indicate that the risks for China in approving the 25-year accord outweigh those for Iran, pertaining to certain ambiguous clauses. As far as rushing through executive intervention is concerned, past trends suggest that Chinese investments in Iran will be in a phased manner to ensure equilibrium with the GCC states.

The Chinese leadership knows that Russia views Iran just as it views Pakistan. To de-orbit Tehran from Moscow would create an atmosphere of distrust between Xi and Putin in their shared quest for ‘win-win’ cooperation against the ‘collective West.’

Beijing would prefer not to ‘entrench’ itself in Iran as the US in Sri Lanka. It is already involved knee-deep in Pakistan which is a sufficient burden in itself.