Why CPEC matters to the World: Delivering Security through Economic Development 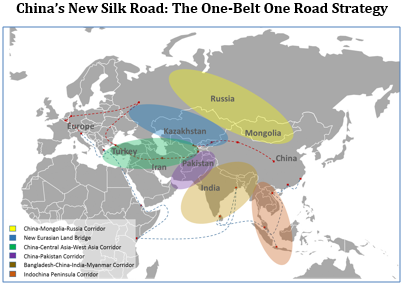 The China-Pakistan Economic Corridor (CPEC) is part development scheme, part strategic gambit. Although the Sino-Pakistani friendship has been labelled as “higher than Himalayas”, perhaps it’s time to refashion it with a greater qualifier: the CPEC represents a watershed moment in the Sino-Pakistani partnership, a reflection of enhanced and deepened bilateral relations. More critically for Pakistan, the CPEC comes at a time of rapidly evolving Chinese geopolitical ambitions, thereby, providing Pakistan a significant role, both economically and diplomatically, in this ambitious expansion.

Right from the start, the CPEC developments are poised to have a global impact, facilitating trade along an overland route that connects China to the Indian Ocean, and reinvigorating state-directed investments in railways, roads, pipelines, ports, and information networks to consolidate economic integration and connectivity across Asia and into Africa and Europe. The CPEC is part of a grandiose Chinese agenda of regional economic connectivity: the ‘One Belt, One Road (OBOR)’ initiative outlined by China’s National Development and Reform Committee (NDRC).

As the figure below illustrates, the OBOR strategy encompasses an ambitious project: a continental Eurasian ‘Silk Road Economic Belt’, a Southeast Asian ‘Maritime Silk Road’ and in the longer term, even an overland link across Pakistan to the Indian Ocean to alleviate the ‘Malacca dilemma’ and ease Beijing’s vulnerability to the fact that around 85% of its oil imports travel through the single chokepoint of the Strait of Malacca (Pakistan’s Gwadar’s proximity to the Persian Gulf means key maritime choke points, save for the Strait of Hormuz, would be effectively bypassed). Islamabad has been hand-picked to potentially serve as a nexus for this singular ‘flagship project’, as Beijing terms it, through the $46 billion CPEC to link northwest China to the Pakistani port-city of Gwadar.

For any global power to understand the CPEC requires an appreciation for China’s geopolitical ambitions  and Pakistan’s economic and security concerns. The CPEC represents a singular international extension of Beijing’s endeavor to deliver security through economic development. As such, there is every reason to imagine the CPEC benefitting other regional and global powers. For instance, take the resulting investments in Pakistan: the consequent job creation, reduction in anti-state sentiments and generation of public resources (possibly directed towards improvements in local law and order) all echo the West’s grander strategy to tackle extremism and bolster the fight against terror. For the US and its NATO allies in Afghanistan as well as Pakistan’s neighboring Iran and even India, this should ring the bells of good fortune. The CPEC ultimately stands to dramatically strengthen Pakistan against terrorist insurgents.

Economic prosperity goes hand-in-hand with national security and political stability. The CPEC needs to be acknowledged as a blissful development by the US. With international participation definitely on the cards (Germany and Iran have already expressed interest), the CPEC represents an opportunity for the US for profound engagement with Islamabad and acquire reasonable profits simultaneously. The new US administration needs to appreciate the CPEC as even a means for trilateral partnership. Immediate benefits for the US could include partially redirecting current civilian assistance funds into CPEC projects (e.g. technical improvements to Pakistan’s national power grid), providing incentives for brisk outside investment, and ensuring CPEC-style protections are also applied to US firms and investors. Such goals will realign the US image in Pakistan as a constructive partner.

Additionally, the CPEC may serve as a convenient contingency plan should the US wish to view it as  complementary rather than competitive to American security efforts. With US troops ultimately withdrawing from Afghanistan, Washington wishes for stable governments in the region to share the fight against terror. Not only does the CPEC bolster Pakistan’s anti-terrorist efforts, it brings in a fresh superpower to play a parallel stabilizing role: China.

Finally, looking at the bigger picture, the CPEC is an opportunity that is likely to be taken by one of two nations eventually: the US or Russia. Who gets there first will be in a position to call the shots vis-à-vis the other. The US will thrust itself significantly ahead should it choose to reach the CPEC in advance. Critically for Washington, the traditional Russian sphere of influence of Central Asia (Kazakhstan, Kyrgyzstan, Tajikistan, Turkmenistan, and Uzbekistan) stands as a potential partner in this Sino-Pak project. As such, ambitious as it sounds, the CPEC can be the defining point for the US to create almost an Eastern Europe-style ‘Iron Curtain’ against Russia in Asia and dominate the CAREC (the Central Asia Regional Economic Cooperation) corridor (an increasingly important energy market for Russia since the Ukraine crisis). The CPEC fits squarely with American objectives to providing the Central Asian bloc a wider set of security and economic relationships. Economic space in Central and South Asia determined by the US (albeit, along with Pakistan and China) whereby fiscal rules and customs tariffs in the heart of Eurasia are shaped in part by Washington, not Kremlin, does make the pie sweeter for the US.

A $46 billion development project is hard to ignore in any part of the globe. Its reverberations were felt in Berlin too as Germany appears eager to acquire a slice of the CPEC pie. The CPEC presents a case for German talent in civil engineering, finance, technical solutions (e.g. infrastructure technology solutions such as harbor development at Gwadar) and local know-how (in energy and infrastructure development projects) to be showcased. German expertise in large infrastructure projects is well-known. Additionally, German diplomats have urged Pakistan to “think out of the box” regarding CPEC, a veiled reference to The Center for Strategic & Contemporary Research – Muhammad Omar Afzaal Pakistan to invite other foreign players into the fray as well. Although, previously risk-averse in Pakistan due to security concerns, now with Pakistan’s promise to build up a 10,000-strong CPEC security force and emboldened by China’s steps in Pakistan, Germany looks keen to sit at the poker table with Beijing and Islamabad.

For Pakistan’s neighbors, Afghanistan and Iran, stakes in the CPEC will not only be high but positive too. Afghani and Iranian investment in the CPEC will be an intelligent and pragmatic geo-strategic move to bring Kabul and Tehran closer to Islamabad. Besides economic prospects, both Kabul and Tehran are presented an opportunity to work with Islamabad against the Taliban and Baloch insurgents.

The Central Asian bloc of Kazakhstan, Kyrgyzstan, Tajikistan, and Turkmenistan, and Uzbekistan is wary of Beijing’s embrace yet prefers it to Russian entreaties. Beijing has long departed from its purely economic stance in the region, stepping up its security engagement and leading diplomatic coordination in Central Asia. The CPEC presents a singular platform for Central Asia to integrate Chinese geopolitical and economic objectives, harnessing the revenues in the process and consolidating the region’s significance for Beijing’s energy supply diversification. In 2014, without the CPEC alone, Chinese trade with Afghanistan, Kazakhstan, Kyrgyzstan, Tajikistan, Turkmenistan, Uzbekistan, and Pakistan was worth around $61 billion. With CPEC, this figure is bound to take a massive hike.

The regional geopolitics (in terms of trade, investment, development, security, and even foreign policy) will shift progressively for Central Asia. The region is poised to be connected to the export market like never before, intensifying its economic activity.

The CPEC constellation doesn’t reflect Pakistan’s propensity for overselling the China card but instead, is  ore reflective of the economic and security profits the world stands to gain. It is a timely premium of Pakistan’s unwavering and successful campaign against militant sanctuaries in the north-west. For the world, the CPEC is an opportunity to transform the region’s economic geography and showcase the ability to project soft power.