A nation’s geography is a significant factor that influences its foreign policy. It is said that a strategically central location can only be advantageous if a country is able to radiate its power. Vassal states become battlefields for various actors to play their stratagem. A country cannot be oblivious to its neighbors, for events on the periphery do create an impact. The nature of ties can be acrimonious or friendly depending on compatibility of vital interests. A partnership survives and thrives if all stakeholders garner advantages. This is a cardinal rule of international relations followed since the very beginning. The Sino-Pak equation is no different. The concept of power and security can be fathomed lucidly if one tries to delve into the reasons of “friendship” between the two countries. Friendship is rather used as euphemism for harmony.

The 65-year old long diplomatic ties have been smooth and mutually beneficial. However, there was apathy and a bit of reticence between the two neighbors. The Sino-Indo border skirmishes in 1962 rekindled American Containment Policy and hence China was deemed as a veritable concern. With a common foe in India, China and Pakistan started off a glorious partnership, firstly by settling their border disputes. Ever since then, China has been an all-weather partner. It has massively supported Pakistan in the diplomatic, military and economic fronts. Pakistan has been a vociferous supporter of the PRC in all its regional and international issues. Pakistan wanted a cushion to counter India amidst an aversion of the United States towards the Pakistani cause. China also needed a supportive neighbor and a peaceful border. The piece does not aim to shed light on the history of linkages between the two countries. This introduction was important to realize that convergence of goals lead to alliances.

6 decades down the line, Pakistan faces the same concerns. Its strategic fraternity still gives primacy to India as a threat. The dealings with the United States are beset with doubts and its economy is fledgling. China on the other hand is a state with ever expanding wherewithal of national power. It is in a position to use and increase its influence. Aspirations of becoming a leading powerhouse in the comity of nations are being backed up by strategic steps.

Hence, both countries have reasons to strengthen their strategic ties. Pakistan needs succor to obviate threats and improve its economic outlook. China needs Pakistan as a conduit to augment its economic power. As a force to reckon with in the international arena, China is flexing its muscles, for instance in the South China Sea.

In pursuance of her economic interests, China took a strategic decision of establishing the China-Pak Economic Corridor (CPEC). This strategic initiative with Pakistan is said to be a game changer. It therefore becomes imperative to dwell on the advantages of this trading route for both countries. Why has China incorporated CPEC as a glaring feature of its latest 5 -year plan? Why has the Pakistan army raised and deputed a hybrid division-sized force for the protection of the corridor? The answer to these two questions will help us discern the nature of this partnership in light of realist theory. A succinct introduce about CPEC is the needful. 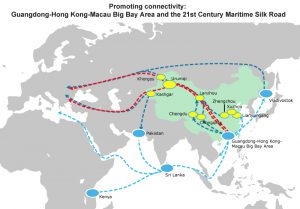 CPEC is a mega project which will connect Pakistan’s Gwadar port with China’s Xinjiang through a web of communication and transportation mechanisms. A costly project, which will take time to complete has the potential make China and Pakistan somewhat indispensable for each other; a formidable entente will pander to the needs of both countries.

The corridor will immensely benefit Pakistan. The establishment of special industrial zones, energy and infrastructural facilities will exceedingly kick start the process of development. Economic activity in restive provinces of Baluchistan and Khyber Pakhtunkhwa will yield economic and societal benefits. Citizen engagement will obviate trust deficit between the state and the people. This is a very pivotal plank in countering the menace of terrorism. Separatist proclivities can be defeated by the development that is likely to emanate from this corridor.
Indeed, CPEC could offer Pakistan with multifarious advantages in shape of an improved economic profile and citizen participation. However, there is a lot more to it. Optimism is elicited from the project’s value to China and strategic interests. CPEC will perch Pakistan at a central position for China to expand her economic power, and through it radiate its influence across and beyond the region. The route will considerably lessen costs and time involved in its ever burgeoning trade volume. The Gwadar-Kashghar link will be a much easier conduit for China to intrude into the Middle East and Africa. Amidst high power international realpolitik, China will do with this route.

This puts Pakistan at the epicenter, but moreover, it raises China’s stake in Pakistan and its prosperity. CPEC can be seen as a veritable launching pad for China to take strategic strides in the Middle East, Africa and beyond .Pakistan can be mollified that its stability will be paramount for China to realize her international goals. This increases likelihood of continued Chinese support for Pakistan on all fronts.

As a relatively weaker state in this association, Pakistan can garner much needed respite in an otherwise hostile environment. As a trading hub, Pakistan has a great chance to gloss its power profile and mitigate the gap between actual and potential national power. Primarily, CPEC and associated Chinese investment is estimated to increase Pakistan’s GDP by 15%. Related gains such as increased foreign Direct Investment by other countries as well as access to the land locked Central Asian states whilst circumventing an unstable Afghanistan are also expected.

CPEC will conjure dividends, but naturally China being a bigger power will have a lion’s share of the success. However, there is a need to be cognizant of the fact that CPEC is a part of OBOR which were formulated primarily to facilitate China. Pakistan will find CPEC as a significant step in ameliorating its feeble economic outlook, which in the years to come will act as a conspicuous sinew of national power.

The success of this mammoth initiative hooks upon a correct assessment of threats. It is vital to be vigilant of Indian maneuvers such as attempts to make an Indo-Iranian Nexus via Chabahar as well as RAW espionage activities in Western Pakistan. Though, this merits another piece, but diplomatic and military alacrity is of the essence if CPEC is to bear fruition.

In sum, CPEC, as a glaringly lucrative venture for both South Asian neighbors will solidify strategic relations between the two countries. The importance given to CPEC is ascribed to the “vitality” of vital interests. The goodwill and alliance between China and Pakistan, like since the very beginning hinges upon a convergence of aims.

is Research Associate at the Center for Security, Strategy and Policy Research, University of Lahore.