EU at the Brink with Brexit

Britain’s determination of leaving the EU, even when facing penalties and knowing that it will have more trade restrictions in an already depressing European economy – raises some vital question for Europe. What benefit has Britain to gain in leaving? How will the EU maintain a power balance after Britain? and will the EU be considered so positively functional and beneficial to the other members as to stop them from leaving, in the footsteps of Britain?

Prof Romano Prodi, former President of the European Commission, describing the EU said that since Christ, Europe had not seen any three consecutive generations of peace till the EU but, he emphasized, this peace has been taken for granted by these new generations, creating the passivity that has rendered the EU inexistent in global politics.

Moreover, EU is a set of independent states who have compromised some part of their sovereignties for the purpose of unity – but that does not undo them as separate linguistic, cultural and politico-economic systems, that have to do for their own survivals and progress on their own. Considering which, it seems that an economic integration into the EU has only decreased the competitiveness of EU members, as we see the periphery states spiraling into debts and bankruptcies, and that the EU’s share in world economy has shrunk as the integration has evolved, the IMF chart below shows exactly that. 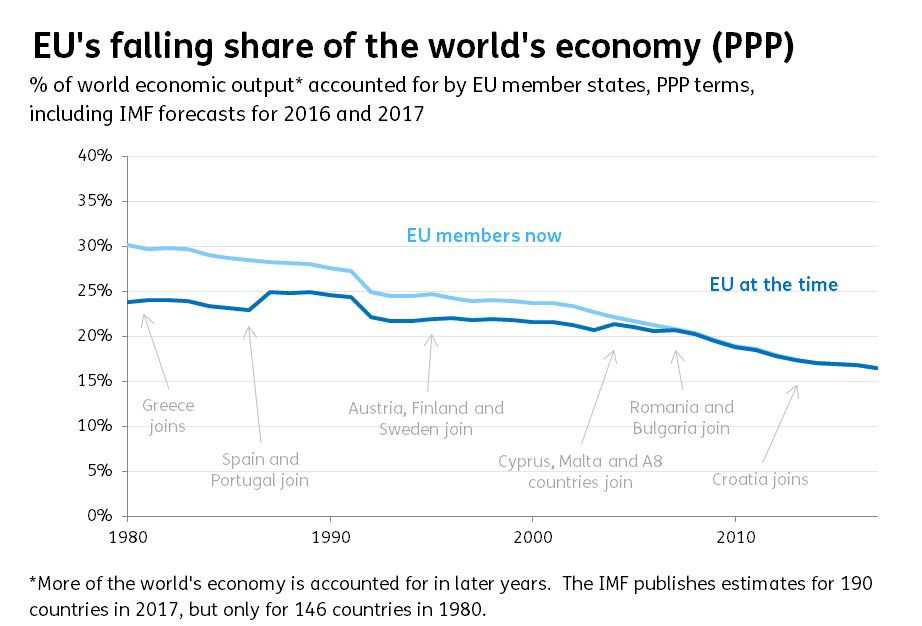 This means that even though the member states sacrificed some of their liberties in joining the EU, and though this has given them a sense of internal peace within Europe – yet most of them have not benefited economically in the long run. Eurosceptics feel that in trying to increase the overall competitiveness of the EU, many times the competitiveness of member states has been compromised. In other words, the welfare of the EU is not necessarily the welfare of all/each members – like it would be in the United States of America, where any state that is in trouble will be covered by welfare schemes and funding from the center, as all states are prepared to help each other, all being part of one big state – but the EU has failed to bring its members together as federated parts of a single polity in this way.

Moreover, EU is a set of independent states who have compromised some part of their sovereignties for the purpose of unity – but that does not undo them as separate linguistic, cultural and politico-economic systems, that have to do for their own survivals and progress on their own.

For instance, in the case of Greece, money was poured into the state, not as welfare money, but as a debt that had to be repaid, that also, not in easy instalments but with strict austerity measures imposed at the same time. Eventually Greece failed as a state, because the lender members did not care about whether Greece is failing or not, they just wanted their loans paid back. Greece felt that it was trapped, the rich gave it money that it could do without and that they knew that Greece would never be able to repay. Was this a unity or was this an enmity?

Germany, that had lent Greece all the money, was a major beneficiary of Greece’s debt crisis, earning a total of €2.9 billion between 2010 and 2017. Ironically, Germany also has an overall overbearing weight in the EU. Perhaps because of being the strongest industrialist and exporter in Europe, Germany has gained supremacy in EU decision making, especially as France weakens with its own internal politics and because of Britain’s parting its ways. This German-centricity in the EU not only taints the already undemocratic posture of the EU, it also urges members to look back into Europe’s dark past with Germany, instead of looking gracefully into the future. And Brexit will only enhance Germany’s role in the EU. The fact that Britain is a major economy in the EU, and the fact that its leaving will only damage the overall prospects of the EU, may drag the EU into a Germany-centered polity who will use all the might of the EU to compete with Britain, that will then be seen as a deserter. And also a strong competitor, as shown in the following figure from FT. 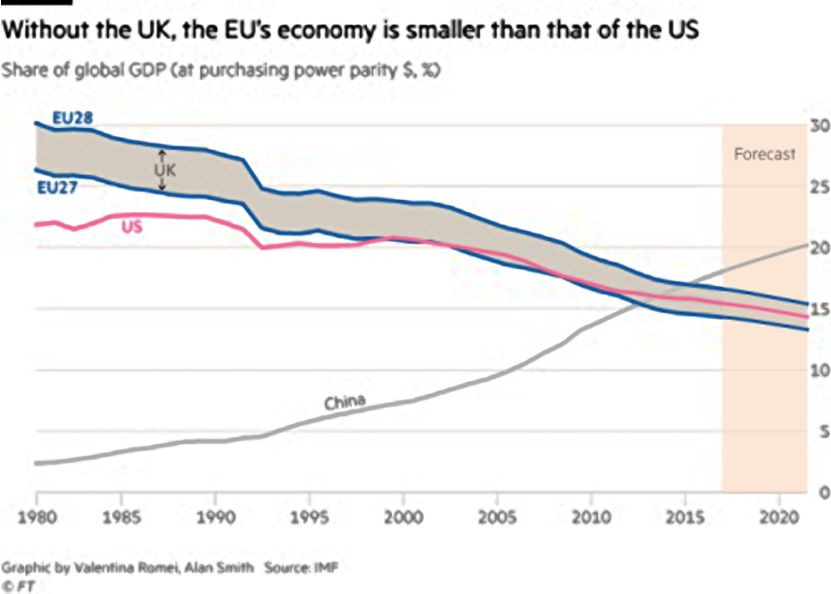 According to FT, ‘the UK’s scheduled 2019 departure is likely to translate into higher growth figures for the bloc as well as stronger export figures and savings rates. But Brexit would also leave the EU poorer and more afflicted by joblessness and low productivity than before’. An eventually weaker EU, where the periphery states have suffered more than they have gained and with Britain’s example, there is a grave fear that more will follow the path Britain has taken and leave the EU, adding to the shrink in the EU economy and also in its prestige as a successful union of Europe.

But if Britain was the second biggest economy of the EU and if it will have to pay a hard price for leaving, and if the EU is failing to give UK a respectable deal anyways – then why is it leaving at all? This brings us back to the ideological dimension of the EU, where according to Prof Romano, the EU has come to be evolved as a completely non-existent entity in global politics. Members feel further suffocated as the EU bars its members to make independent trade or security pacts outside the EU.

This German-centricity in the EU not only taints the already undemocratic posture of the EU, it also urges members to look back into Europe’s dark past with Germany, instead of looking gracefully into the future.

Britain, with its imperial past, can perhaps not cope with the idea that it had no say in the matters of Ukraine or Syria; that it is not part of any conflict resolution around the world, when Russia is leaving behind even the US in global arbitration. Perhaps Britain foresees Russia’s growing assertiveness, and China’s growing power and prowess, as approaching its side of the continent. And perhaps, with a weakening and isolating US, it is feeling that it will have to stand up for itself once again.

Yet again, is Britain leaving a weakened EU that would inevitably crumble under its own weight, not posing as a competitor – or is Britain leaving an unpredictable EU that might become its biggest threat right across its borders, with old enemies becoming yet more powerful than ever before.

is a geopolitical analyst who frequently writes for Express Tribune and Daily Pakistan Global.