How Indispensable CPEC is for OBOR

The clangour notching up with the steady materialisation of China Pakistan Economic Corridor (CPEC) has strategic underpinnings aimed to rankle the highly ambitious One Belt One Road initiative –  a cobweb of land routes across Asia and maritime seaway from the Pacific Ocean to the Mediterranean Sea – launched by China in 2013. 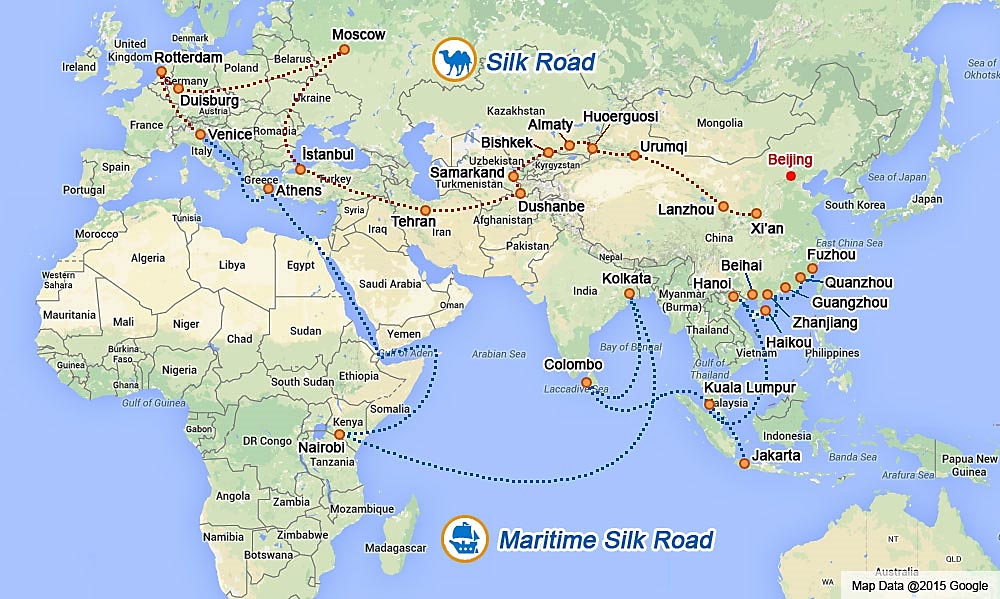 This palpability can be attributed to the disclosure of the United States infamous ‘Pivot to Asia’ doctrine – implicitly meant to forestall Chinese rise in the Asia Pacific region – issued in 2012. To achieve that, the doctrine posited that more resources shall be appropriated by the US for the South East Asian region. Though the wordings of the policy underscored the virtue of deepening working relationship with China but the efforts in last four years clearly lack in substance. Instead of constructive engagement, balancing has become the new buzzword in American policy circles.

The chatter on State Department level has got a clear cut endorsement from the Department of Defense. In August 2015, Pentagon issued its maritime security strategy for the Asia-Pacific region outlining that the US navy will “deter conflict and coercion and respond decisively when needed” as a response to perceived Chinese expansionist moves in the South and East China Seas. This strategy is clearly a representation of US designs to maintain its military sway in the Indo-Pacific littoral.

Primarily concerned about the regional maritime domain awareness within the South East Asian countries – Indonesia, Malaysia, Philippines, Thailand and Vietnam, a capacity building plan titled as Asian Maritime Security Initiative was rolled out by the US DOD in April 2016. It was another rebalancing act of Washington that was viewed warily by the Chinese administration; a blatant ingress aimed at influencing the regional maritime order while circumventing the collective forum existent in the form of ASEAN. The response elicited by President Mr. Xi Jinping after the UN Hague based Permanent Court of Arbitration ruled against China’s right to resources within its “nine dash line” reflects that Beijing prefers resolution of maritime dispute through a regional exclusive mechanism and consider foreign intrusions considerably distasteful.

A theoretical consideration of offensive realism if viewed in practical context does not preclude the possibility of a military confrontation in future. China is now openly projected as a top national security threat to American interests, on a much bigger magnitude than the Islamic State of Iraq and Syria, a terror conglomerate that has captured vast swathes of Syrian and Iraqi territories. In lieu of the US solidifying its military alliances through troop deployments in Japan, South Korea, Philippines, Australia and Singapore, the notion that China containment policy is at play, cannot be brushed aside.

The materialisation of a corridor stretching from the Chinese border to Pakistan’s deep water port cripples it. 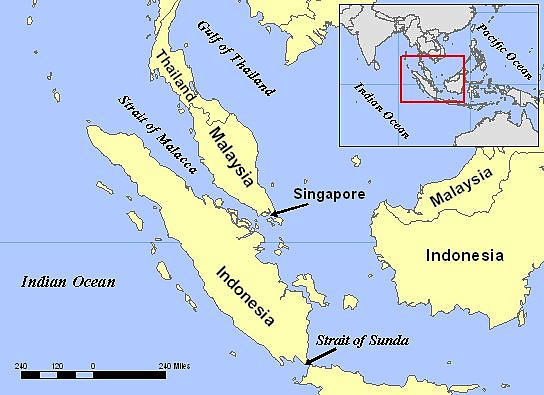 If observed closely, Pakistan by the virtue of its centrality has a unique placement in the larger OBOR scheme. Realpolitik dictates that if the conflict escalates in an all-out war, a blockade of China bound maritime traffic imposed by US military, with the support of nations having control of key international straits would prove to be decisive. The focal point of this blockade will be the key chokepoints of the Strait of Malacca and the archipelagic straits of Indonesia.

Poised to accelerate the development process, China’s demand for oil supplies is constantly rising. Even when there was no growth in Chinese exports (year 2001 and 2009), the oil demand continued to increase.

As of now, 48% of Chinese energy exports of oil and other commodities from the Middle n East passes through the Strait of Malacca, a funnel shaped sea lane 500 miles long between Malaysia and Indonesia. At its narrowest, near Singapore, the sea is just 1.7 miles wide. The excessive reliance of China on the Malacca Straits can be gauged by the reasoning that in case of naval blockade, the ensuing energy crisis could emasculate Chinese economy. 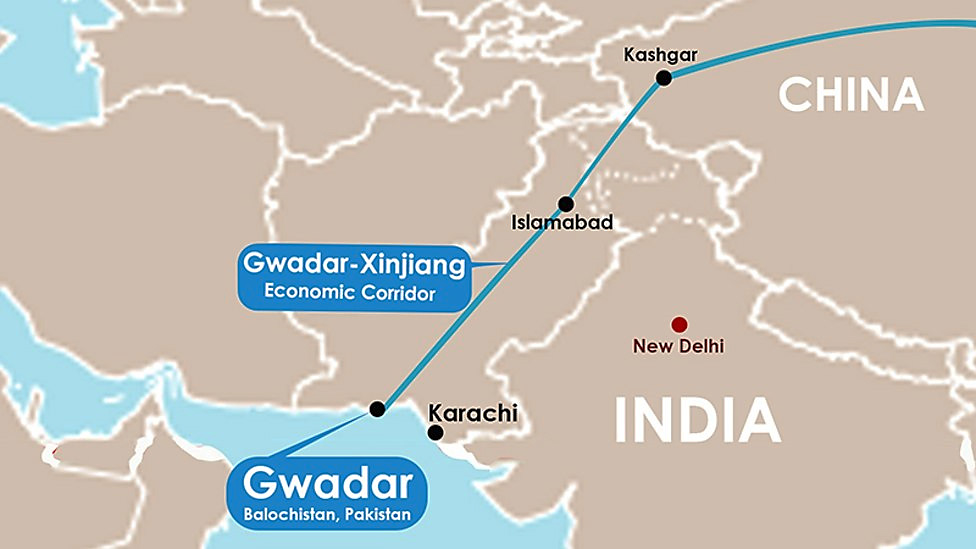 The China Pakistan Economic Corridor (CPEC) is an alternative overland route connecting West Asia via Gwadar Port in Arabian Sea with China. Located near the key oil shipping sea lane of Persian Gulf, it is a deep sea port that has the potential capacity of handling 400 million tons of cargo annually. Instead of traversing an additional 9000 kilometres, an approximation of distance from Gulf of Aden till South China Sea, the 3000 kilometres land route from Gwadar Port till Xinjiang Province will make impressive savings for China with regards to shipment costs, and time. Most importantly, from the strategic aspect, the CPEC will ensure that if the Strait of Malacca trading route to China is blocked, Beijing can rely on other route to transport oil.

If the Maritime Silk Route component of OBOR is analysed, the significance of CPEC becomes more evident. An ambitious undertaking that aspires to attain global connectivity, the MSR will incorporate Asia, Africa, Europe, and neighbouring seas. This sea route has three pillars linking China to Europe: starting from the South China Sea, connecting to the Arabian Sea, and extending onwards to Mediterranean Sea via Suez Canal.

Due to its linkage with CPEC and its geographical positioning in the Arabian Sea, the Gwadar Port shall act as a linchpin of OBOR scheme. It cannot be disregarded that that Gwadar Port will be modelled as a joint Sino–Pak naval offensive base in future, having round-the-clock Chinese military presence. Apart from easing the counter-piracy operations in the Strait of Hormuz, the Gwadar Port can aid in offsetting the naval advantage of littoral states who can choke of China trade and energy logistics in case of hostility. The probability of Maritime Silk Route remaining operational, even in case of any contingencies, thus increases manifold.

Constant opposition has become a normative feature of CPEC project. For subversive purpose, intense information campaigns aimed to discredit the corridor are being directed by the actors who paradoxically don’t respect the territorial sovereignty of Pakistan, nor regard Pakistan as a state.

The amount of influence which PUT’s social media propaganda has managed to generate has proven to cross all predicted thresholds of influence. Today, almost half of all posts on CPEC are in fact against it.

The foundation of anti-CPEC propaganda rests upon the highly exaggerated and dubious assertions that CPEC is a Punjab-specific project. Employment of this communal card has managed to create a common ground for all anti-Punjabi groups, be they Sindhi, Baloch or even aggrieved citizens in Gilgit-Baltistan; ultimately, all these activities are fused into a compact whole against CPEC which much to the dismay of the country’s interests, is not being addressed seriously by an impervious civilian government.

It should be noted that Pakistan is becoming increasingly conspicuous in the Asian arena. As the route through Pakistan’s territory has unsettled the carefully crafted out containment strategy of the US to obstruct Chinese hegemony in South Asia, Pakistan needs to strike an immediate balance that doesn’t embroil it in the Thucydides trap of a rising power versus an established power. The internal fault lines born out of bad governance can be exploited readily by those who are averse to the completion of CPEC. Strong governance and proactive diplomacy in the coming days will help us avail the positive results.

is the Director Academics at the Centre for Strategic and Contemporary Research.