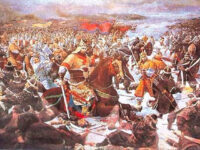 The Ideology of a Total State in Early China

The age of the Warring States (453-221 BCE) that preceded the establishment of the Chinese empire is often associated...