The Med Fisherfolk of Pakistan: Their Indigenousness, Land and Sea Rights in Perspective 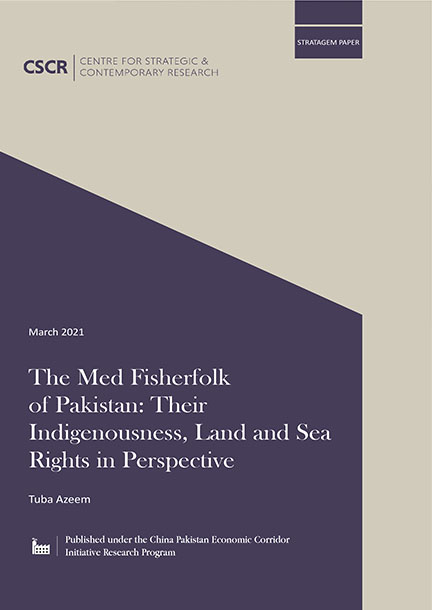 Ownership of land, its possession, resources, and use, are considered fundamental rights of a citizen. They are equally protected under article 23 of the constitution of Islamic Republic of Pakistan and threatened at the same time when article 24 creates an exception for state authorities to purchase such a land from a citizen. It is done under the pretext of national interest to assist a mega project, infrastructure development, or expansion of the agricultural lands. In the coastal province of Balochistan, to support China Pakistan Economic Corridor in the cities of Gwadar and Lasbela, many of such properties have been expropriated from the locals by the port authorities regulated under the federal and provincial governments, and security agencies like Pakistan NAVY, Coast Guards, and Rangers. Along with a handful of tribal leaders, they have occupied large tracts of coastal lands, lagoons, foreshore. While the entire coastal belt of Balochistan (700km) is decorated with security check points and fenced beaches. It violates the land and sea rights of the fisherfolk of Balochistan.

The fisherfolk of Balochistan are locally called Med, the fish-eaters. Med arguably are indigenous to the Makran region and 70 per cent of their population resides near the coastline of Gwadar district (600km) within 30 km of the Makran coastal highway, while remaining belong to the Lasbela District (178 km), where agricultural and industrial activities are prevalent. Their indigenous to the region has encouraged the sub-nationalist Baloch leaders to demand total control of land and marine resources of the region. The subaltern condition of the fisherfolk is being manipulated, staging them as protagonist to the brewing militancy in the coastal areas of Balochistan and to invoke instruments of international law on human rights and indigenous peoples. This factor makes it more critical to realize the position of fisherfolk as an important stakeholder to all affairs of the coast and demands pertinent reforms by the state to address their dispossession from their ancestral land territories and the traditional waters of the Arabian Sea.

The indigenousness of Med is trajected through the events of history and documented by the political agents of British Raj at the dawn of the 20th century. The physical dynamics of the coast made the best out of Med as they were the first sea-going people of Asia. The harsh weather and difficult terrain made them happy-go-lucky fishermen and excellent seafarers. They were known as buni or asli (indigenous or inborn) to the region and defended their ancestral lands and traditional maritime routes from intruders including Portuguese in the 16th century. They had held bloody relations with the ruling state of Kalat starting from the 18th Century under Mir Naseer Khan Noori whose army killed thousands of people of the coast of Zikri faith and was hated by the locals, and Gichki and Buleidi rulers.

Gradually the coast attained a cosmopolitan character comprising Arab Baloch rulers, Black Africans, Hindu financiers, harbor contractors, Ismaili (Khoja) traders, and working-class Baloch sailors and fishermen. Because with the passage of time, many people from interior Balochistan and other parts of the country entered the fishing profession. The outsiders adopted fishing as an occupation and received the label of Med. However, Med fisherfolk as of today not only perch at the bottom of Baloch social hierarchy but are marginalized due to uncompensated infrastructure development on their ancestral land territories and experiencing restricted access to the sea due to militarization of the coast and foreign trawling in the territorial waters of Balochistan. These factors have successfully urged the Baloch sub-nationalist leaders and local communities to claim rights in an anticipation that tagging their struggle being “indigenous people” will attract significant but constructive attention from the international civil society organizations, the state and the CPEC authorities.

However, they are on the wrong side of the argument. Because time and again the state policies and the judicature declared and proclaimed the indigenous tribes of the country and prioritized them for health programs, admissions in professional colleges, scholarships for higher studies, and employment in federal and provincial departments. A local certificate in Balochistan, is issued to a person who belongs to an indigenous tribal community or population of the province, have their ancestors lived in the same region and have been recognized and declared as native from time to time. While a domicile certificate is issued to a person who does not belong to the province’s majority population and migrates to Balochistan or served in Pakistan Administrative Service. In 1978, the Quetta High Court limited the criteria for a domicile certificate to the residence of minimum 12 years and a completion of three standards of education until bachelors. The rationality of the decision closed doors for later ambiguities. However, the decision does not compensate the present condition of the fisherfolk. As four kinds of documents were consulted by the Court as evidence to ascertain residency of a person, which are unfortunately unaccustomed to the fisherfolk, i.e. (i) revenue records consisting of possession of land, (ii) residency certificate, (iii) attainment of any services (like scholarships), or (iv) order of the local political agent. The fisherfolk do not hold any documents of their ownership.

For one quick solution the revenue department can step forward to help fisherfolk attain the necessary documentation as it previously did in the first tenure of Benazir Bhutto for the fisherfolk of Keti Bundar, when the government was considering modernizing the port and mobilization of the fisherfolk of Sindh. If this suggestion is unrendered for, then this article suggests land reforms in style to previous land reforms of the government to empower the farmers, tenants; to uplift the agricultural economy of the country. Exactly that is required to uplift the fisherfolk, seafarers, fish merchants; to uplift the maritime economy of the country. The Med fisherfolk as important members of the coastal communities should be at the forefront. What statutory law has to say in this situation? Here three national acts are relevant: The Acquisition Act 1894, the Illegal Dispossession Act 2005, and the Specific Relief Act 1877.

It is the Acquisition Act that empowers the state authorities to expropriate indigenous lands under the pretext of national interests for military and companies or public welfare. With the fisherfolk of Gwadar that has been done without affording them compensation and adequate resettlement. The fisherfolk of other coastal towns expect the similar fate. While the Illegal Dispossession Act only empowers an owner with lawful ownership and title from forcible dispossession by the land mafia. The fisherfolk cannot be beneficiaries of this enactment as it is intended at metropolitan areas like Karachi; where a norm is famous that “half of Karachi is in land debt to the other”. The fisherfolk have in their favour the section 9 of Specific Relief to recover their indigenous lands if expropriated without their due consent and course of the law. However, such a land must not fall within the exclusive jurisdiction of the revenue department. Then it is the matter to interpret by the revenue courts under the tenancy acts.

This situation also requires determination of the exact nature and extent of the coastal lands the fisherfolk had held long before the inception of Pakistan or the intrusion of the British Raj and the Arabs. It is a question of legal history. It requires closely looking at the tribal structures of Makran and Lasbela, especially when Mir Naseer Khan Noori established the Baloch nationalism in 18th century to create territorial integrity and political power. He converted the pastoral, nomadic society of Balochistan into a feud of tribes, drew imaginary boundaries and gave unquestioned powers to tribal sardars. It built land insecurity and kept deprived the Med fisherfolk to take lawful ownership of the land for next generations. The old district archives and gazetteers issued by the British political agents and Baloch historians provide customs related to the ownership and possession of land with the indigenous tribes. They can shed light on the status of the socio-economic condition of the coast and the overall attitude of the coastal communities towards the coastal land and the sea. While it is for the state to contemplate their present condition, realizing how crucial it is for the fisherfolk to strengthen their bond to the sea.

In Government of Sindh vs Board of Revenue and others, the tone and intention of the judge dictated the double standards of the state towards the fisherfolk of the sea. The Court refused to acknowledge the customs to use the foreshore and any record with the revenue board on the possession and use of the coastal land for fisherfolk of Sindh (locally called Mohana or Machi) at the French beach near Karachi. While in Iftikhar Muhammad Chaudhry and others, the court declared the right of the fisherfolk of Machar Lake to fishing and protection of the habitat as fundamental and quintessential to their existence. It pinpoints the fact that water rights in Pakistan are discussed under the headings of access to clean drinking water, irrigation of crops and agricultural tracts. However, sea rights are understood as state’s interests to manage the maritime zones, sovereignty and exploitation of marine resources. And not as the coastal indigenous peoples’ rights to navigate the sea routes freely and use the foreshore and territorial waters to pursue their livelihood.

This hypocrisy is rooted in the exploitation of natural resources that must rest with the federal government. Seeing the worth of marine resources, the state was clever enough to promulgate the presidential ordinance to control the marine resources under the infamous 2020 Island Ordinance but plain ignorant of the whims of the fisherfolk of the Arabian Sea. Therefore, this article recommends land reforms in favour of the Med by giving them ownership of the coastal land, which is possible only by taking away massive acres from the political elites and tribal sardars. An immediate action is required to provide the entire coastal belt with a special status, restraining anyone other than the fisherfolk as coastal indigenous people to lawfully own the property and create interests in the land for non-locals and development authorities. Med should have an exclusive right to the territorial sea and provided with licenses to navigate and accumulate marine resources.