China Taiwan Issue and the Role of the US

During his recent official visit to the UK, the Japanese Prime Minister Fumio Kishida warned that the “Russian invasion of Ukraine could be replicated to East Asia”. His statement might not be wrong if one observes the mounting strategic rivalries between China and Taiwan, China and Japan and the increased unofficial military presence of the United States (US) in Taiwan. Also, over the past few months, tensions between China and Taiwan have been simmering due to the growing Chinese People’s Liberation Army’s (PLA) activities near the Taiwan Strait and the hardening stance of the US regarding the issue.

The Chinese government sees the strait as an inalienable part of its country, deeming the island a matter of its national sovereignty and security. In contrast, many Taiwanese disagree, considering themselves as a separate nation.

Historically, the question of Taiwan is centuries old, as it has been ruled by the Dutch (1624–1661), the Kingdom of Tungning (1661–1683), Qing Dynasty (1683–1895) and consequently powerful states like Japan and the People’s Republic of China (PRC). At the culmination of the First Sino-Japanese War in 1895, the Empire of Japan defeated China’s Qing dynasty, and the Qing government had to concede Taiwan to Japan. Consequently, decades later, after the Japanese historical defeat amidst World War II (WWII) in 1945, it surrendered to the US and relinquished control of the territory it had seized from China earlier. Later, a civil war erupted in China due to the power struggle between Kuo Min Tang (KMT), a nationalist party of China, and the Chinese Communist Party (CPC). KMT’s head Chiang Kai-shek’s military was defeated by Mao Zedong’s Communist armies (Founder of today’s CCP) who took control of mainland China. Chiang and his KMT government departed for the island strait, started political activities, and dominated the island’s politics for several years.

Ever since the US embarked on extending strategic support to the strait in the 1950s, Taiwan became a potential hotspot between Beijing and Washington, intensifying the confrontation between the two. The US supported Taiwan several times as it had been its Cold War ally and internationalised its issue on several occasions. However, due to the geostrategic competition between the US and China in the Indo-Pacific, China’s economic and military modernisation posed perhaps a lesser threat to the US and more to its allied partners. China’s increasing differences with Japan,Taiwan and the South China Sea over territorial disputes challenged the US to maintain its “power balancing” in the Asia Pacific.

Ever since the US embarked on extending strategic support to the strait in the 1950s, Taiwan became a potential hotspot between Beijing and Washington, intensifying the confrontation between the two.

Curbing the Chinese influence in the Indo-Pacific region is a potential grand strategic goal of the US administration facilitated by its strategic and defence support to its allies. The US extends its economic and defence aid to its allies to maintain its “power balancing” anywhere the country’s interests meet. Following the China-Taiwan conundrum, the US finds itself as a deterrent state for China with regards to Taiwan in order to contain Beijing’s growing influence in the region. However, this provokes Beijing and could compel it to employ forceful means. President Xi Jinping articulated several times that it will take Taiwan by using “all necessary measures”.

Despite not having official diplomatic relations with Taiwan, the US  has allegedly stationed its forces on the island to provide training to the Taiwanese military. In December last year, the US doubled its unofficial military presence in the Taiwan Strait. As per the Wall Street Journal’s report, the US clandestinely operates its Special Operations unit along with Marine forces there, which could provoke China, disturbing the regional dynamics. The Chinese government has warned the US administration to halt its military support to the island.

On the other hand, the US arms sales to Taiwan have recently increased. The latest $95 billion worth of arms assistance of Washington to Taipei in April 2022 made it the third arms sale package to the island since President Joe Biden took charge in January 2021. China strongly deplored such assistance and warned the US government for violating the one-China principle and claimed the US of “rudely interfering” in China’s domestic affairs. Earlier in February and last year in August, the US lent $100 million and sale of equipment and services worth $750 million to the Strait. The US economic and defence assistance to allied partners may be interpreted as a strategy for selling its arms and installing pro-American liberal democracies. As for the US, military aid to Taiwan remains largely greater than the general economic assistance (refer to figure 1 from 1950 to 1967). 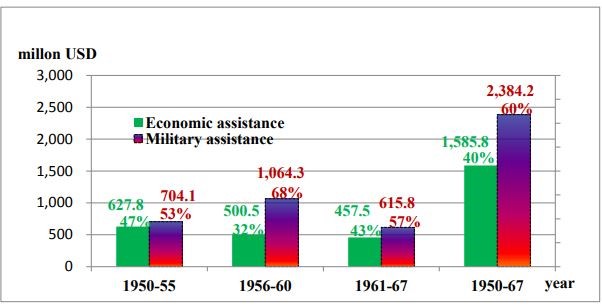 The US’ unceasing military backing to Taiwan and its probable agenda of injecting democratic values into Taiwan are quite irksome for China. It could provoke China to opt for offensive means pre-emptively, like the Russian invasion of Ukraine. The Chinese PLA might have learnt from the strategic “missteps” of the US in the case of NATO’s enlargement towards Eastern Europe and its “incapability” amid the ongoing conflict between Russia and Ukraine. On the other hand, most recently, China signed a security pact with the Solomon Islands to enhance its influence in the region, a quite alarming development for the Biden administration and its allies like Australia and New Zealand. The US, likewise, may be considering renewing its engagement in the Solomon Islands. Besides, to maintain peace and strategic equilibrium in the region, the US should be cautious in stating its policy, as the President’s recent statement regarding military intervention “angered Beijing”. However, the White House maintained that the policy was unchanged and referred to Biden’s earlier statement that the US Taiwan policy “has not changed at all”. Lastly, any missteps on the part of the US could pose threats to its allies like Australia, which could become a direct target of the PLA’s actions based on its security coordination with the US through ANZUS and AUKUS pacts.

Sajjad Ahmad is working as a Communications Assistant at CSCR.