Efforts to build and lay down the tarmac were observed in early 2020. As of February 2021, the process is still ongoing. 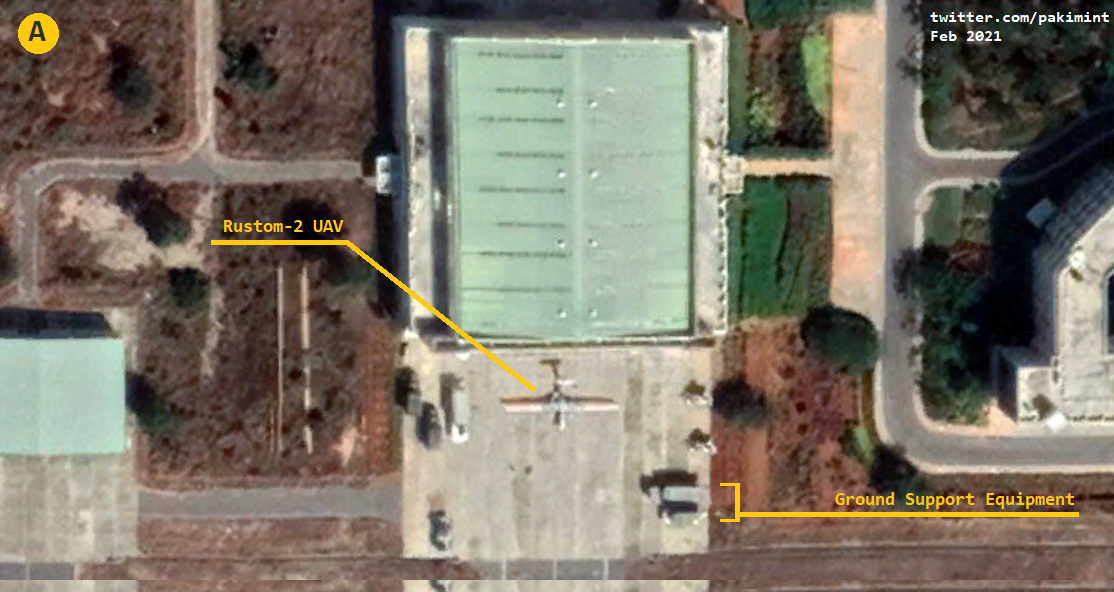 Chitradurga ATR was set up to conduct the flights of DRDO’s Unmanned Aerial Vehicles (UAVs), part of the Rustom family. The Tactical Airborne Platform for Aerial Surveillance-Beyond Horizon-201 (TAPAS BH-201) or Rustom-2 UAV was successfully flight tested at Challakere ATR in November 2016. The following year, in May 2017, the facility was formally inaugurated by the then Indian Defence Minister Arun Jaitley (late) during Prime Minister Narendra Modi’s first term in office. Among then reported future plans for Chitradurga ATR were the runway extension to enable air-to-ground weapons and drop tank jettison trials for Light Combat Aircraft (LCA) Tejas, the Ghatak Unmanned Combat Air Vehicle (UCAV) project, and unspecified fighter jets.

The ongoing extension of the runway suggests that India’s security establishment has an eye on the timely completion of infrastructure necessary for the testing of upgraded UAVs with enhanced payloads, particularly the Rustom series.

Another successful flight test of Rustom-2 was conducted in February 2018, in user configuration with a higher power engine. In September 2019, one Rustom-2 crashed 40 km from Chitradurga ATR due to a technical snag. Tests of the Rustom series received increased attention in the wake of the Indian Army’s clash with the People’s Liberation Army (PLA) in Ladakh. In October 2020, the DRDO conducted an almost 8-hour-long flight test of Rustom-2, soaring to a height of 16,000 ft. Scientists have been working rigorously since to meet the Indian Air Force’s (IAF) requirements for Rustom-2. Furthermore, efforts are in hand to take the endurance closer to 24 hours at 30,000 ft. Alongside, the Rustom-1 is being modified for armed roles with new systems and enhanced payloads.

Other consumers interested in DRDO’s Rustom series include the Border Security Force, the Central Reserve Police Force, and the Indian Navy. Reportedly, India’s Cabinet Committee on Security intends to approve the project for UCAVs later this year. It was only a few months ago that Retractable Landing Gear (RLG) systems were provided by the DRDO for fitting on Rustom-2 and India’s ultra-secretive Stealth Wing Flying Testbed (SWiFT) UAVs. The latter is a scaled-down version of the Ghatak.

In the long haul, the Ghatak project is linked to the development of India’s fifth-generation stealth fighter Advanced Medium Combat Aircraft (AMCA). IAF chief Air Chief Marshal Rakesh Bhadauria recently stated that the IAF intends to procure 450 fighter jets for deployment in western (Pakistan) and northern (China) fronts. Besides the Rafales bought from France, these would include six squadrons of indigenous AMCA, which is almost around 100 aircrafts.

The ongoing extension of the runway suggests that India’s security establishment has an eye on the timely completion of infrastructure necessary for the testing of upgraded UAVs with enhanced payloads, particularly the Rustom series. Moreover, this would help reduce the burden on DRDO’s Kolar test facility and a military airport maintained by Hindustan Aeronautics Limited.

While ground tests of the Ghatak were reportedly completed in early 2020, flight tests by 2022 could be a possibility. The more significant development, however, is the projected operational use of Chitradurga ATR by indigenously manufactured fighter and Airborne Early Warning and Control System (AEW&CS) aircraft.