Since 2005, more than 320 state-sponsored cyber operations have been conducted. The ever-increasing rate of cyber operations has raised the prospects of cyber conflicts. With more than 30 states having the capability to conduct cyber-attacks, it is imperative to introduce measures to regulate the behaviour of states in the cyber domain. In this regard, cyber-peacekeeping has emerged as a potential measure to deal with the cyber dimension of current and future military conflicts. The article deals with the challenges confronting the creation of a cyber-peacekeeping force and also offers recommendations in the form of a general framework regarding the operationalization of such a force.

Despite the emergence of the cyber-peacekeeping as a research area nearly two decades ago, nothing substantial has been materialized. This is due to numerous concerns, objections and criticisms which question the very idea of cyber-peacekeeping. In this regard, the four main challenges are as follows:

In terms of the prospects of establishing a cyber-peacekeeping force, the establishment of ‘Digital Blue Helmets (DBH)’ (analogous to blue helmet wearing physical UN peacekeepers) is viewed as an indicative factor showing how UN sees its future potential role in cyber-peacekeeping.

In terms of the prospects of establishing a cyber-peacekeeping force, the establishment of ‘Digital Blue Helmets (DBH)’ (analogous to blue helmet wearing physical UN peacekeepers) is viewed as an indicative factor showing how UN sees its future potential role in cyber-peacekeeping. DBH programme proposed a three-tier cybersecurity monitoring mechanism with the main ‘Global Cybersecurity Monitoring Centre’ located in New York in addition to regional and non-regional monitoring centres. Additionally, the UN is slowly developing the necessary cyber infrastructure and procedures to protect sensitive information pertaining to peace operations from break-ins.

Adding to the existing literature, a brief general framework is presented here regarding the operationalization of a future cyber-peacekeeping force. For formulating a working modus operandi, the UN can arrange various sessions or constitute a group of governmental experts in which government officials, tech companies, research institutes, think tanks, academia, etc. discuss the formation and modus operandi of such a force.

For building a cyber-peacekeeping force, the UN will rely on member states and tech companies to provide cyber experts whereas civilian cyber experts can volunteer their time in the form of civilian peacekeepers. Additionally, a dedicated full-time UN staff will be required for administration and coordination related tasks of the force.

The cyber-peacekeeping force can be embedded into the current hierarchical structure of UN peacekeeping by establishing a distinct cyber unit comprising cyber experts in the form of military, police and civilian peacekeepers. 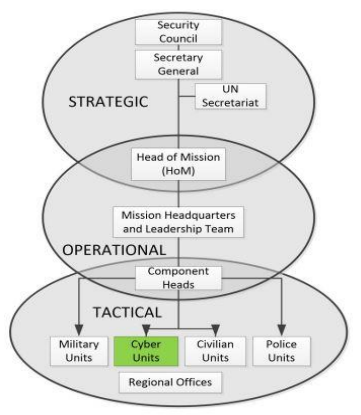 For smooth operationalization of the unit, virtual collaborative environment, defined as digital spaces where remotely located people can come together and interact with each other and with virtual objects, can be adopted. Such an environment should:

In the coming years, cyber operations are likely to be directed at UN peace operations or used by peace-keeping operations in the implementation of their mandates. However, the creation of UN cyber-peacekeeping force might seem a far-sighted idea at this point. Instead, a cyber unit comprising cyber experts from troop-contributing countries, tech companies, think tanks, volunteers to UN peace operations, is likely to be utilized for both offensive and defensive cyber operations. Before the formulation of such a unit, it is important to address all the underlying legal hurdles regarding its conduct. Similarly, the jurisdiction of this unit should be mentioned in the peace operation’s mandate as authorized by UNSC so to not leave any chance of ambiguity. In addition to awareness initiatives, all major stakeholders should undertake efforts to formulate legal frameworks for ensuring cybersecurity.