The Global Expansion of AI Surveillance Report: A Critical Appraisal for South Asia

Information and communication technologies (ICTs) have seen exponential growth and have been dubbed as the third offset strategy effecting the geopolitics of the 21st century. As far as the US is concerned, before the advent of information revolution, policy drove technology. Currently, it is technology that is driving the policy for US. Such use of technologies as one of its facets is Artificial Intelligence (AI).

However, being technical in its subject-matter, AI is being developed as well as employed in  public policy and security circles too. The 21st century wars have also evolved in a way that delicate use of sensitive technology is producing results. Clausewitz once said, ‘War is the continuation of policy by other means’. The other means in the contemporary environment are such technologies and their employment has rendered a new facet to war – Surveillance Warfare (SW).

In order to understand the effects of such advanced technologies and automated systems, it is also pertinent to explore its employment during a conflict. The Carnegie Endowment for International Peace produced a working paper in September 2019, titled ‘The Global Expansion of AI Surveillance’. The first of its kind, the paper presented AI Global Surveillance (AIGS) Index. The said index has rendered empirical data on AI surveillance used by 176 countries around the world. The report, however, does not distinguish between legitimate and unlawful uses of AI surveillance. 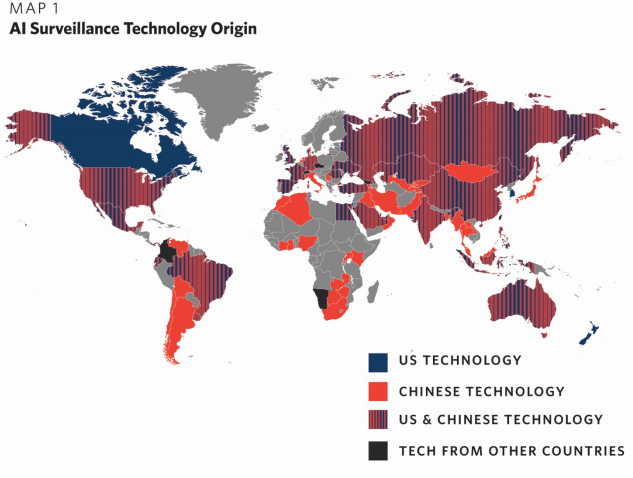 Three pertinent research questions were raised and answered in the report; which of the countries are adopting AI surveillance technology? What specific types of such technology are being used?  which of the countries and companies are supplying these technologies? Surprisingly, the regions of Far East and Asia Pacific are leading in the usage of AI. South Asia has also secured its rank in AI surveillance program which brings us to our debate between Pakistan and India as well as its impacts on regional stability.

The AIGS Index shown above distinguishes India and Pakistan on the basis of the forms of their governments initially. One can agree to disagree with the said classification based on the fact that India is closer to the US as its ally. Moreover, the report produced by the said think tank is also based and funded by the US. However, it is not a hidden fact that the former entry in the index is aright-wing populist political party based on a revisionist expansion agenda. The‘Freedom on Net 2018’ report identified 18 countries out of 65 that had accessed AI surveillance technology developed by Chinese companies. Again, the entry renders no elaboration since the same logic can be deduced from the previous entry.

Clausewitz once said, ‘War is the continuation of policy by other means’. The other means in the contemporary environment are such technologies and their employment has rendered a new facet to war – Surveillance Warfare (SW).

Moving on, the military spending from Pakistan’s side elucidates its asymmetry vis-à-vis India. The world is doing business with India. The awards given by Bill Gates Foundation also project asymmetry in national power potential as well as ambitions. However, the action is being highly criticized. The rest of the entries are similar except that Pakistan is a part of the Belt and Road Initiative (BRI) in which CPEC is its flagship project. As a result of which, India uses US tech companies for AI surveillance as it has its own version of rivalry with China whereas Pakistan uses Huawei.

It is evident from the above report in general and from the case of South Asia in particular that technology does drive nation-states towards achieving certain political objectives. On one side of the equation there is a staggering pace in technological advancements. On the other side, such technologies are also being employed for political purposes but under the realm of alliances and power configuration of geopolitical landscape. This adds volumes to emerging non-traditional security threats in the contemporary world about Barry Buzan declared as the sectors of security in the last decade of the last century.

The first of its kind, the paper presented AI Global Surveillance (AIGS) Index. The said index has rendered empirical data on AI surveillance used by 176 countries around the world.

If we take into account the above data, it can be categorically said that AI surveillance might drive the two arch-rival neighbors toward a security dilemma which would eventually lead to an arms race in the region. While Pakistan is trying to pursue a more peaceful use of AI technology through the President’s Initiative for Artificial Intelligence and Computing (PIAIC), India has the Indian administered Kashmir in the dark by cutting off its internet and telecommunication services. The region is already prone to acrisis because of the outstanding dispute of Kashmir as well as the Afghan peace process. The said state of affairs  is also emerging on the international level since the weaponization of AI has also sparked a competition between China and the the US.

The above data also provides an optimistic picture of the use of technology and especially AI easing governing structures of the state. It also bears direct impacts for the use of AI in public policy which also includes its use in medicine, education and the agricultural sector. Moreover, with advances in such autonomous systems, where does humanity stand if more humans get replaced by more machines. Conclusively, such questions also spark as to whether such novel concepts, ideas and technologies have the potential to bring about a significant impact on kinetic operations. It is yet to be seen how technological advancement in AI will   impact India and Pakistan in any foreseeable conflict.

Syed Ali Hadi is currently pursuing his M.Phil in Strategic Studies from National Defence University, Islamabad. He is a Research Assistant at the Centre for Strategic and Contemporary Research.