On March 15, an Improvised Explosive Device (IED)-laden motorcycle was used to target personnel of Sindh Rangers, a paramilitary force, in Orangi Town of Karachi. In the attack, one Rangers personnel was killed, whereas 12 others were injured. The terrorist attack was immediately claimed by the Bashir Zaib Baloch faction of the Baloch Liberation Army (BLA). In the communique released following the attack, the group’s spokesperson said that the terror attack confirms the capabilities of the terror group in targeting security forces “in any city and area”. In this article, I explain that Baloch ethno-nationalist militant groups have expanded their terror activities to Karachi due to several factors that include logistical support offered by Sindhi ethno-nationalist militant groups, tactical collaboration with Tehreek-e-Taliban Pakistan (TTP), and the potential to draw international media coverage. 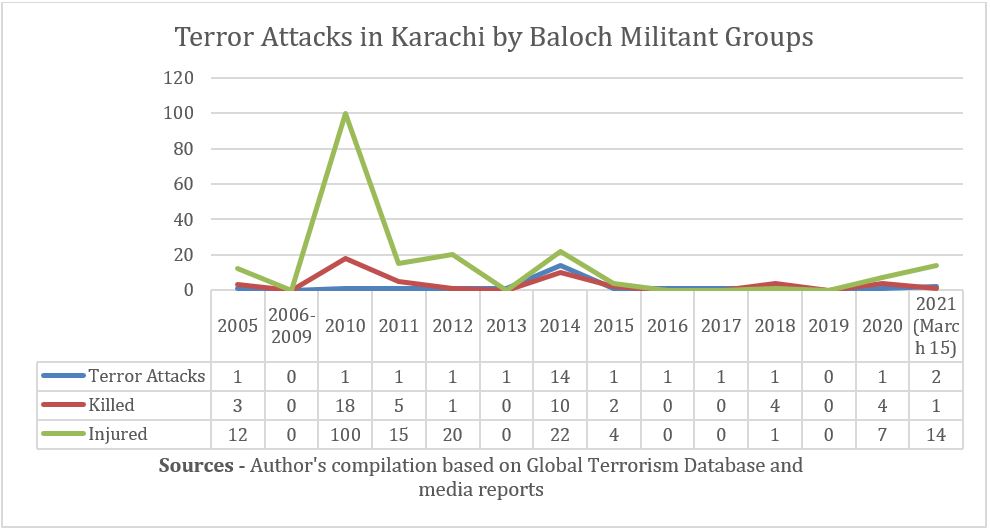 The renewed focus on Karachi began with a foiled terror attack on the Chinese consulate. Unlike past trends where the main focus was targeting police personnel, the current trend has been to target Chinese nationals and interests in the city primarily.  There are several probable reasons for expanding the focus of the terror activities towards Karachi. Following the foiled terror attack on Pakistan Stock Exchange (PSX) in Karachi, Hammal Rehan Baloch, considered as the No. 2 of BLA (Bashir Zaib Baloch faction) and commander of Majeed Brigade, told in an interview to a pro-separatist media outlet that there are four factors based on which the future target is identified for a terror attack. These four factors are as follows:

Out of all the four factors mentioned above, the key factor for deciding future targets for terror activities is the political and symbolic importance of the target. Consequently, it helps understand that the Chinese nationals are being targeted in the metropolis to gain international media coverage. The foiled terror attack on PSX was carried out due to the economic significance of the place and to deter foreign investors. Moreover, Chinese ownership stakes in the stock exchange was also another factor for attacking the place.

The key factor for deciding future targets for terror activities is the political and symbolic importance of the target. Consequently, it helps understand that the Chinese nationals are being targeted in the metropolis to gain international media coverage. The foiled terror attack on PSX was carried out due to the economic significance of the place and to deter foreign investors.

Similarly, a foiled terror attack on the Chinese consulate in Karachi was launched considering the political and symbolic importance of the target in addition to the potential to draw international media coverage. In an undated video released a few months after the foiled terror attack, Aslam Baloch, who was then leading BLA’s splinter faction, can be heard saying to the terrorists that news about the attack has started appearing on microblogging site Twitter, pointing to the potential of rapid dissemination of information regarding terror attacks in urban areas. 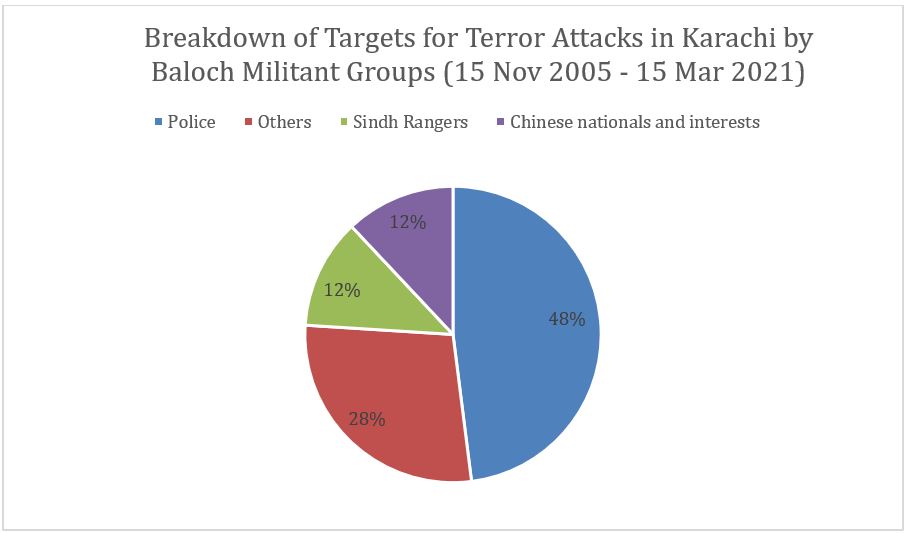 Sources: Compiled by the author based on Global Terrorism Database and media reports

The operational alliance between Baloch Raji Ajoi Sangar (BRAS) or Baloch National Freedom Front – a conglomerate of four Baloch ethno-nationalist militant groups – with Sindhudesh Revolutionary Army (SRA) in July last year has also facilitated the collaboration between these groups in terms of logistics. BLA (Bashir Zaib Baloch faction) has reportedly provided hand grenades to SRA for conducting terror attacks on Rangers personnel in the metropolis. Moreover, there is a tactical level collaboration between BLA (Bashir Zaib Baloch faction) and TTP in Karachi for terror activities as discussed above.

Meanwhile, the most common reason cited by Baloch ethno-nationalist militant groups for targeting Chinese nationals in Karachi is “blatant Chinese intervention in Balochistan”. The desire to avenge “brutalities” against Baloch people is also often reiterated as one of the primary motives for targeting security personnel.

In the prevailing situation, a two-pronged strategy needs to be adopted for dealing with the terror threats from Baloch militant groups in Karachi. It is important to take the local population on board regarding these projects to create goodwill among local people about the mega-developmental initiatives in Balochistan. Scholarship on mega-developmental initiatives reveals that local support and ownership is of paramount importance for the success of such projects. Moreover, Chinese companies working in Balochistan and Sindh should play a proactive role in improving the socio-economic conditions of the people living near the project sites as part of their corporate social responsibilities.

On the security front, it is important that the intelligence gathering mechanism in the metropolis be constantly upgraded and enhanced. A Joint Terrorism Task Force (JTTF) should be set up in order to deal with emerging threats from ethno-nationalist militant groups. The availability of intelligence input regarding future attacks in the city should be properly dissected and checked out by the JTTF. Extra vigilance and monitoring of Chinese nationals in the city should be carried out.

Fahad Nabeel is an independent researcher, and he tweets @fahadnabeelfn