Status of Afghan Refugees and Asylum-Seekers in Pakistan

Pakistan has long been hosting one of the largest numbers of Afghan refugees in the world. However, following the Taliban’s arrival in Kabul, Islamabad has refrained from granting refugee visas to the newest influx of refugees from Afghanistan and has been handing out temporary transit visas. The stance is reflective of Pakistan’s national security concerns and economic limitations. The country has been repatriating Afghans after the unfortunate APS attack and cracking down on undocumented Afghan nationals. Nevertheless, the stream of Afghans has not stopped, and Islamabad continues to be a conduit for Afghans seeking asylum in developed countries. Notwithstanding the recently completed verification drive for Afghan refugees, undocumented Afghans continue to be a matter of concern for Pakistan.

Though the Pak-Afghan border is largely fenced and guarded by security forces, Afghans manage to get into Pakistan regardless of the possibility of being sent back. Soon after the Taliban takeover, those who arrived via the official border crossings mostly claimed they were visiting for a private event or on “family business”. Through Torkham, Afghans having their official passports and visas are allowed entrance, while medical patients and children under eight years can enter without documents. Via the Chaman border, Afghan Tazkira (Afghan national ID document) holders from Kandahar are also allowed to enter. As for exit, Pakistan allowed stranded Tazkira holders to leave for Afghanistan by the last working day of April.

According to the United Nations High Commissioner for Refugees (UNHCR) estimates, there are 3 million Afghan refugees in Pakistan, of which around 775000 are undocumented. An approximate 840000 have an Afghan Citizen Card (ACC). As for the Proof of Registration (PoR) cards, the Government of Pakistan, in collaboration with the UNHCR, recently finalised the verifying process of 1.3 million Afghan refugees. The latest survey indicates that there are 1.3 million refugees in Pakistan, 100000 less than the official number used up till now. The updated numbers suggest that some Afghans refrained from renewing their refugee status due to unspecified causes or may have just gone back to Afghanistan. 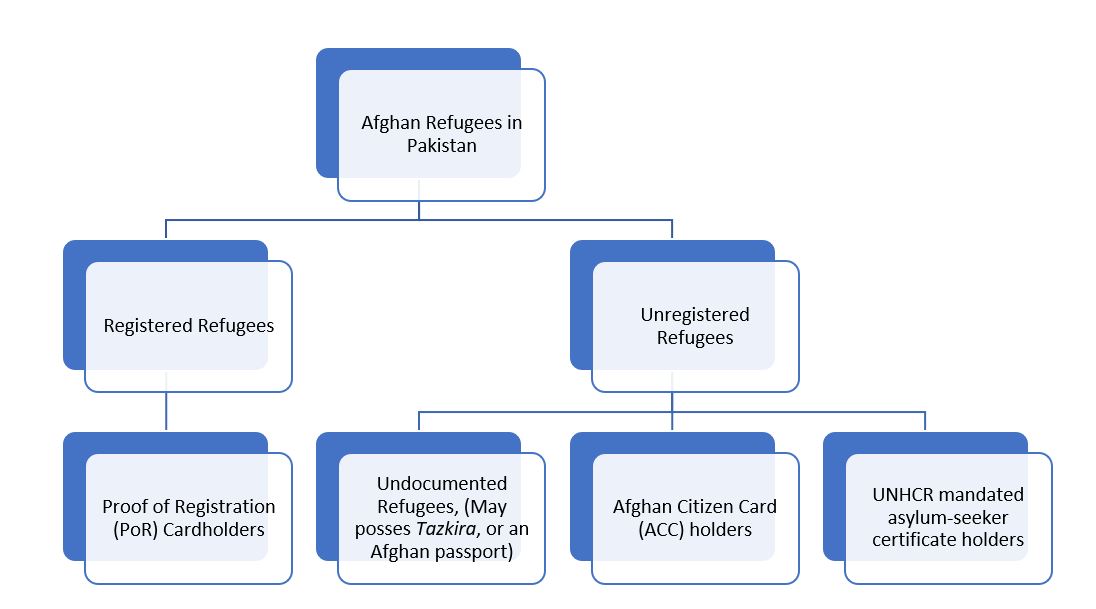 Status of Afghan Refugees in Pakistan – Plotted by the Author

The Documentation Renewal and Information Verification Exercise (DRIVE) updated and verified the information of Afghans with a PoR card. It was a joint effort of the Chief Commissionerate Commissioner for Afghan Refugees (CCAR), the Ministry of States and Frontier Regions (SAFRON), UNHCR and the National Database and Registration Authority (NADRA), Pakistan. According to the verified data, 52% of the registered refugees are children. Elderly, children, and women make up 76% of the registered Afghans. More than 50% of the documented refugees are in Khyber Pakhtunkhwa. The PoR smart cards are a vital protection instrument, as pointed out by UNHCR’s Representative to Pakistan, Ms Noriko Yoshida. They furnish identification and allow free movement and access to public facilities like banking, education, tenancy, and health care. Also, the issued IDs enable the holders to mark any particular “protection needs for vulnerabilities”.

Taliban’s latest clashes with Pakistani officials along the border have muddled the scenario for Afghans as Pakistan dreads a refugee incursion and consequent spread of extremism.

Islamabad does offer some degree of protection against refoulement to the PoR and ACC holders. For the undocumented Afghan refugees, not much protection is ensured. According to the European Union Agency for Asylum (EUAA) Country of Origin Information (COI) report on Pakistan published in May 2022, the undocumented Afghans are in violation of the Foreigners Act, 1946. The EUAA report “Pakistan – Situation of Afghan Refugees” states that undocumented refugees are vulnerable to being arrested, detained, or deported.

Undocumented Afghans refer to those Afghans who do not possess a PoR card, an ACC, or a Pakistani visa. Undocumented Afghans may have other papers, including an Afghan passport or Tazkira. According to the  Transnational Figurations of Displacement, undocumented Afghans can contact the UNHCR to undergo a Refugee Status Determination (RSD) process for getting registered as asylum-seekers. They may attain their asylum-seeker certificate, temporarily protecting them from refoulement. The security forces, however, may not always understand or respect their status. This year, until now, 34,000 Afghan refugees have returned to their homeland from Pakistan, per the record of the UN’s International Organization for Migration (IOM).

Given the deportations of undocumented refugees, there have been recurrent instances of refugees protesting for “better treatment and protection”. A recent example is the deportation of Afghan musicians living illegally in the Khyber Pakhtoonkhwa. Following their return, protests broke out this month in favour of the undocumented Afghan musicians as their safety is doubtful in an increasingly conservative Afghanistan.

Likewise, the Afghan asylum-seekers looking for refuge in developed countries while currently residing in Pakistan also face a conundrum. Though many have submitted asylum applications, the processing rate of their asylum cases remains slow. The Afghan journalists, for instance, who initially sought refuge in Pakistan following the Taliban’s takeover, have been protesting for accelerating the processing of their asylum applications for developed states. UNHCR has stated that the process might take a while, given the copious number of applications.

Nonetheless, Islamabad has not wavered in its dedication to hosting and helping refugees within reason. However, it is essential to note that Islamabad is not a party to the Convention on the Status of Refugees 1951 and the consequent 1967 protocol. Afghan refugees have been extended asylum in Pakistan despite the absence of national asylum laws in the country.

The Pak-Afghan border clashes further complicate the situation for Afghan refugees in Pakistan. The situation poses a serious administrative and security question for Islamabad. Taliban’s latest clashes with Pakistani officials along the border have muddled the scenario for Afghans as Pakistan dreads a refugee incursion and consequent spread of extremism. The country has been striving to facilitate the refugees while ensuring the state’s security. Still, despite the DRIVE, the latest number of registered refugees is way less than the earlier figure, causing the apprehension that some Afghans might not be getting themselves registered for unknown reasons. On the other hand, an ever-growing number of Afghans are becoming undocumented following their visa overstay and consequently losing any lawful right to stay in Pakistan. Still, many undocumented Afghan refugees are reluctant to go back to their homeland. As for the asylum-seekers, the international stakeholders’, primarily UNHCR’s acceleration of the process, would be welcome. Given the mounting difficulties that Pakistan and the Afghans face, the international actors need to augment their efforts ensuring a more significant contribution to combat the situation.

Fareha Iqtidar Khan is Associate Editor at the Centre for Strategic and Contemporary Research. She is also Visiting Faculty at the International Islamic University, Islamabad.