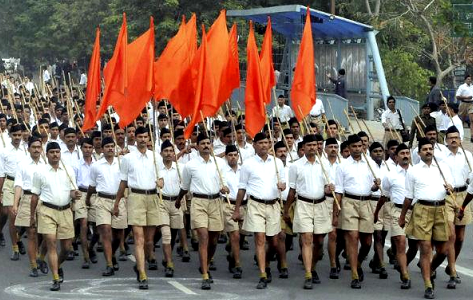 Ever since the assumption of power by the Bharatiya Janata Party (BJP) in May 2014, Hindutva outfits have been able to unleash themselves in a manner like never before. In recent years, organised schemes like public lynching, cow-vigilantism, anti Romeo squads, Love Jihad, Ghar Wapsi have been adopted by these outfits in order to transform India into a Hindu Rashtra (nation).

‘Hindutva’, a term coined by Vinayak Damodar Savarkar in 1923, is the main driving force for those who aim to create a Hindu Rashtra and are simultaneously involved in Saffron terrorism. This term has a long history that traces back to the foundation of Rashtriya Swayamsevak Sangh (RSS) in 1925. Inspired by the Fascist Nazi ideology, the RSS, during the pre-partition era, influenced Congress towards a pro-Hindu direction. After the demarcation of borders within the subcontinent in 1947, the mantra of RSS managed to attract large number of volunteers. Nathuram Godse, a worker of RSS, assassinated Mahatma Gandhi in 1948. Consequently, the RSS was temporarily banned. In the meanwhile, the RSS volunteers kept on infiltrating the army, bureaucracy, media and educational institutions. In course of time, multiple offshoots controlled by the RSS started.

At the moment, the RSS spearheads at least 52 affiliated organisations, collectively known as the Sangh Parivar (translation: family of Hindu nationalist organisations). These organisations are further categorised into political, occupational and professional, economic, women, religious, educational, socio-ethnic, news and communication, think tanks and overseas categories. The most prominent of these organisations include BJP (political wing of RSS), Vishwa Hindu Parishad or World Hindu Council (Organisation for Hindu priests), Bajrang Dal (militant youth wing of VHP) or the Army of Hanuman (foot soldiers of Hindutva ideology)

In addition to the Sangh Parivar, there are local entities that are allied to Sangh Parivar, but may or may not follow the Hindutva ideology, and are not under the direct control of RSS. Shiv Sena (translation: Army of Lord Shiva) and Sanatan Sanstha (trsanslation: the Eternal System) fall under this category. Apart from local entities, Hindutva splinter cells also exist that fully follow Hindutva ideology but have rebelled against the Rashtriya Swayamsevak Sangh control. Abhinav Bharat, or Young India is one such entity.

The Sangh Parivar draws its strength from the spread of Hindutva ideology. Some of the main tenets on which their belief hinge includes:

One of the concepts propagated by followers of Hindutva ideology is Akhand Bharat (Undivided India), which includes countries ranging from Afghanistan to Indonesia, as the Hindu homeland. The concept of Akhand Bharat was put forward by Chanakya, a political philosopher. The 3rd century BC Indian subcontinent was divided into many independent kingdoms. Chanakya’s Akhand Bharat concept meant that all states in the Indian subcontinent should come under one central authority. His concept was realized by Chandragupta Maurya who conquered all the princely states to form a territory having the semblance of Akhand Bharat.

Following the partition in 1947, RSS started propagating the concept of ‘Akhand Bharat’. On August 24, 1949, M.S. Golwalkar, then supreme chief of the RSS, termed Pakistan as an ‘uncertain state’ and stated that efforts should be continued to amalgamate both India and Pakistan. He reiterated his view in Kolkata on September 7, 1949. On August 17, 1965, Bhartiya Jan Sangh, precursor of BJP, passed a resolution which stressed on the unification of India and Pakistan. H.V. Sheshadri, who served as RSS General Secretary from 1987 to 2000, wrote in his book, The Tragic Story of Partition, that Pakistan and Bangladesh will realize one day that their ‘physical and mental happiness’ could result only from their unification with India. In December 2015, BJP’s General Secretary Ram Madhav said that it is his belief that Pakistan, India and Bangladesh will reunite one day to form Akhand Bharat.

Meanwhile, the rise of Hindutva outfits in India is seen as a source of threat to the regional peace. Hindutva outfits have a long history of fomenting trouble and havoc in South Asia. India’s relations with Nepal have been affected since Nepal became a secular state in 2006.  Following the decision to become a secular state, Hindutva forces increased their rhetoric and exploited the confusion of the Nepali Hindus. Nepal Defence Army (NDA) and the Ranvir Sena were the main Saffron terror groups operating in Nepal. Prior to disbanding in 2009, these groups were involved in several bombings, assassinations of prominent personalities, extortion and abduction.

Pakistan remains the main target of Hindutva outfits. In fact, the RSS attempted to carry out what can be constituted as the first terrorist attack by a foreign group on Pakistani soil. Hindutva outfits have a long history of targeting Pakistanis and Pakistani products in India. The 2007 Samjhauta Express bombing, carried out by Abhinav Bharat, resulted in the deaths of 68 Pakistanis. Maharashtra Navnirman Sena, a Maharashtra-based Hindutva organisation, is regularly involved in attacking outlets selling Pakistani products and threatens Pakistani artists and sports players. Hardline Hindutva outfits like Bajrang Dal and Vishwa Hindu Parishad call for attacks on Pakistan in order to punish Pakistan for killings of Indian soldiers; alleged involvement in terror attacks in India, and to take control of Pakistan administered Azad Jammu and Kashmir.

In recent years, India’s relations with Bangladesh have seen many ups and downs due to Hindutva policies adopted by Indian government. During the election campaign for the 2014 General Elections, Modi resorted to communally charged Bangladesh-bashing. He, along with other BJP leaders, accused Bangladeshi Muslims of destroying India. Following the assumption of power in May 2014, one of the first tasks undertook by Modi was to starve Bangladesh of beef by stopping India’s surplus, non-milk producing cattle, from being exported to Bangladesh. On the other hand, attempts by BJP to confer Indian nationality on Bangladeshi Hindus is seen as a step through which India wants to impress that the Bangladeshi government is unable to protect its Hindu population and therefore those Hindus are fleeing to India. As part of India’s hegemonic designs, it has been able to install a pro-Indian government in Sri Lanka and is pressuring Maldives to accept greater Indian influence.

With the increasing tendencies of Hindu nationalism dwarfing the secular outlook of India, it is important for India’s neighbouring countries to chalk out either a joint strategy or country-specific strategy to deal with the spill over effect of Hindutva ideology. International community should exert pressure on India to keep a check on the Hindutva outfits and those propagating the Hindutva ideology. Failure to combat Hindutva ideology and outfits will add to complexities in the region which is already marred with various conflicts and disputes. Consequently, this will also result in retribution from minority groups like Christians and Hindus who will be able to garner support to their cause in order to counter the rise of Hindutva outfits.